The Gujarat Fortunegiants approach season 7 of the PKL probably wondering what they must do to get past that final hurdle. The most successful of the four new teams that have joined the PKL, they have been the side to beat in PKL 5 and PKL 6 but on both occasions, faltered at the final hurdle with the title within touching distance.  It’s a team that is built around the nucleus of Coach Manpreet’s squad – cover defenders Sunil & Parvesh and lead raider Sachin Tanwar – all of whom have been retained / bought back by the squad, together with Rohit Gulia (2nd raider) and right corner Ruturaj Koravi.

The ethos of the team is built around honing young talent and largely features no superstar names to make it a one-man-army; and that mantra has worked through Manpreet’s ability to find and nurture new talent but most importantly the ability to play Pro Kabaddi as one cohesive unit the minute they set foot onto the Kabaddi mat. The lack of leaders who can step up is still a concern for the squad with the team still being extremely young (in terms of age & experience at this level) and that puts a little extra pressure on young captain, Sunil Kumar and also on the Coach himself. Sunil & Parvesh have been the glue to this setup for two seasons straight but if teams find a way past them, Gujarat will need to manufacture a plan B very quickly in PKL 7. The squad has however lost the services of a key left raider in Prapanjan and wear a slightly depleted coat this time in the raid department although it gives usually underutilized men like More GB, Abolfazl and the returning Gurvinder an opportunity to make a real mark on the league and give their careers a huge boost. Vinod Kumar comes in from U Mumba as a real asset to this squad as a perfect team man who can chip in with his raiding and defensive skill and could be a key man to watch but the early prediction is that it could be a season where the Fortunegiants might find it hard to replicate their fortunes of the last two seasons. 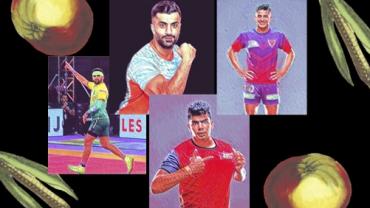