The Inspiring Story of Jamuna Venkatesh- The First ever Woman Kabaddi Referee in India!

Jamuna Venkatesh- A Kabaddi referee who started her career as a player and then was forced to switched roles. Now she is one of the well-known Kabaddi referees in the country. She is also the first women Kabaddi referee in India. Read on to find out about her inspiring journey. Jamuna Venkatesh is the first women referee in India. We are Kabaddi Adda got the opportunity to talk to her about her Kabaddi journey, which is nothing short of exhilarating!

Kabaddi was a part of Jamuna's life from a very young age. She hails from Karnataka and has represented the state in the Junior and Senior Nationals several times. She married N Venkatesh, who was also a Kabaddi player and he was a very good one too. Venkatesh represented Karnataka Police as a captain for a mighty 10 years. He is an Ekalavya Awardee. She got a job offer with the Karnataka Police under the sports quota, but she did not take the offer. Post her wedding, Jamuna continued playing Kabaddi for a club, and Venkatesh played for Karnataka Police.

''We both played many tournaments, with Venkatesh representing  Karnataka Police and I represented my club. Kabaddi was everything for me. I always used to be in the ground either practicing or playing tournaments'',  Jamuna fondly remembers.

Just when everything was going well for Jamuna, things took a turn for the worse. Jamuna and Venkatesh both were part of the national games camp in Manipur. Both of them were important players for their respective teams. However, circumstances (which she did not want to disclose) made Jamuna halt her Kabaddi journey here.

''I cried a lot. I even went to the office and created a ruckus. It was very disappointing not to succeed. And I decided to leave the sport'',  remembers Jamuna.

Jamuna stopped playing Kabaddi. Luckily for her, one of her well-wishers, Mr. Shaman Gowda from the police department was keen on ensuring Jamuna does not leave Kabaddi. He insisted that she starts officiating Kabaddi matches. At first, Jamuna turned him down. However, Mr. Gowda persisted and convinced her that officiating would add a new dimension to her career. She went on to write the state-level exam first and then the All-India exam for referees, she cleared both exams and renewed her Kabaddi journey.

Jamuna Venkatesh went on to become the first Women referee in the country, a huge achievement in Indian Kabaddi. With her mentor Mr. Shaman Gowda's continuous support, she started officiating men's matches. She was given important matches from the beginning and this helped her build confidence.

She started working hard to become one of the best referees in the country. She made her national's debut in the 37th Junior National Kabaddi Championship in Chennai. She had a memorable tournament where Late Jarnadhan Singh Gehlot was impressed by her officiating skills. She was soon on the flight to Malaysia for the 2nd Junior Asian Championship in 2009.

''Gehlot sir invited me to stage and asked me if I had a passport. I said -  No. He asked me to get my passport ready in a month. I will be traveling for an international tournament in Malaysia."

The 2nd Junior Asian Championship marked her growth as a referee. Today, she is often a part of every big event in the Kabaddi ecosystem- National and International. She has officiated close to 30-35 tournaments, including marquee events such as Mens' Kabaddi World Cup, Womens' Kabaddi World Cup, Dubai Masters,  Pro Kabaddi League, Federation Cups, Senior Nationals, Junior Nationals, Sub-Junior Nationals, and various other A-grade tournaments. She was recently seen in Ayodhya for the 68th Senior National Kabaddi Championship Men as a referee where she officiated the tournament Final between Indian Railways and Services. She was part of the Pro Kabaddi League from season 1-6, where she won the best referee award in season 5 for her officiating skills. She is known for handling complex raider touch situations and more often than not she always gives the right decision under pressure.

''If you are nervous about officiating in a particular game, be open and inform that you are nervous and you will support the game in any other way. Do not officiate games where you are not 100% calm and confident. One decision can change the virtue of a match and change the lives of players so we need to be on our toes.''

Jamuna Venkatesh is one of India's leading Kabaddi referees. She is an inspiration for all women aiming to make a career out of Kabaddi. In such a male-dominated ecosystem, it takes grit and courage for a woman to stand up and deliver. Hats off to referee Jamuna Venkatesh and more women power to Kabaddi. 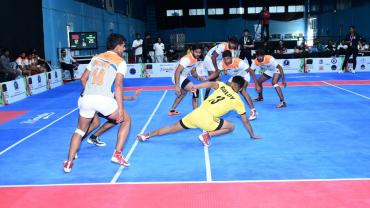 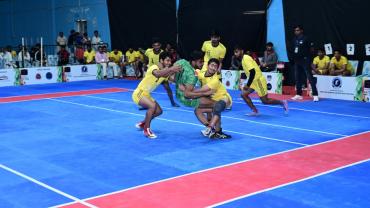