Janardan Singh Gehlot, founding president of the International Kabaddi Association and AKFI President for 28 years, passed away yesterday at the age of 77. Gehlot has dedicated his life to Indian sports, especially Kabaddi. He envisioned Kabaddi becoming an internationally recognised sport.

1984, Los Angeles Olympics happened to be the first international platform where Gehlot got a chance to promote Kabaddi. He met representatives of many participating countries and spoke to them about the sport of Kabaddi.

1986, Asian Games in Seoul, South Korea was another big event Gehlot was waiting for. His vision for the sport of Kabaddi was so clear that he carried promotional material from India to share during the event. Fortunately, officials from all participating nations were staying in the same hotel and he found the right opportunity to promote Kabaddi among the officials. Day time was fixed to watch the games and evenings were spent in promoting Kabaddi & distributing promotional materials among the officials. The focus was on getting the officials to introduce Kabaddi in their respective countries and induct Kabaddi in Asian Games.

There were several challenges but China being not a Kabaddi playing nation was a major one. To resolve this issue, he invited tall well-built basketball players from Beijing Sports University, China to Jaipur. He got the Indian coaches to train them into playing Kabaddi. This exercise encouraged them to include Kabaddi in the Asian Games by creating a  China Kabaddi team. For the first time China played Kabaddi in the Beijing Asian Games and finally the Indian sport of Kabaddi was included in Asian Games.

Asian Kabaddi Federation was founded in Beijing just after the Asian Games concluded and he was elected as the first President of the newly formed Asian Kabaddi Federation. Initially, the Federation consisted of only 3 members India, Bangladesh and Nepal. Things started progressing post 1990 Asian Games as Kabaddi was getting popular in neighbourhood countries and overall Asia. But Ghelot faced a setback in 1990 when the Olympic Council of Japan dropped Kabaddi from the list of games. The reason given was that the Kabaddi Federation of Japan was not affiliated with the Olympic Council of Japan.

With his contacts back in Japan he started working on getting the affiliation & later Hiroshima Asian Games Committee agreed to include Kabaddi but with a condition that cost of travel, accommodation, food of all Kabaddi players and officials shall be borne by Asian Kabaddi Federation. Asian Kabaddi Federation itself was struggling to arrange funds to run day to day operations. Ghelot managed to arrange funds with the help of his friends and got all the teams to participate in Hiroshima. The aim was to ensure the continuity of Kabaddi in Asian Games.

One of his major contributions to the sport has been the change of rules, ultimately giving birth to modern Kabaddi as we know today. Earlier with just baulk and back lines and no bonus line, games used to be slow and low scoring. E Prasad Rao then Sports Authority of India coach and Girish Bhargava, Referee Board Chairman were roped in to bring the changes. Bonus line was introduced and suddenly the game changed from slow to fast paced game with more action happening between the Baulk and Bonus line. Gehlot gives the credit to E Prasad Rao and Girish Bhargava in making this change, often understating himself. Outside of his contributions to Kabaddi, he was also the President of the Rajasthan Olympic Association. He also served under Congress as the Minister of Food Supply. There is no question about it that Janardhan Singh Ghelot played an integral part in making Kabaddi an internationally recognized sport. 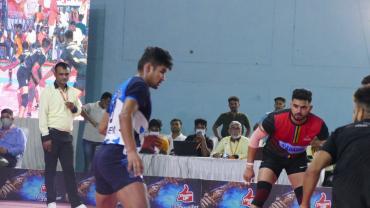 Top 5 Raiders who stole the show at the 68th Senior National Kabaddi Championship!