Top 5 Raiders who stole the show at the 68th Senior National Kabaddi Championship!

The 68th Senior National Kabaddi Championship concluded on 16th April 2021 with Indian Railways successfully defending their title. Read on to find out the top 5 raiders who were at their very best in the tournament. 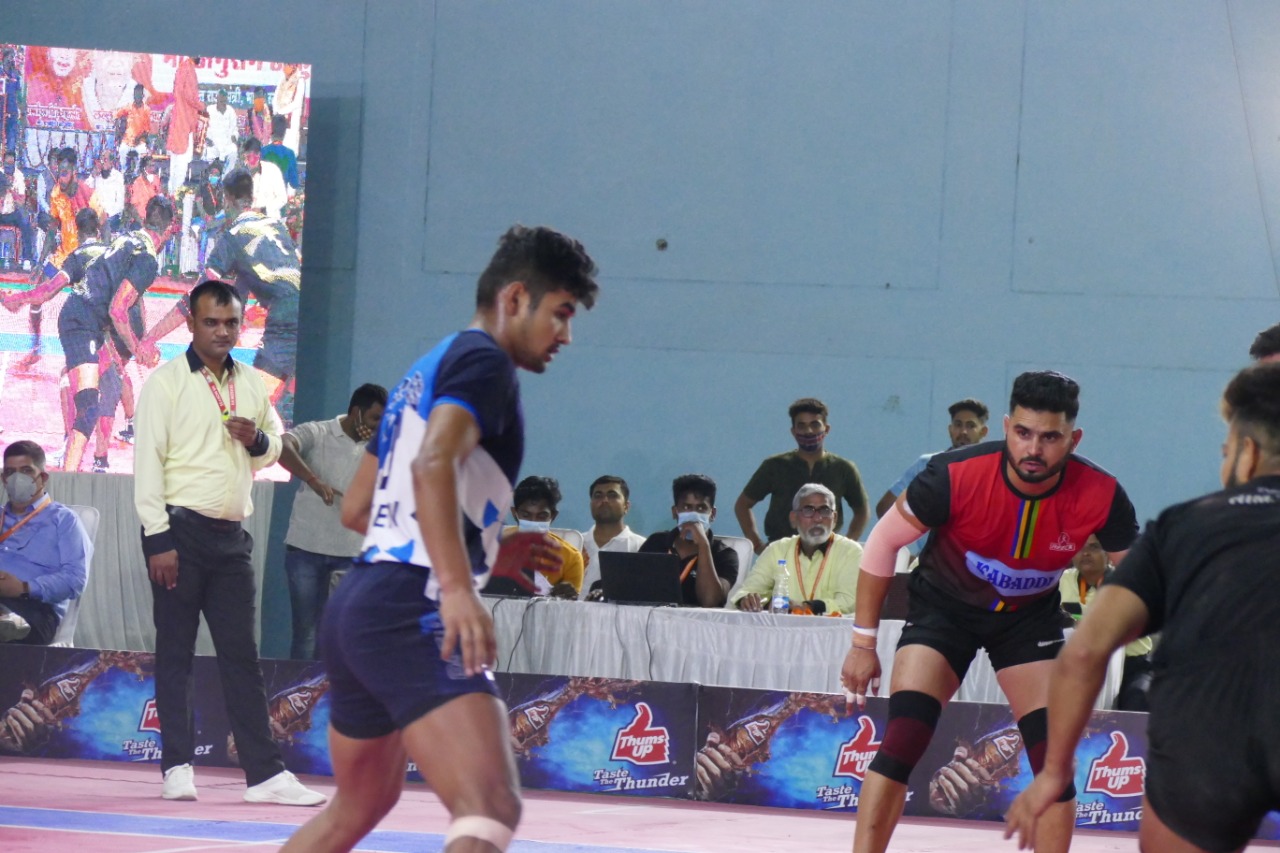 68th Junior National Kabaddi Championship took place from 13th April to 16th April 2021 at Dr. Bhimrao Ambedkar International Stadium, Faizabad, Ayodhya. The tournament was conducted successfully under strict following of Covid-19 guidelines where every player was tested before the tournament by UP Kabaddi Association. Special mention to UP Kabaddi Association for conducting this tournament in a tough situation like these. Indian Railways dominated the tournament and successfully defended their title for the 3rd time in 3 years to make it Hat-trick of championship. Services finished as runners up in the premier national Kabaddi tournament similar to previous year. The tournament saw top class players showcasing their game and it was high intensity Kabaddi action for 4 days. Here are the top 5 raiders from the tournament who were on top of there game at Ayodhya.

* note: All points mentioned in this article are calculated from the Pre-Quarter Finals onwards.

Naveen express was seen in action for the Services team and he was at his usual best as he piled up 47 raid points in 4 knockout games he was part of. But this was not enough for Services to get their hands on the trophy as they went down to Indian Railways in the final.

Naveen Kumar started off the knock out schedule against Tamil Nadu in the Pre-Quarter Final where Services were all over Tamil Nadu and did not give them a chance to come back into the game. Naveen played an important role in the big win for Services. He scored 15 raid points in the 18 raids he went, and took the game away from Tamil Nadu. He was in action from the word go as he kept scoring points at will to help services win the game by 32 points. Next came the Quarter Final against a strong defense unit of Himachal Pradesh featuring Surender Singh and Vishal Baradwaj. In that game Naveen again stamped his authority by scoring 9 points in 14 raids to help Services cruise their way into the Semi-Final of the tournament. Then came the Semi Final where Services went up against a strong Maharashtra unit and this game turned out be an nail biter as both teams did not give up that easy. Naveen scored 13 points in the 18 raids he went, he also received good support from Arjun Deshwal as Services went on win the game with the scores of 40-38. In the All important final Naveen was the lone warrior for Services as he piled up 11 raid points in the game out of the 23 total points of the Services team but this was not enough as Services went down crashing to a strong unit of Indian Railways.

Hi-Flyer Pawan Sehrawat makes it to number 2 of the top raiders list in the 68th Senior National Kabaddi Championship. This comes as no surprise as Pawan had one of the most memorable tournament in recent times where he led Indian Railways to their 3 consecutive Senior National Title. Pawan was seen at his usual best for Railways and played a crucial role in the knockout phase of the tournament for his team.

Pawan started off the knockout with 14 points in the Quarter Final against Chandigarh, the game was an interesting one as Chandigarh were giving a good fight to the Railways unit. But 14 points from Pawan made sure that Indian Railways made their way to the Semi Finals. In the Semi Final, Indian Railways went up against a good looking Rajasthan. In that game again Pawan showed some real raiding skills to take Indian Railways home in a one sided encounter. He scored 12 points of the 17 raids he went for and helped Indian Railways win the game a score difference of 15 points to book a place in the important final of the tournament. Then came the final of the 68th Senior National Kabaddi Championship, Pawan was up against a strong Services unit, a repeat of last year's final. Pawan's game in the final will go down as one of his best performances in his career, such a high pressure game and he delivered. He scored a whopping 21 points in the match and single handedly won the game for his team. In the final Pawan saved all-out for Indian Railways a total 7 times where he was the lone person on mat for his team and this made sure Railways won game with some dominance and a score difference of 21 points. Though he did not start the game that well but he made sure he found a way out and ended up with 21 points to take Railways to another Senior National title.

Deepak Niwas Hooda was seen in action in the 68th Senior National Kabaddi championship as he led the Rajasthan team in the tournament. Deepak was in top form through out the tournament and was seen scoring a lot of multi-point raids and helping his team win by huge margins. But his effort could not take the team through to the finals as they went down crashing to a strong Indian Railways in the semi-final. In the semi-final Deepak did not take part as he was unwell before the game and Rajasthan had a big void to fill and it did not go their way.

Deepak played a part in two games in the knockout stages for Rajasthan and both games he was on song as he piled up 39 points in those two games. In the Pre-Quarter Final against Bihar, Deepak was at his best as he scored 15 points to help Rajasthan get across the line in a closely fought encounter where Rajasthan won the game by a margin of 6 points to make it to the Quarter-Final clash against Karnataka. In the QF clash against Karnataka, Deepak pulled out one of his best performances in recent times and made Karnataka defense look clue-less. He scored a total of 25 points in just 15 raids he went for, in the game he scored multiple multi-point raids which also included an 4 point raid to stamp authority. Sadly this was the end of the road for Deepak in the tournament as he was unwell and could not take part in the Semi-Final against Indian Railways.

Rathan K's performance in the 68th Senior National Kabaddi Championship came as a surprise for all as he scored 36 raid points in two games he played in the knock out phase of the tournament. He was seen at his best for Karnataka as he was leading the raiding department for his team.

Rathan's first game in the knockout phase of the tournament was against Delhi in the Pre-Quarter Finals, and this turned out to be a memorable game for him as he scored 23 points out of the 28 raids he did. This game he unstoppable as he was scoring points at will to help Karnataka easily beat Delhi with a score of 54-37 and help them qualify to the Quarter Final of the tournament. In the Quarter Final against Rajasthan, Rathan had a great game as he scored 13 points in 16 raids but this was not enough as Karnataka went down to a good looking Rajasthan who were riding on a dream performance by Deepak Niwas Hooda. Rathan was the lone warrior for Karnataka in the Quarter Final as he did not get any support from his team mates.

Siddharth Desai was seen in action for Maharashtra this time in the 68th Senior National Kabaddi Championship. He is usually seen in action for the Indian Railways but it was not the case this time as Railways have enough raiders who can start. He played an crucial role in helping Maharashtra make it to the semi final of the tournament and his performance in the knockouts were valuable to his team as he piled up 33 raid points in the 3 games.