Who are the K7 Kabaddi Rising Stars?

Many will attack and conquer but, there will always be bravehearts who defend and thrash out those who dared to attack their fort. Such gems - we call them THE RISING STAR OF K7 KABADDI. 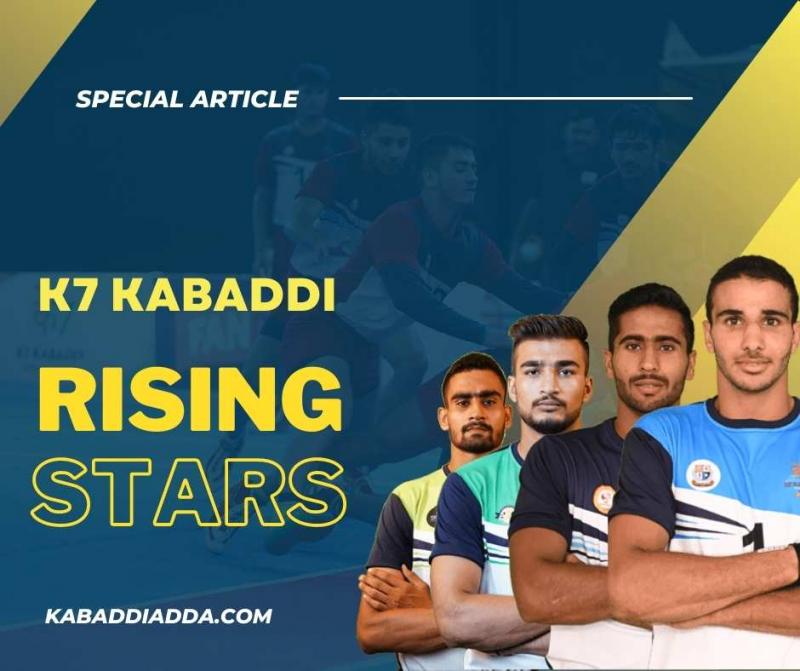 K7 Kabaddi - The first-ever professional year-round kabaddi tournament for junior players. It is aimed at the well-being and lifelong success of young kabaddi players. K7 Kabaddi has proven to be a platform for Young Kabaddi Players to showcase their talent and to be identified as the Future of Kabaddi.

Meetu was born and brought up in Naultha village, Panipat district, Haryana. Meetu Sharma joined Mohit Goyat in the Bhaini School squad in the 2nd edition of the K7 Kabaddi tournament and mesmerised Kabaddi fans with his performance. Kabaddi legend and coach Rakesh Kumar's team Haryana Steelers signed Meetu Sharma outside the Auction in Season 8 of PKL. When asked what is your ultimate goal Meetu said:

"My ultimate goal is to play for the Indian Kabaddi team, win the Asian Games gold medal, and finally win the Arjuna Award in Kabaddi.''

Rakesh Sangroya also known as Kaali from Geon Village, Kaithal District, Haryana. Rakesh played in the K7 Kabaddi Stage Up tournament from team NK Kabaddi Academy. Rakesh was the best raider of Pool A stage of the tournament. Sensational raider of his time and now a commanding coach Manpreet Singh of Gujarat Giants identified Rakesh and signed him as an NYP outside the auction for PKL season 8.

Jaideep Dahiya the left cover defender played for Bhaini School team at K7 Kabaddi Stage Up Tournament and joined the squad with Meetu Sharma and Mohit Goyat to make the team stronger. Jaideep is having a dream debut season in Pro Kabaddi League as he was also signed outside the auction by Coach Rakesh Kumar for team Haryana Steelers as an NYP.

Ashu Malik also known as "Baali vala" was the best raider of K7 Kabaddi Stage Up tournament, Ashu scored 176 raid points in 12 matches for his team AAA Academy. Looking at his brilliant performance at the K7 Kabaddi tournament, the management of Dabang Delhi KC franchise signed Ashu Malik outside the auction as an NYP and now he's been playing as a supporting raider to Naveen Kumar Goyat in the Pro Kabaddi league.

Rohit Raghav - an impressive all-rounder who was part of NK Kabaddi Academy squad in K7 Kabaddi Qualifiers and K7 Kabaddi Stage Up Tournament. After the 1st edition - K7 Kabaddi Qualifiers, Rohit impressed many selectors who scouted him to the Indian Army under Sports Quota, but this was not the end of his achievements, Rohit was on the auction list and was spotted by Bengal Warriors' Coach BC Ramesh, who bought him in the auction. Here is a glimpse of an allrounder defending from In-Position.

Not just another Gulia in Kabaddi. Sahil Gulia was part of Parveen and Jasvir Kabaddi Academy team at the K7 Kabaddi Stage Up Tournament. This team was a wild card entry to the tournament and surprised everyone with their runner-up finish. Sahil Gulia was signed by Tamil Thalaivas outside the auction as an NYP and now is been showing a rock-solid performance under the guidance of captain Surjeet Singh and Coach Uday Kumar.

Bharat Naresh the tall lanky raider played at K7 Kabaddi Stage Up tournament from Deepak Niwas Hooda's team DNH Foundation. Due to Bharat's tall solid body, he had to lose weight to play in K7 Kabaddi and he was so focused and lost 9KG just to play in K7 Kabaddi which caught the attention of a lot of coaches. When asked why were you so keen to play in this tournament that you were putting yourself at the risk of injuries, Bharat Said:

"If I won't try for my best to show my talent then nobody will see my game, I believed that this was my chance to shine"

Bharat was later signed by Coach Randhir Singh Sehrawat for team Bengaluru Bulls, and now he is playing alongside Pawan Sehrawat.

The best defender of K7 Kabaddi Stage Up Tournament and scored 66 tackle points in 15 matches with a tackle strike rate of 42%. Krishan was the right corner defender of the title-winning team NK Kabaddi Academy. On the day when NK Kabaddi Academy was celebrating their victory, Krishan was celebrating the call he got from Dabang Delhi KC and was hoping to get his confirmation letter from the franchise.

We have already seen, all these players showing their game in the professional league, But there are a few more Rising Kabaddi Stars who have not got the opportunity to showcase their talent but we're confident that they are the gems.

Manish Dhull the left cover all-rounder comes from Pai Village and his village has had a lot of Kabaddi talents. Manish started his Kabaddi journey after years of practicing wrestling. He was part of the title-winning team of K7 Kabaddi Stage Up Tournament, NK Kabaddi Academy. He was not just the defender but was leading the charge of the team as a captain. After his performance at K7 Kabaddi, Coach Ram Mehar Singh signed Manish Dhull outside the auction as an NYP of team Patna Pirates.