After an exciting Day 1 of the selection tournament, some fans awaited the games of their favorite teams. Day 2 of the 69th senior state championship, Rajasthan kicked off yesterday morning with some of the most intense matches. The atmosphere in the Jaisalmer court was tense as the tournament escalated to the pre-quarters stage.

Now let's look at how the teams performed on Day 2.

The men's format saw some of the most exciting games in Kabaddi. The Alwar vs Nagor match became a high-scoring game as Alwar beat Nagor 74 - 59. On the other hand, Ajmer and their opponents had a last-minute finish. Ajmer managed to beat Hanumangarh 41 - 38. Sri Ganganagar and Rajasthan Police team had a one-sided game against their opponents. Sri Ganganagar defeated Sirohi 35 - 15, whereas Rajasthan Police clinched victory over Bhilwara 38 - 08. Churu beat Jhunjhunu as the final whistle ended with 58 - 34. The Tonk vs Dholpur was the low-scoring game of the day, with Tonk defeating their opponents 26 - 16. Barmer had to accept defeat against Sawai Madhopur with a score of 30 - 50. The host of this tournament defeated Jaipur as the game ended 66 - 48. Lastly, Jodhpur defeated Jalore 37 - 23.

The women's group stage also featured some exciting games. Nagaur clinched victory over Barmer with 44 -16, and Bhilwara defeated Rajsamand 42 - 35. Bharatpur had a one-sided match as the score against Jaisalmer ended with 52 - 33. Similar conditions were witnessed in the Ganganagar vs Jodhpur match, as Ganganagar ended the game with 26 - 01. The Alwar vs Bikaner game was the one that fans enjoyed the most, as the game had a catastrophic end. Bikaner defeated Ajmer 64 - 61. 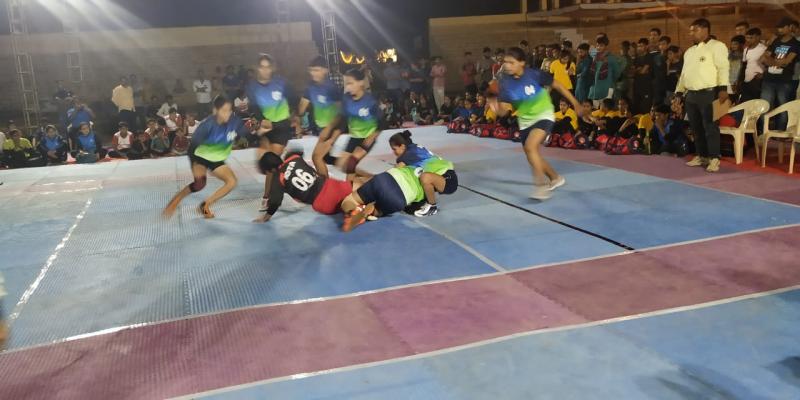 The tournament escalated to its pre-quarter stage after some of the best games in Kabaddi. The men's format began with Jaipur defeating Jhalawar 36 - 07 and then moved on to the Rajasthan Police clinching victory over Kota 46 - 11. Bikaner accepted defeat as they lost against Alwar 57 - 27. The last game featured Chittorgarh and Sawai Madhopur, where the former lost against the latter 17 - 39.

In the women's pre-quarter stage, Sikar defeated Pali with a huge margin of 61 - 03, and Churu won their game against Tonk with a score of 39 - 24. One-sided games continued to be witnessed as Jhunjhunu defeated Udaipur 67 - 19 and Jaipur ended the game against Ganganagar with 45 - 12. Ajmer had the upper hand in their game as the score against Bikaner ended with 47 - 33. Nagaur reached the half-century of points as their game against Sawai Madhopur ended 51 - 25. Hanumangarh and Bharatpur were the winners as the Hanumangarh vs Bhilwara game ended with 49 - 07 whereas the Bharatpur vs Bundi game with 52 - 16.

Did your team win? Follow KabaddiAdda for such detailed scores.