Gotegaon: ONGC, Sonepat won the title of 38th All India Mens Kabddi Championship organised by Sahyog Kreeda Mandal, Gotegaon, Madhya Pradesh. ONGC, Sonepat beat Airforce, Delhi in their final battle in the tournament by 38-24 and lift the title. Meetu's marvellous performance in both raiding and defence was superb, where as Naveen Kumar who got injured during the match, couldn't pull out his magic. 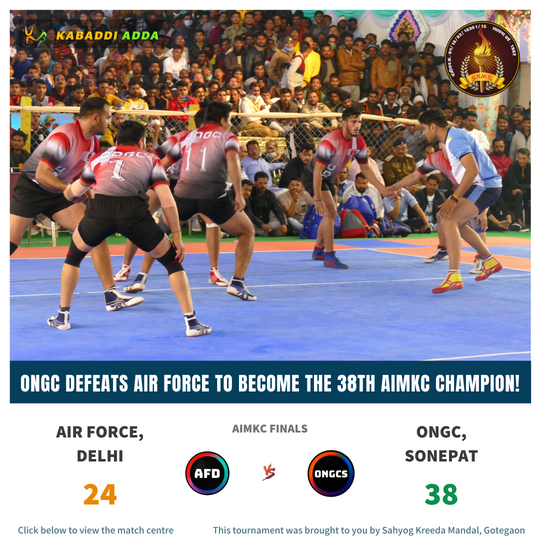 Pro Kabaddi Star Raider Naveen Kumar who known as 'Naveen Express', got injured during the match in his second raid and couldn't play the rest of the match. His injury cost Air force, Delhi the final match and title of the tournament. Naveen was his second raid which was a Do-Or-Die raid did a dive to get a touch point but landed on his knee and started feeling pain. On-ground doctors rushed to him and gave first aid. But he couldn't continue the rest of the match. Naveen was then substituted by Ajay.

In the entire match, we saw ONGC, Sonepat was leading though out. Not even a single time Airfoce could pick up a lead. Sonu and Ajay got 8 and 3 raid points respectively but that couldn't save the Airforce who were lacking the 'Naveen Express'.

Meetu, the player of the match from ONGC, Sonepat showed an astonishing performance in the finals. He scored 11 raid points from his 19 raids and also contributed 2 points by defence as well. Meetu, who completed his Super 10 in the finals, stood as the back bone of ONGC, Sonepat. Meetu bagged a total of 77 points from the entire tournament. 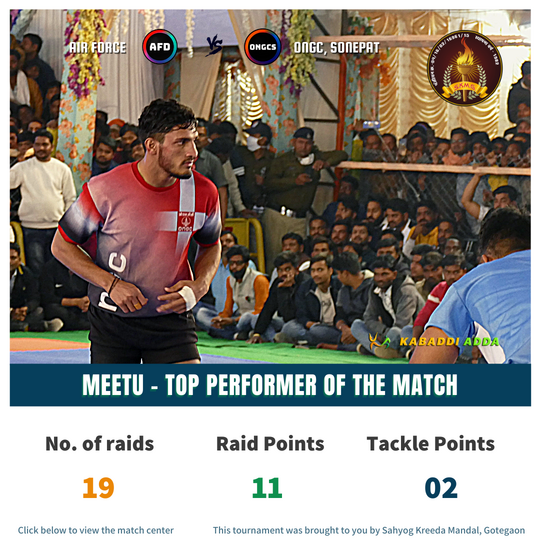 Airforce, Delhi won the toss and chose court. Meetu from ONGC, sonepat started the match with an empty raid. Naveen Kumar who was on his second raid, which was a DO-Or-Die raid got injured in the match and couldn't play the rest of the match. ONGC, Sonepat inflicted the first all out, where scores became 13-4 in favour of ONGC. At the end of half time the scores where, 19-10 in favour of ONGC. On 49th raid, Meetu did a Super tackle on Sonu and marked the score as 22-11. On 53rd raid, ONGC did a super tackle which put Pro Kabaddi player Ajay on bench. Match was finished by Sombir with and empty raid and the final scores were 38-24, and ONGC, Sonepat won the match.