Patna Pirates on a losing spree against Telugu Titans, 3rd in Prokabaddi season 6

On the last day of home-leg Telugu Titans had a flying start, Rahul on first raid scored a point while the dubki king could not stand against the Titans brutal defense and was sent on the bench in his first raid. Nilesh Shalunke was once again on fire and scored a four points super raid in the 2nd minute and Patna Pirates were struggling to pick their first point.

Patna Pirates could pick their first point in the 3rd minute, courtesy substitute Vijay. Rahul Chaudhari and Nilesh Shalunke did the early damage to Patna Pirates and Titans inflicted the first all-out in the 5th minute and took 6 points lead.

Pardeep Narwal failed in the first half and could just score 2 points and Patna pirates defenders failed to stop Titans raiders. Telugu Titans inflicted the 2nd all-out in the 16th minute, took huge 11 points raid which they hold and walked into the half time with 11 points cushion.

In the second half Patna Pirates staged a com-back, Pardeep Narwal recovered as he completed the Super 10 after executing back to back successful raids. In the 28th minute Patna Pirates inflicted the 1st all-out and narrowed the Titans lead to 6 points, but the first half lead kept the Titans in strong position till the end and on the last day of their home-leg, with this comfortable win Telugu Titans gave a reason to rejoice to their fans with 41-36 final score on the board.

The night belonged to Rahul Chaudhari who completed his 800 PKL points in the 4th minute of the game and scored total 13 points in his 24 raid attempts. He was ably supported by Nilesh Shalunke who scored 9 points in 14 raid attempts. In defense Vishal Bhardwaj and Mohsen Maghsoudlou hold the forte with their 4 points each. Pardeep Narwal was slow to pick points in first half with just 2 but he recovered in the second half and scored a super 10. It was the failure of Patna Pirates attack and defense in the first half which took the toll, else they secured 6 tackle points and 13 raid points in the second half. In defense Jaideep scored 4 points in his 5 tackle attempts and Vikas Kale 3 in his 5 tackle attempts. Despite losing, Patna Pirates with 52 points are on second position in the Prokabaddi season 6, Zone B points table. Stay tuned with us as Jaipur Pink Panthers homeleg begins tomorrow and Puneri Paltan will play their last game of Prokabaddi Season 6 against the Panthers: 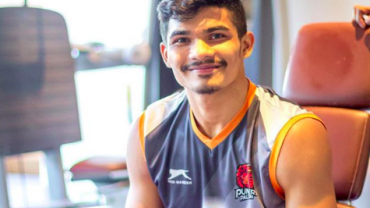