Dabang Delhi KC continued their unbeaten streak in the Pro Kabaddi 2019 as they registered a 46-44 win against Jaipur Pink Panthers in the match number 73 at Sree Kanteerava Indoor Stadium in Bengaluru. Trailing in most of the second half, the Dabangs produced a sensational performance in the final minutes of the game to snatch the victory from the Pink Panthers in the last minute of the match.

The match started with an unsuccessful raid by Deepak Niwas Hooda while Chandran Ranjit picked up five points in the very first raid of the match for Delhi. Within three minutes, Jaipur was all out as Delhi led 11-4. However, Jaipur made a comeback in the next few minutes of the match and inflicted an all-out on Delhi to reduce the gap to just one point. At the end of the first half, Delhi was leading by two points with a scoreline of 21-19.

In the second half of the match, Jaipur made a comeback with Super Raids and Super Tackles as they took a slight lead in the match. Inflicting a second all out on the Delhi team, the Panthers took a comfortable 35-29 lead in the 32nd minute of the match. However, a Super Raid from Vijay and two back to back successful raids from Naveen got the Dabangs a step closer to the win. Chandran Ranjit hit the final nail in the coffin as he got a touchpoint on Deepak Narwal to send the whole of Jaipur team on the bench with just one minute remaining. Delhi were leading 45-43 then and made sure they do not give up their lead and register their 10th victory from 12 games this season.

Naveen Kumar got another record to his name as he registered his 10th consecutive Super 10 of this season.

The Dabangs are still on the top of the table with 54 points, while Jaipur is on 5th position with 38 points to their name.

Jaipur Pink Panthers will be up against Dabang Delhi in the match number 73 of the Pro Kabaddi 2019. Delhi are currently the table toppers and have won six of their last seven matches, with one draw. The Dabangs are in a terrific form this season and would want to continue to dominate in the league. On the other hand, Jaipur have lost three back to back matches and will be looking to bounce back to winning ways at the Kanteerava Indoor Stadium in Bangalore. 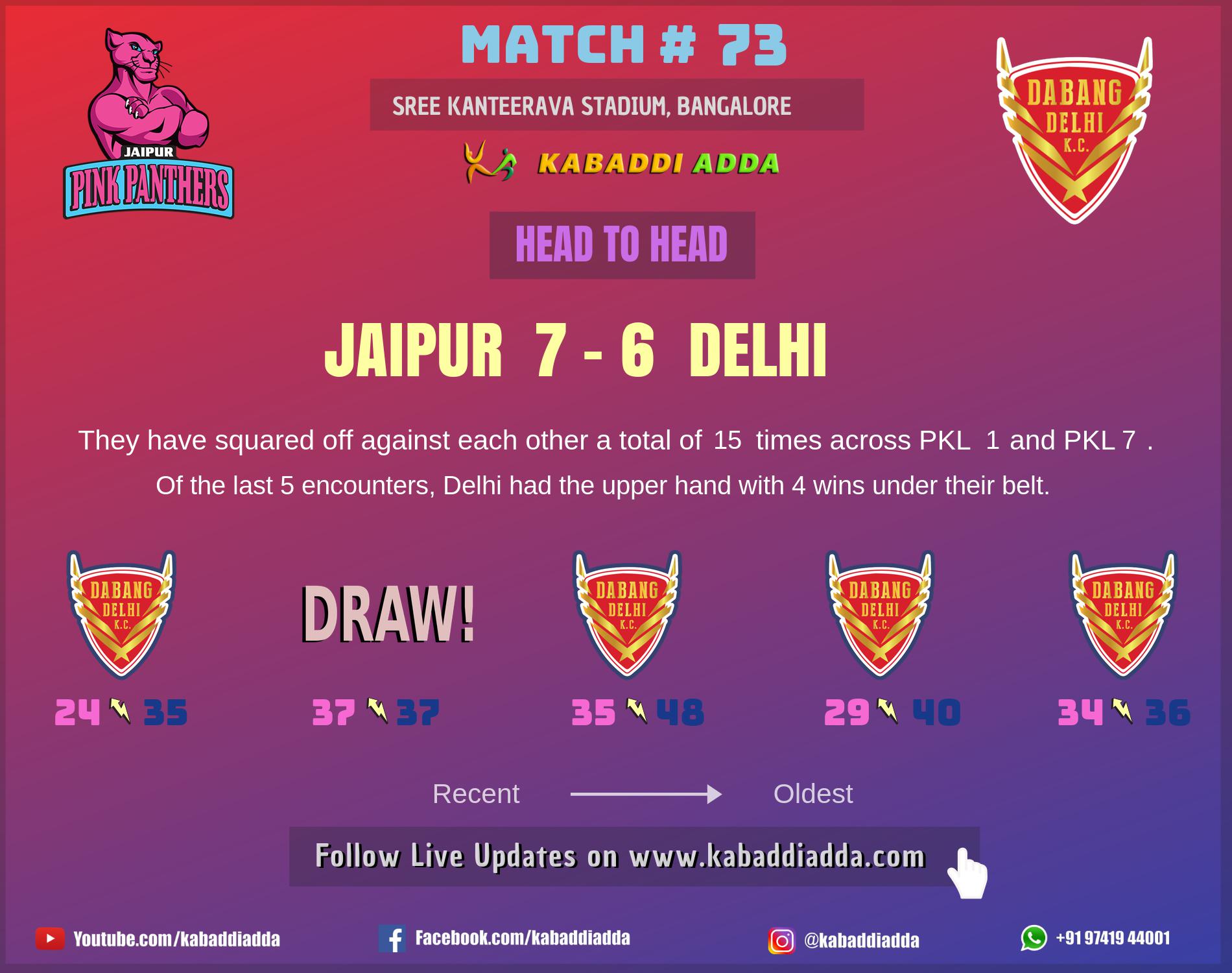