Patna Pirates end their six-match losing streak by registering a 51-25 win over Tamil Thalaivas at the Netaji Subhash Chandra Bose Indoor Stadium in Kolkata on Monday. The star of the show was none other than the captain of Patna Pirates, Pardeep Narwal with a score tally of 26 raid points. He also became the first-ever player in PKL history to score 1000 raid points.

The story of the first half was not complex as it went on the side of Patna Pirates single-handedly. With the efforts of Pardeep Narwal, Patna Pirates inflicted the first all-out of the match in the 9th minute itself. Pardeep then became the first player to reach 1000 raid points with around about five minutes left in the first half as Tamil Thalaivas defense struggled to find an answer for the Record-Breaker. Tamil Thalaivas finally made a super tackle and managed to make Pardeep in the match. Still, after the end of the first half Patna was leading by 5 points with a scoreline of 18-13.

The three-time champions began the second period with intent and enforced a second all-out on Tamil Thalaivas four minutes into the half to extend their lead to 25-13. Pardeep didn't stop after his performance in the first half and started making the defense of Tamil Thaliavas weaker by his raiding skills. Following this Pardeep scored two successive super raids in a row, which inflicted 3rd all-out of the match and straightaway Tamil side was on backfoot.

Pardeep becomes the first player to score 1000 raid points in the history of PKL.

Patna Pirates didn't stop after this as they inflicted the fourth all-out of the match and eventually defeated Tamil Thalaivas by a humungous margin of 26 points.

Tamil will be still smarting from their largest margin of defeat this season. Can they recover quickly from the thrashing and quickly channel that to having a good finish to the season. in the contest of the 11th vs 12th place expect interesting kabaddi. V Ajith Kumar, Rahul has been the lone shining light for the Thalaivas this season and delivered. Can they inspire the rest of the team to step up and win a few on the trot? Patna is another team struggling to lend any meaning to their campaign this season. Although Pardeep is the third-best raider in the league, he has been tackled more often than in the previous season and their defense has just not been able to revive him. 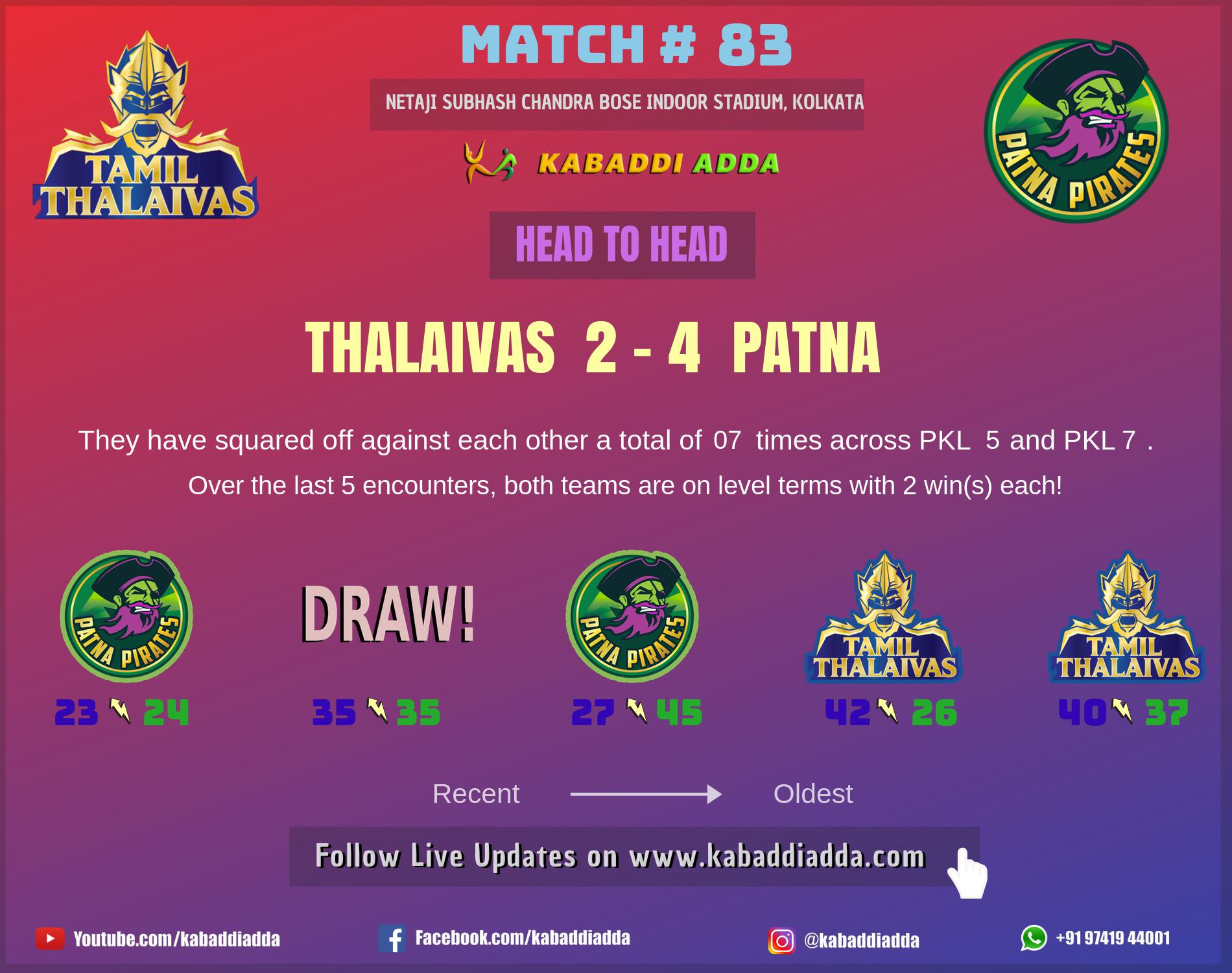