A strong display of defense from the skipper Fazel Atrachali and opposite corner Sandeep Narwal took U Mumba to a 41-27 victory against the Telugu Titans in match number 87 of Pro Kabaddi 2019. Arjun Deshwal contributed with ten raid points while Rohit Baliyan chipped in with three raid points. This is now Mumbai's seventh win from 14 matches, taking them back into the top six of the Pro Kabaddi Points Table.

The match started with an early statement from Sandeep Narwal to put Siddharth Desai on the bench and it set the tone going forward although both teams traded blows early and scores being leveled after every two raids. Telugu Titans leaped when Siddharth Desai went on to score two back to back successful raids and reduced U Mumba to just one man. Rohit Baliyan's unsuccessful raid in the 13th minute meant an All Out on U Mumba and the Titans taking a 13-9 lead. However, U Mumba made a strong comeback and gave away only two points in the next seven minutes as the scores were tied at 15-15 at the end of the first half with Titans down to just 2 men on the court.

Within two minutes of the second half, U Mumba inflicted an All-Out on the Titans as Farhad Milaghardan was tackled by his fellow countryman, Fazel Atrachali. With Abhishek Singh having an off day on the mat, Arjun Deshwal then took matters into his own hands as he went on to give his team a growing lead on the scoreboard. Fazel Atrachali also contributed heavily as he tackled Siddharth Desai twice & kept him out of the game for more than half the encounter. Mumbai inflicted two more All Outs on the Titans in the 21st and 38th minute of the match to take a comfortable lead and win.

Fazel picked up a High 5, while Sandeep Narwal picked up four points for the team. For the Titans, it was only Rakesh Gowda who showed a consistent performance on both the sides of the mat. U Mumba will be playing Bengal Warriors in their next match in Kolkata, while Telugu Titans will be up against Dabang Delhi KC next, in Pune.

Match Preview: Titans look to return to winning ways as they face U Mumba

All eyes will be on Siddharth Desai as Telugu Titans will be up against U Mumba in the match number 84 of the Pro Kabaddi 2019. It will be the second time these teams will be meeting this season, with the last time U Mumba emerging with a 31-25 win. Both the teams have had their share of losses this season and will be looking to return to winning ways today. It will be a chance for U Mumba to get back in the top 6 in the points table.

Head to head: Telugu Titans vs U Mumba 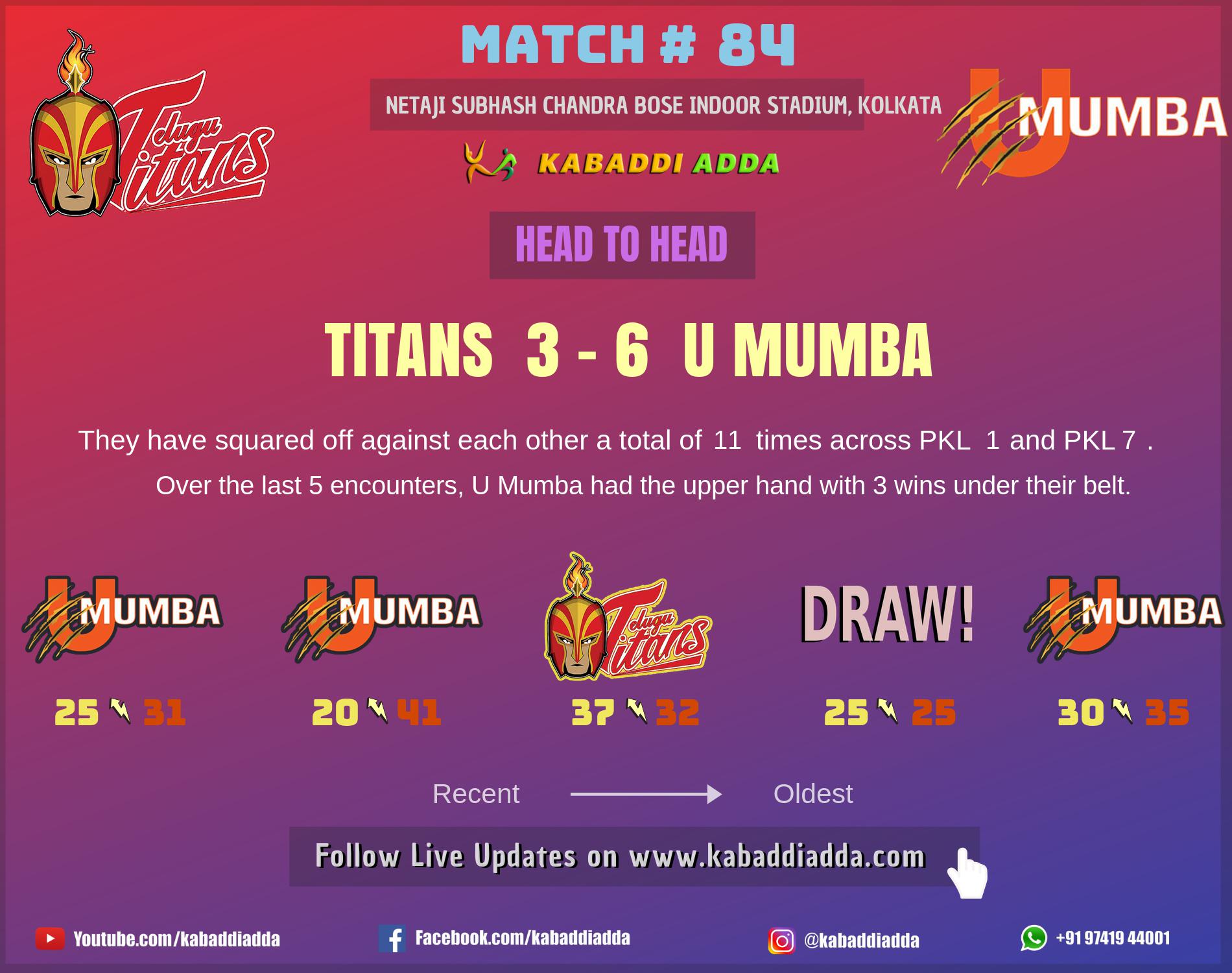