With the growth of Kabaddi over the recent years, it is important to understand the importance of the game in the context of the age and also the certain factors associated with it. Read on for more information.

Cricket, introduced to India, by the British has earned itself the euphemism of being the gentleman’s game. When there has been talk around the sporting culture in India, we have mostly heard about how Cricket has been the dominant game in this country over the years. Not to forget how the World Cup and the other tournaments have played a significant part in terms of increasing the popularity of the game among the masses. While the 1983 World Cup victory was a turning point for the game, the 2007 T20 victory paved the way for a men’s IPL.

Looking at how much success the initial IPL seasons managed to garner, it became evident that if a sport is being conducted in a commercial way, it can facilitate more entertainment for a larger audience, enabling a much bigger universal audience. In the 2010s era, if there is any sport that has managed to become popular through such a type of model, it has to be the game of Kabaddi.

What IPL did for T20 cricket, Pro Kabaddi League has managed to do the same for the game of Kabaddi in India. With the format with which the tournament was conducted, it proved to be quite appealing for the viewers, with its fast-paced action and the 40 minute games, that proved to be effective across both the halves.

But there are certain aspects that would stand differently when it comes to the dynamics for the game of Kabaddi. Cricket, introduced to India, by the British has earned itself the euphemism of being the Gentleman’s Game. As a player matures, his contributions evolve from hitting a quick fire 50 to thinking slower and often more meaningful innings. Gradually a player dons the cap to manage the younger players and bowling plans. And thus a young player can retire gracefully from the sport in their late 30s or early 40s.

Kabaddi is different. It embraces the young daredevils and incentivises the most audacious player. The age where the players usually reach their peak in this game is often in their early 20s. We’ve seen this in recent years as to how the players who have had a spectacular run in the initial seasons, gradually end up not producing the same numbers as the time goes by.

And this is quite understandable considering the nature of the game, in terms of how the players go about playing the game, and how it affects their fitness in the longer run. The reflexes in those moves tend to get slower with time, as the players struggle to deliver the performances for their teams. And players, more often raiders, are prone to injury and quick recovery from injury is necessary to continue to deliver at the highest levels. 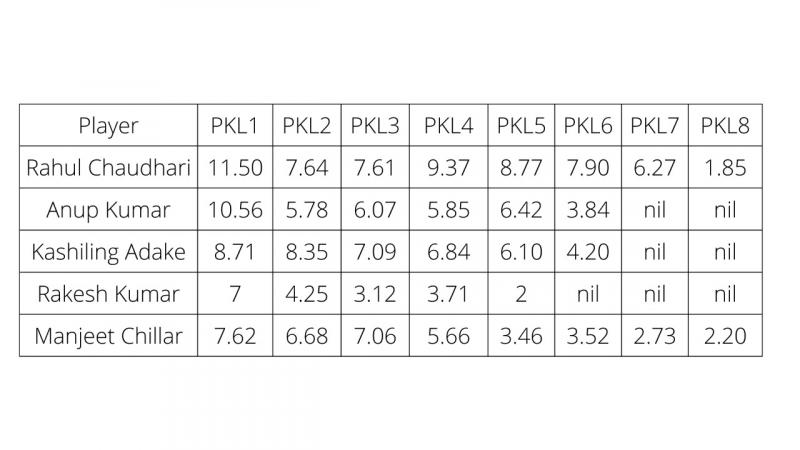 Among the prime examples among the players who went through such a phase would be star players like Anup Kumar, Rakesh Kumar and Kashiling Adake. It is interesting to note that all these players had a spectacular start to their PKL campaigns, and contributed massively to their team’s success in the league.

These players even managed to reach their peak at one point of time during their seasons, but as the time progressed, there was a gradual dip in the form that was evident in the players, which further went on to affect their respective teams in the following seasons.

Thus, it is important to understand the importance that the game of Kabaddi holds for the youth, and the way it holds so much significance for the younger players, as it certainly helps them in terms of delivering the performances being fully fit and agile. That said, players like Anup Kumar and Rakesh Kumar adapted their games from being full-fledged raiders to effective all-rounders and corner defenders later in their careers. Thus compensating and contributing in defence and leadership responsibilities.

As the game of Kabaddi becomes more mainstream and creates real career opportunities, players will innovate and find a way to extend their careers. That said, Kabaddi is a youngster’s game.