On the 31st of May 2018, Mumbai was buzzing with anticipation as the final day of the two-day Pro Kabaddi League auction was underway, with a whole set of youngsters going under the hammer, looking to make a mark in order to carve out a career for themselves and be a part of kabaddi's meteoric rise.

In the 'C' category of raiders, Pawan Sehrawat stole the spotlight as his services were purchased for a sum of ₹52.8 lakh by the Bengaluru Bulls. A couple of minutes later, U Mumba received thunderous claps as they signed the services of Siddharth Sirish Desai for ₹36 lakh, beating bids from the Bengaluru Bulls, Tamil Thalaivas and Gujarat Fortunegiants to have the last laugh.

Fast forward close to five months later and the U Mumba management have the luxury of soaking in the atmosphere as the purchase of Desai has single-handedly titled the scales in favor of the Fazel Athrachali-led side and in the process has also labeled Desai as the 'Next big thing in Indian Kabaddi'. 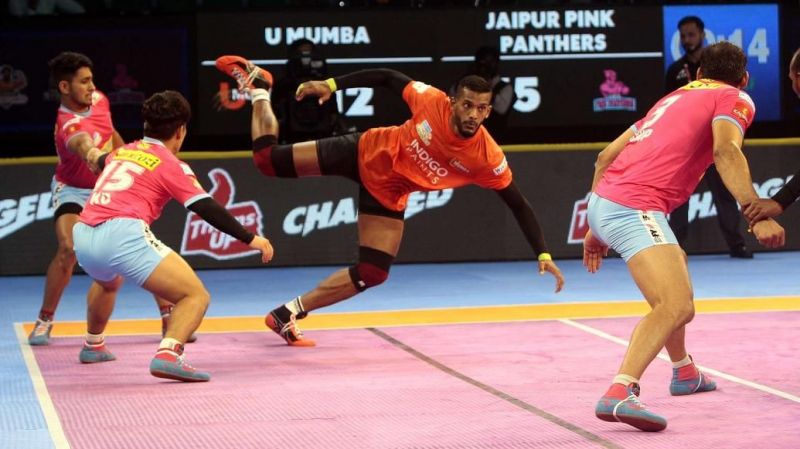 Rookie to superstar - A one-game transformation

Desai, making his debut in the Pro Kabaddi League was faced with the tough proposition of dealing with a pack of hungry lions in the form of the Puneri Paltan, who had the two best corner defenders in the world in their ranks - Sandeep Narwal and Girish Ernak.

Yet, it seemed like a walk in the park for the lanky raider who had the mighty Sandeep Narwal falling at his feet - diving at the feet to make it look respectable - as Girish Ernak had a puzzled look on his face.

That was only the beginning of a storm that was brewing in the league - a storm that came under the banner of 'Siddharth Sirish Desai'.

Swagger and simplicity - Two contrasts in one man

Post the game against Pune, Desai was a force to reckon with for the Jaipur Pink Panthers as he continued his top form with 13 points. However, in his next assignment against the Haryana Steelers, Desai finished with just eight points.

At that stage, it was assumed that it was all a phase and Desai was reaping the benefits for the trust that had formed a sugar coating around the raider.

For the viewers back home, Desai's performances were only a youngster's, who was looking to stamp his authority on the masses. However, for the rest of the kabaddi fraternity, Desai's rise to success in the Kabaddi Nationals, where he excelled for Maharashtra was a major calling card for the raider.

Desai blazed through the opposition with aplomb. Kuldeep Singh's back holds and Sachin Shingade's dashes were all in vain. Even Monu Goyat's return to form after a lean path was thrown into the shadows.

Siddharth Desai was back to form - Picking Super 10s the biggest attraction of his Pro Kabaddi League resume - as he finished with 15 raid points to lead U Mumba to a big 42-32 win.

In U Mumba's fifth match, in the Maharashtrian Derby, Desai was the lone bright spark for U Mumba as he finished with 15 raid points and yet again, made the right corner defender, this time young Shubham Shinde as his main target.

Before U Mumba's next game against the Telugu Titans, Desai already had 65 raid points from just four matches. Facing off against Rahul Chaudhari, one of the best in the business, the headlines all circled around the big battle 'Siddharth Desai v Rahul Chaudhari'.

However, all the hype was put down on the ground as Desai continued on his merry ways on one side while on the other side, Rahul Chaudhari also had another demon eating into him - A landmark of 700 raid points.

The Titans raider did manage to get there with a firm reverse kick on Surender Singh but what followed after was remarkable. The smile was absent on Rahul Chaudhari's face as he knew, in the corner of his mind that he had lost a bigger battle.

The young Siddarth Desai was stealing all the limelight, which once belonged to Rahul Chaudhari. Yes, Chaudhari did manage to get the crowd going but at the end of the game, Desai's raids turned the stadium into a cauldron of noise, while Rahul Chaudhari was left to watch from the sidelines as the youngster was making his mark as the best in the business.

Only six games old in the Pro Kabaddi League, Desai already has 83 raid points to his name and accounts for 34.29% of U Mumba's point this season.

Going by Desai's form, one thing is for sure - The new kid on the block has announced his arrival in style and is slowly growing into the role of the 'poster boy' of Indian Kabaddi.

With these skills no one can best him easily!
Permalink

A force to reckon with. He is super strong and tall with variety in skills to be valuable for atleast a few years. Sometimes demonstrated some immaturity, should change with experience
Permalink