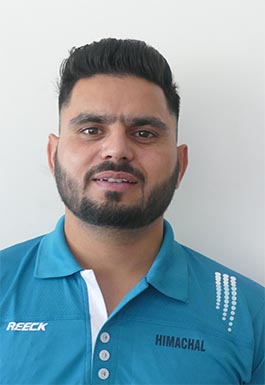 Baldev Singh was born on March 27th, 1993 in a village called Dabhota, Himachal Pradesh. His father Shri Manjeet Singh was also a Kabaddi player who had represented Services (he was in the Indian army) and then later joined Himachal Pradesh Police. Baldev had the great fortune to represent the Himachal Pradesh team which had already contributed stalwarts like Manpreet Singh and Ajay Thakur to Indian Kabaddi.

His mother Shakuntala Devi inspired him to play Kabaddi and be an excellent player of the sport. He started his Kabaddi voyage from his school days while he was in the second standard. Rakesh Chandel was his first coach and he was the one who helped hone his skills in Kabaddi. Rakesh Chandel was known for his stint with the Indian team during the South Asian Games 1995 (Madras) where the team won the gold medal.

His first formal training of Kabaddi occurred in Dabhota Sports club where he worked on his defensive skills like Thigh hold and Chain tackle. He was chosen by Sports Academy of India and was trained in Bilaspur location from 2010 to 2014 under the tutelage of Coaches Om Prakash and Rathan Lal Thakur. He started representing Himachal Pradesh from 2013 and played with Ajay Thakur number of times.

He regards winning the gold for team India at the International Invitational Men's Kabaddi Tournament held in Kathmandu, Nepal in 2017 to be one of his greatest achievements. Baldev is considered to be one of India’s future prospects in the defensive department. He was selected for the South Asian Games 2019 as the right corner for the Indian team under Deepak Niwas Hooda and won the gold medal.

He is a right corner defender and excels in blocks and chain tackles. His signature move is back hold where he disrupts the raider by holding from behind and breaks the momentum and with the support from his team, completes the tackle.