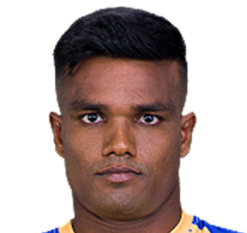 Vijin Thangadurai born on May 20th, 1990, hails from the district of Tirunelveli, Tamil Nadu. Vijin is an engineering graduate from PSN College Of Engineering and Technology, Tirunelveli.

His debut in VIVO Pro Kabaddi League was in season 2, where he was drafted to the Bengal Warriors. He proved to be an efficient right cover for the team in his debut season itself, by bringing home 14 tackle points of the 7 matches he played during the season. After his debut season, Vijin was retained by Bengal for the following season as well. However, his performance for PKL Season 3 was not on par with his previous season and hence was drafted on to Patna Pirates, who made the final bid for him during season 4 where he was largely used as a substitute or on the bench.

It was during his stint with the Tamil Thalaivas for seasons 5 and 6, we got to see Vijin back on his form. With C Arun as his support defender, the duo brought in several points for Thalaivas. He might not look the part of a cover defender who is predominantly bulky and hefty, but his dashes and support defending is a treat to watch.

Outside the mat, Vijin is a foodie who enjoys traveling and dancing.