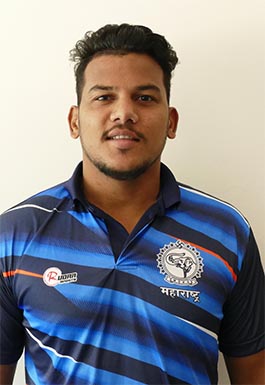 Girish Maruti Ernak is an Indian Kabaddi player who was born in Kalyan, Maharashtra on December 12, 1990 to a middle class family. One of the most promising finds in Indian Kabaddi, his talents were recognized by his PT teacher at a young age and it was he who encouraged him to participate in an Inter School Kabaddi tournament. The prodigy took wings and there was no turning back.

Girish Ernak is an example to many who wish to pursue Kabaddi as a sport and as a career. Epitome of hard work and dedication, he was clueless in the beginning of his career about the scope, expanse or necessities of Indian Kabaddi thanks to his humble background. This also meant that he was unable to meet the dietary requirements need for a sport like Kabaddi. However, he was not the one to lose hope and back down. He started spending his mornings waking at 4 and being a newspaper boy. He used this money for his expenses and trained hard to establish himself in the mat.

Girish started his Pro Kabaddi career with Patna Pirates in 2015 and had a stint with Bengal Warriors in Season 3 and 4. He formed a formidable partnership with Right corner Nilesh Shinde in Season 3 for Bengal Warriors. He had an average season 4 with Bengal warriors and Puneri Paltan saw the potential in him and bought him at the Season 5 auctions. He is currently a strong force to reckon with Puneri Paltan partnering with Sandeep Narwal and also captained them for Season 6. He stands at 5ft 7 inch tall and has cemented his credentials as the solid left corner defender and continues to maintain the amazing form in the national level as well.

Out of the 97 matches he played in Pro Kabaddi League, he has scored 256 points and has a whopping 92.53 not out percentage (till Season 7). He has got 14 super tackles and 16 High 5s. His tackle strike rate stands close to 47%, which is pretty good for a left corner defender. (Stats till Season 7). His sturdy and dominant performance in defense forced Puneri Paltan to retain Kabaddi Masters Dubai 2018. He showcased his versatility by playing left cover when his team needed an experienced person manning the covers.

Girish utilizes his signature ‘Dash’ movement to great effect and has led Puneri Paltan’s defense with 64 tackle points in a single season. He claimed five High 5’s in Season 5, the second-highest tally in the campaign. He was part of the Maharashtra team which won the 65th Senior Nationals in 2017 –2018. He was also part of the team which came third in the Third Federation cup in 2018.

He was given the nod ahead of the much-seasoned campaigner Surender Nada at the left corner, and he did not disappoint as he added two High 5’s to his tally in the course of the campaign and after crushing Pakistan and Kenya in the group stages, India continued the onslaught against Republic of Korea in the semi-finals and Iran in the finals to run away as the winners of the Kabaddi Masters Dubai 2018.

In his free time, he enjoys working out in the gym, swimming, and traveling. He is an embodiment of strength and commitment to the game and continues to be the warrior who would not back down in face of adversities and continues to sprint across the mat to push raiders out of bounds.