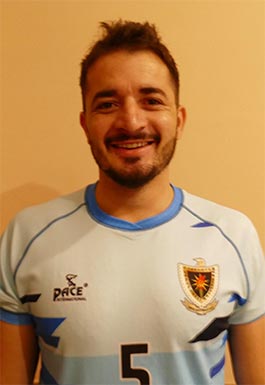 Parvesh Bhainswal is an Indian Kabaddi player who is a part of Gujarat Fortune Giants in the Pro Kabaddi. Born on 12th April 1997, Parvesh was brought up in the town of Bhainswal, which had a history of creating top-level sports persons.

His elder brothers represented their school Kabaddi team and inspired him to develop a strong passion for the sport right from his childhood. Parvesh was a teenager when he realised that he had the potential of continuing Kabaddi professionally in the future. Hence, he appeared in the U-14 nationals and also the school nationals. His coach, Bhupender Malik, was impressed by the way this young defender had been performing.

Parvesh caught the eye of Jaivir Sharma while playing at the University Nationals. Sharma, a coach at Sports Authority of India, Gandhinagar, got Prvesh admitted to the facility to nurture the game of the youngster.

After his heroics of winning two back to back titles at the university nationals got him a place in Jaipur Pink Panthers for Pro Kabaddi Season 4. However, it was a forgetful debut for young Parvesh as he scored only three points from seven outings in the season. He was let go after just one season with the team.

At Pro Kabaddi Season 5 Auctions, Parvesh was picked up by Gujarat Fortune Giants after their coach Manpreet Singh was impressed with the skill set of the player at a national level tournament. Parvesh's cousin, Sunil Kumar, was also picked up by the team and the duo were a part of the young team that was going to make its debut in the league. The stories of how the two defenders have been tackling raiders were already making the waves and it was time for them to shine on the stage of PKL.

Parvesh and Sunil played an important role in Gujarat's maiden run to the finals of the PKL in their debut season itself. Parvesh scored 48 tackle points from 24 matches and announced himself to the stage. Along with Sunil, Abozar Mighani, and Fazel Atrachali, the defense of Gujarat seemed to be in great hands. Parvesh was retained by the team for the next season as well.

In PKL Season 6, Parvesh notched up his game by a great level and went on to finish as the second-best defender of the league after Nitesh Kumar. He scored 86 points from 25 matches and was a crucial member of the team as they reached the finals for the second consecutive year. Parvesh's performance in Pro Kabaddi 2018 saw him become the highest-paid player of Gujarat Fortune Giants when he was bought by the team for Rs. 75 lakh. Using the Final Bid Match (FBM) card at the auctions, Gujarat ensured that their top defender remains with the team for the next season as well.

Parvesh lived up to the hopes as he once again was the highest scoring defender for the team. He scored 55 tackle points from 22 matches.