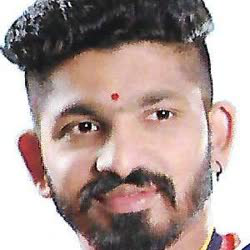 Ruturaj Shivaji Koravi was born on 1st April 1994 in Kolhapur district of Maharashtra.  His father was a renowned sports personnel and his mother being a National kabaddi player, kabaddi was in his blood. From his young age, he had a keen interest in wrestling and handball apart from kabaddi. Given his family background, Ruturaj’s parents were extremely supportive of his choices and often took him to local tournaments held in the nearest villages, so as to get good exposure in kabaddi.

Ruturaj began his career when he was selected to play for Mahindra & Mahindra team in Mumbai, where his performance was un-rivaled. From there, nothing curbed his growth in kabaddi. Ruturaj then represented Kolhapur in district level competitions and later he represented Maharashtra in the state-level competitions.

Ruturaj is an audacious kabaddi player with magnificent defending capability. Being a defender from the right corner his arsenal of skills include the infamous thigh hold and ankle holds. Off the kabaddi mat, he has a very friendly demeanor and is very fond of traveling.

He made his debut to VIVO Pro Kabaddi league in season 6, where he was bought by the Gujurat Fortunegiants at a price tag of Rs. 30.4 lakhs! This was due to his renowned performance in Senior nationals for Maharashtra where he took the team into finals. He showcased a brilliant performance in his debut season, where he managed to score 47 tackle points of the 23 matches he played and had a tackle strike rate of 39%. His potential was recognized by Manpreet Singh - Gujarat’s coach and was bought by the Giants in the 7th season as well owing to the trust of coach Manpreet Singh. He was used as a bit-part player in Season 7 mostly by Gujarat as they failed to qualify for the semifinals for the first time since their team was introduced in Season 5. He could only score 17 points and failed to affect the gameplay of Gujarat's opposition unlike Season 6.