Patna Pirates have won three out of their 4 PKL matches this season. 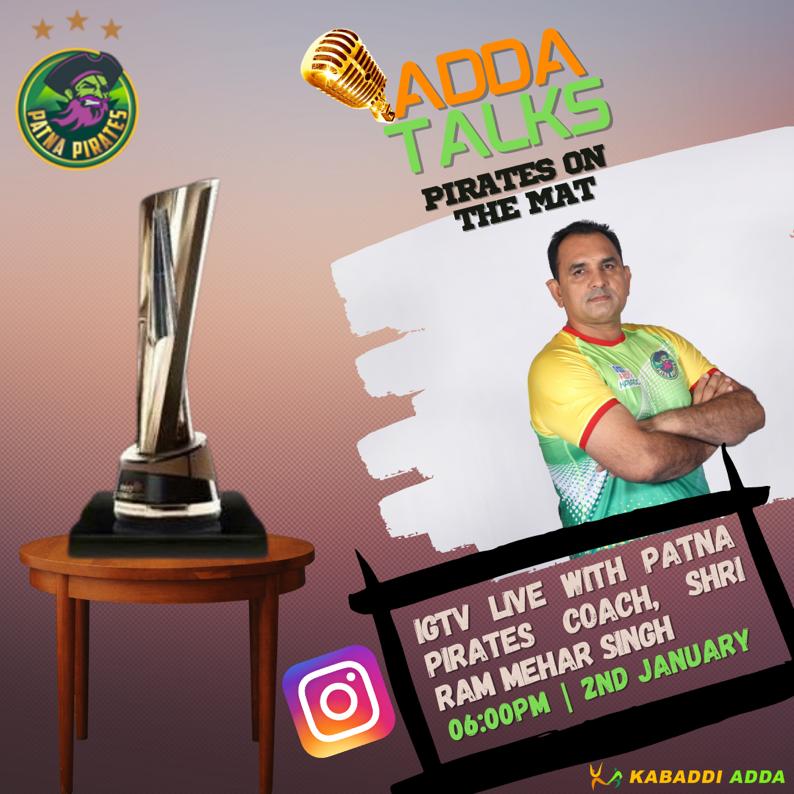 After their decision to not retain their talismanic raider, Pardeep Narwal, the spotlight was on Patna Pirates even before the start of  PKL 8. Coach Ram Meher Singh, who is the only coach to win more than one title in the history of the league talked about the Pirates strategy.

"Our focus was on the defence and we knew that if we had the coordination, we can have a balance between the attack and the defence. It's too early to say that we are doing well in the tournament but the start has been good," Ram Meher Singh said on Addatalks on Sunday.

Patna had planned for 'A', 'B', 'C' even before the players stepped on the mat but the coach said that the initial plan has worked well for '80-90% of the time'. Kabaddi Adda's Arvind Sivdas heaped praise on the Pirates who have won three out of the four matches so far.

"Mohammadreza Chiyaneh was scouted by the team and was impressive in the Kabaddi Masters in Dubai." The Arjuna awardee believed that language isn't a strong barrier for the Kabaddi players after they have trained with each other for a couple of weeks.

Patna Pirates have substituted their captain on a few occasions and the coach described this a tactical strategy while also explaining the thought process in appointing Prasanth Kumar Rai as the captain.

"Prasanth Kumar Rai has been playing the league since its inception and is a natural leader. He is educated and hence, he was given the leadership. We have a look at the body language after the team assembles and then the management decided the captain."

The skipper has been raiding frequently when the opposition has all the defenders on the mat and that is a part of the Pirates' plan. "We have a look in practice if he is doing well against 3 or 4 defenders or against 6-7 defenders. The category where he succeeds, we focus on that in the match," says the 2-time Asiad gold medal.

"The video analysts have been active ever since the inception of the league. It helps a lot as there are newer perspectives," when asked about the role of analytics in Kabaddi.

Sachin and Monu Goyat have been active in the defensive department so far. This has been a risky strategy as the raiders are off the mat and the coach believes that the corners and covers require support. The defence will be boosted if the raiders contribute as well and that in turn helps the raider's confidence too.

Ram Meher was the coach of services for 12 years and doubled up as the selector of the team. The coach has an eye on the tournament for all the months of the year and the scouting isn't really specific to the auction.

"These are early days in the tournament and we can only say with confidence that we have executed our plans well, only halfway into the tournament. But yes, we have started according to our plan."