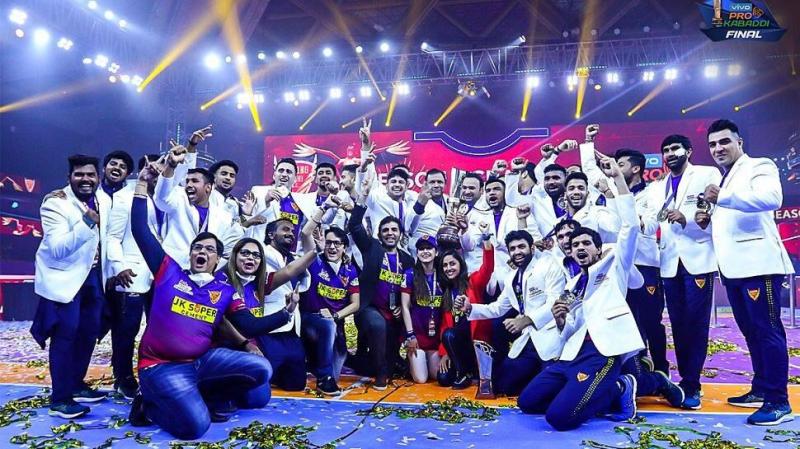 ‘Maybe not today, maybe not tomorrow, but I will be champion one day.’

This quote works perfectly for Dabang Delhi K.C’s season 8 journey. 3-time PKL champions Patna Pirates were defeated by Dabang Delhi K.C. with a breathtaking finish of the season finale. The final whistle ended with a score of 36 - 37, helping Delhi grab their first title. I believe each fan out there watched the game at the edge of their seats because everything was unexpected until the last moment. Joginder Narwal and Manjeet Chillar, both experienced players, finally had the chance to register a PKL title under their name. Naveen Kumar, the star whose express led to Delhi’s victory, bagged his first-ever title. Last but not the least, Delhi’s patience and Patna’s foolish mistakes resulted in Delhi’s victory.

The first half started with Naveen’s bonus and took its pace. Both teams proved to be neck to neck till the final whistle. Patna inflicted an all-out on Delhi in just 10 minutes. Their left raiders constantly tried to attack Delhi’s experienced defender Joginder Narwal by kicking him off the mat 3 times. On the other hand, Naveen targeted Patna’s defender Neeraj by showing him the way out thrice in the first half. He also managed to bag a whopping 200 raid point mark for the 8th season. The scoreboard read 17 - 15 with Patna leading the game. Both teams had equal points in their raiding and defence departments but Delhi, suffering from the all-out, gave Patna a 2 point boost.

The second half began with the biggest smiles from the fans as the 8th edition of PKL was coming to an end. Patna and Delhi had to showcase their A-game for the last 20 minutes. Patna constantly managed to save themselves from an all while Delhi searched for the mantra to do so. Vijay Malik, Delhi’s main raider in Naveen’s absence, registered his 5th super 10 and ended his season with 157 raid points overall. The final half ended with 36 - 37. This time Delhi had the upper card as they registered the all-out points in their team score. Naveen bagged his 12th super 10 and placed himself 4th in the Top Raiders list of the season. Both teams had 2 tackle points whereas Patna had 17 raid points to 15. The end was catastrophic as Patna’s main raiders were not seen on the mat helping lead to Delhi’s victory.

1. Naveen Kumar - Naveen’s express went all in, in today’s game. Delhi’s ray of hope shined bright on the mat by registering his 12th super 10. After his injury mid-tournament, his fans were worried about his performance but after yesterday's performance he said, ‘don’t worry I’m back.’

2. Dabang Delhi’s overall performance - Rumours said that Delhi had overplayed the Naveen card and that the team would not climb up the points table without him. Naveen suffered an injury mid-tournament and was pulled out of the team for 5 consecutive matches but that did not stop Delhi as they managed to win 5 matches out of 3 in his absence. Delhi’s team is filled with players such as Manjeet Chillar, Sandeep Narwal, and Joginder Narwal who stand as the pillars of defence. With their huge amount of experience, they controlled and ensured the smooth functioning of the team. Lastly, they outperformed this season with their balanced performance that placed them in the Top 3 teams throughout the season. Delhi ended the tournament with 12 wins, 6 losses, and 4 tie matches.

3. Patna Pirates coach - Patna Pirates remained almost undefeated in the second half of the PKL season 8 but their coach always seemed to be unsatisfied. With their outstanding performance, the Pirates were the first team to get the semi-final ticket. They lost to Delhi in their last meet as Patna’s coach introduced his team B on the mat. This became one of the reasons for Patna's downfall. Even though Patna won all its matches fair and square, their coach always portrayed that something was missing. This led to their downfall in the finals. Ram Mehar Singh is considered to be one of the legends in the Kabaddi world which raised the question, ‘ How could it go wrong?’ In yesterday’s game, he exhausted the substitutions of his team early enough. This impacted the team heavily as their main raiders PK Rai, Guman Singh, and Sachin was not seen on the mat in the final minutes of the game. Mohammad Reza, the league’s number 1 defender was seen to raid in the last few minutes. Hence the final had a catastrophic end leading to Delhi’s victory. I strongly believe that the picture would have been different if Patna’s raiders were on the mat.