Jaipur Pink Panthers kept their hopes of going into the playoffs by defeating Bengaluru Bulls 41-34 is. Deepak Hooda was not playing for Jaipur in this match, but the second Deepak i.e. Deepak Narwal did well, scoring 16 red points with Super-10 while Vishal completed the high five. Pawan Sehrawat once again scored 14 red points from Bangalore but could not win his team.

As the rains were raining in Panchkula in the first half, it took 5 super raids to combine both teams in one half. While from Bangalore, Pawan Sehrawat completed another Super-10, Deepak Narwal from Jaipur was also in great color and he also completed his Super-10 before half time. Sometimes Jaipur ahead and Bengaluru ahead, the same continued throughout the half-time statistics which also testified till the end of the first half, Jaipur was ahead from 20-18 but Bengaluru was not behind in the match.

The picture in the second half was the same as in the first half, as no one team seemed to be dominating. Sometimes Jaipur would get an edge and sometimes Bengaluru was leading in the match, the result was that by the 36th minute the score was equal to 31-31. That is, the match could still go in favor of any team, Pawan had hope for Bengaluru, so Deepak Narwal had the responsibility to keep the lamp of Jaipur lit. Jaipur got a one-point lead in the 39th minute over Bengaluru, where the fight was about to stop where each raid was adding to the thrill. But after this, Vishal completed his high five and gave Jaipur a 3 point lead and now Bangalore was all out as the victory was decided from Jaipur, as soon as the Whistle Pink Panthers won the match by 7 points.

This is the seventh win in 13 matches and the first win this season of the Jaipur Pink Panthers in Bengaluru Vivo Pro Kabaddi history. Jaipur Pink Panthers are now at number-7 with a win of 57 points, which means that the battle for the last place of the play-offs has now turned to Jaipur vs UP. Bengaluru have already reached the playoffs, so they have not been affected by the defeat.

On Saturday, October 5, UP Yoddha's home leg will begin, which will be played at the Shaheed Vijay Singh Pathik Sports Complex in Greater Noida. On the first day, two matches will be played where UP Warrior and Dabang Delhi will compete in the first match and in the second match Gujarat Fortunegiants will face Patna Pirates.

Last encounter: Jaipur Pink Panthers and Bengaluru Bulls: Bulls back to their best to topple Panthers | 30-41

Match Preview: Jaipur Pink Panthers faces Pawan Sehrawat and hope to win the match to be in the playoffs race

This is one of the biggest matches of the remaining league stage matches. Jaipur needs to win both remaining games and hopes that Yoddhas lose all their home game matches. Bulls are coming off a record creating performance in their previous match against the Steelers which assured them of qualification to the playoffs. Will Pawan be motivated to put in another solo match-winning performance? The Panthers are coming off a spanking against the Titans and need to lift themselves for today. They can look back at the last time these teams clashed and heave a sigh of relief that Rohit Kumar isn't playing. If they can stop Pawan again the win can be theirs. 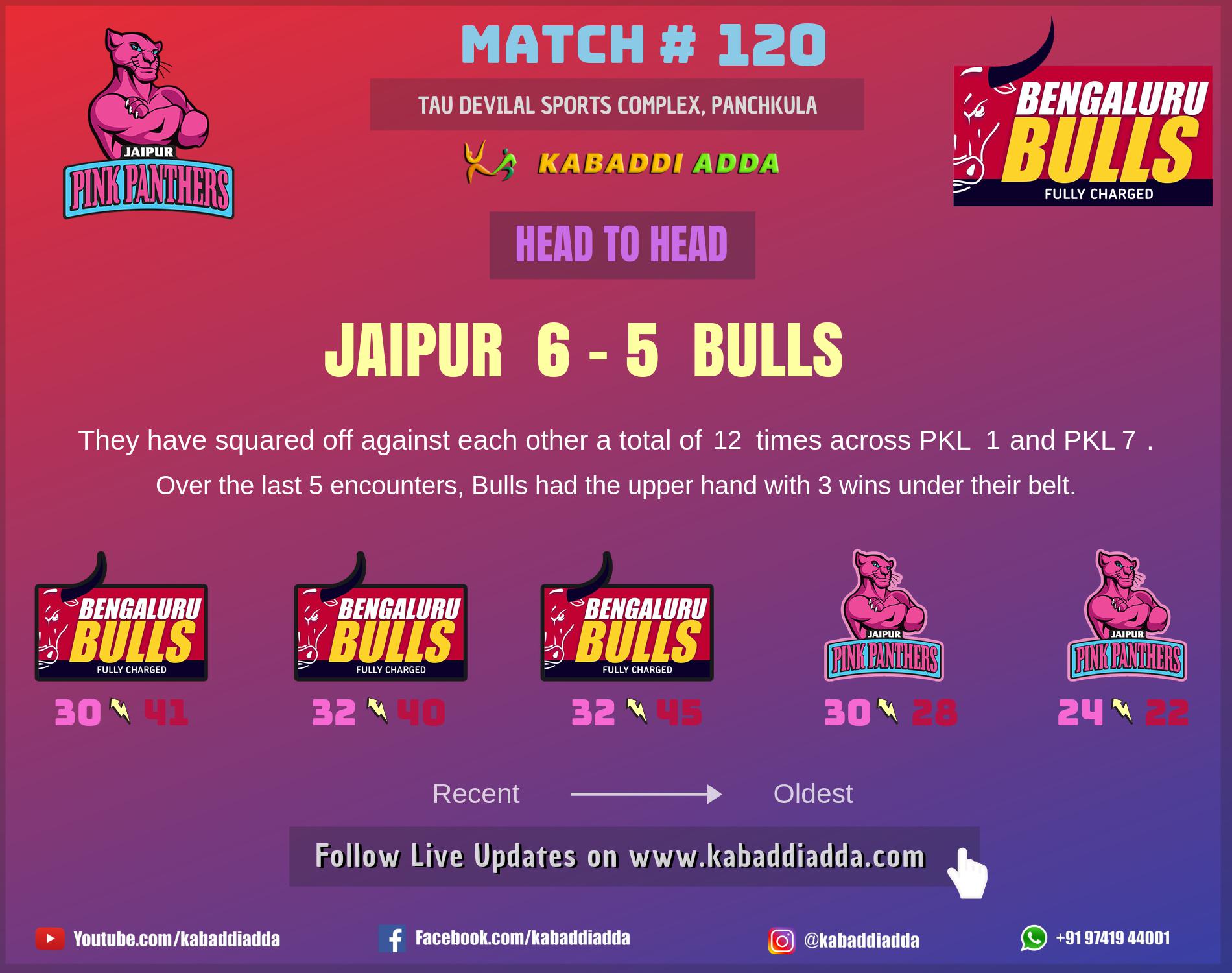