About Coach Shri. Ram Mehar Singh: He won the Arjuna Award for his heroics in the Asian Games - 1998 and 2002, where he helped India win two gold medals. He began his coaching career with the Indian Air Force team and Services Kabaddi team back in 2004 and from then on he has been one of the most successful Kabaddi coaches in the country. He is the only coach in the Pro Kabaddi League history to win the PKL title more than once. 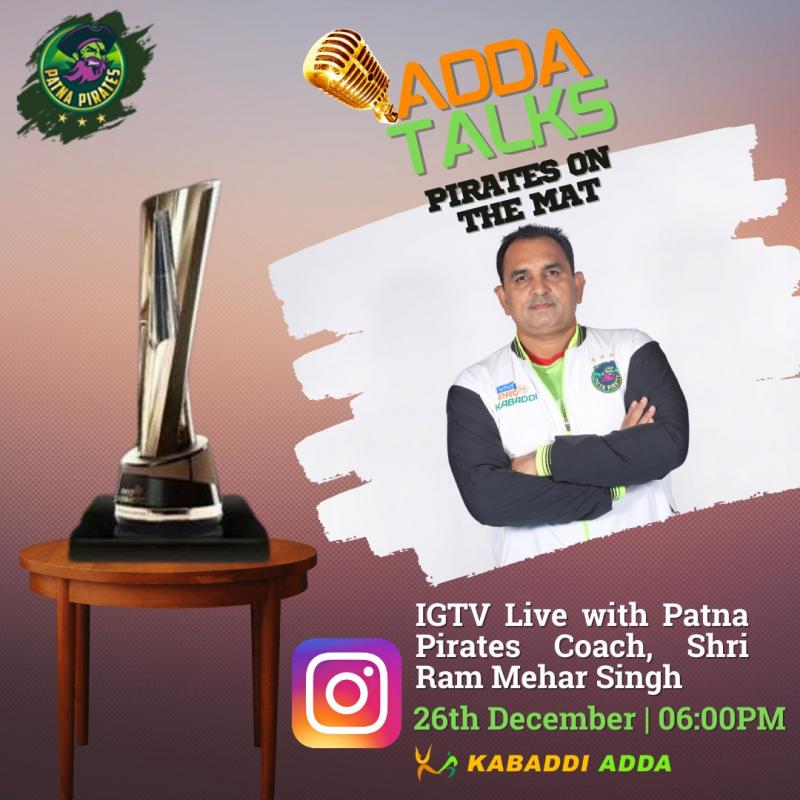 Patna Pirates won their first match against Haryana Steelers and lost to UP Yoddhas in the dying seconds of their 2nd match. After 5 seasons with Pardeep Narwal at the helm. Patna guided by Ram Mehar Singh has gone with a different strategy this season.

Q: Your defense is looking strong and confident this season; how did you enable them?
A: It is similar to what the Season 5 strategy was. The season when we won PKL. Well, I think it is too early to make a statement that our defense is strong. Only once we have played enough matches will we know.

Q: Instead of spending a lot on one raider this time, you have spent on multiple raiders.
A: We kept everyone's wishes in mind - the players, teams and thought it was better to plan strategically no how to divide our resources. Sajin hails from Kanyakumari, played a central defensive role in the Nationals for Tamil Nadu in 2019, and we thought he will do well this season. If we give such boys the opportunity, they will thrive.

Q: We see a difference already - in the overall game. Monu Goyat, Sachin, Prashant Rai are all delivering when it matters. How did you achieve this?
A: When the coaching camp starts - the entire team, right from support staff, doctor, coach everyone works hard. There is no shortcut in life is what I believe. I do not know if that is a strength or a weakness. If you work hard you will succeed. That is my training philosophy. If a player has good fitness levels, then polishing the technique is possible however if the fitness (strength, endurance, stamina) level itself is low then the technique gets shadowed.

Q: Prashanth Kumar Rai - what qualities do you see in him as a captain?
A: Captain's role is to keep the team together and be cool-minded. He is a senior player and has played all seasons so far. He keeps the team together, which is very important.

Q: Which tournaments do you scout young players from?
A: All of the All India tournaments have people from all districts, you will always find players there. Sajin was one such find. We followed his match closely. He has the caliber to make it big.

Q: Surender Gill - what he did in the last minute of the match against Patna was incredible?
A: His presence of mind is great. And that helped him do what he did at that last minute.

Q: Talking of young players - all 12 teams have played once already. We have seen so many young players play. What is the message you would like to give them?
About 20 players have come into PKL through K7 Kabaddi. The opportunity given to these young players is incredible! Like K7 Kabaddi we should have 2 to 3 more tournaments before the league starts. It gives young players the chance to showcase themselves. Jaideep from Haryana Steelers, Mohit Goyat from Puneri Paltan, all K7 Kabaddi finds are performing very well. Such platforms will help players grow and I give the credit to the K7 tournament.

I want kabaddi to grow and, it needs like-minded people. Not all players will get to play in the PKL. But tournaments like K7 Kabaddi and a few more will give us the chance to see and take decisions to scout players. I wish you all the best to grow the sport and give young players wings.