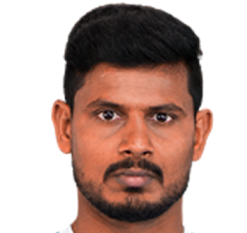 Prasanth Kumar Rai is an Indian professional Kabaddi player born on 4th April 1984 in Mangalore, Karnataka. Prasanth made his debut as a raider in Pro Kabaddi Season 1.

He played for Telugu Titans in the first 3 seasons of Pro Kabaddi where he played as a backup for poster boy Rahul Chaudhary and Sukesh Hegde and was relatively successful. In PKL season 4, he was a part of Dabang Delhi, where he couldn't emulate much success as the team combination was weak. In the 5th season, he was part of the Haryana Steelers and played a crucial role in getting them to the playoffs.

For the 7th Season, he was bought by Haryana Steelers. He is really aggressive on the field and has improved his performance every season. He had scored 54 points in 15 games for Telugu Titans in season 2. UP Yoddha spent Rs. 79 Lakhs on Prasanth for season 6, which was the highest price any team has ever quoted for him during his PKL career and the highest for a category B player in Season 6 auctions. Many teams were impressed by his performances at the Federation Cup and during the national camp which helped increase his price. His best performance was in PKL Season 6 when he was with UP Yoddha, where he managed to score 147 points in 21 matches, it was in this season that he crossed the 100 raid points in a season milestone.

Prasanth Kumar Rai is a consistent player and is well known for his move the 'Running Hand Touch'. He is one of the most experienced players in PKL playing for different teams and one of the very few players to have played all seasons till now.

Prasanth is a foodie, enjoys gaming and is a workout freak. He is fondly called ‘Pacchi’ by his teammates and close friends.