3 time champions Patna Pirates have begun the season with a bang. "We have been a cohesive unit - both offence and defence have worked in tandem so far." They sit comfortably at the 3rd position on the table with 4 matches unbeaten.

In an exclusive conversation with Deputy Coach of Patna Pirates - Mr. MV Sundaram shed light on the mood in the camp after the recent two matches; his relationship with coach Shri. Ram Meher Singh and how he maintains discipline in the team. 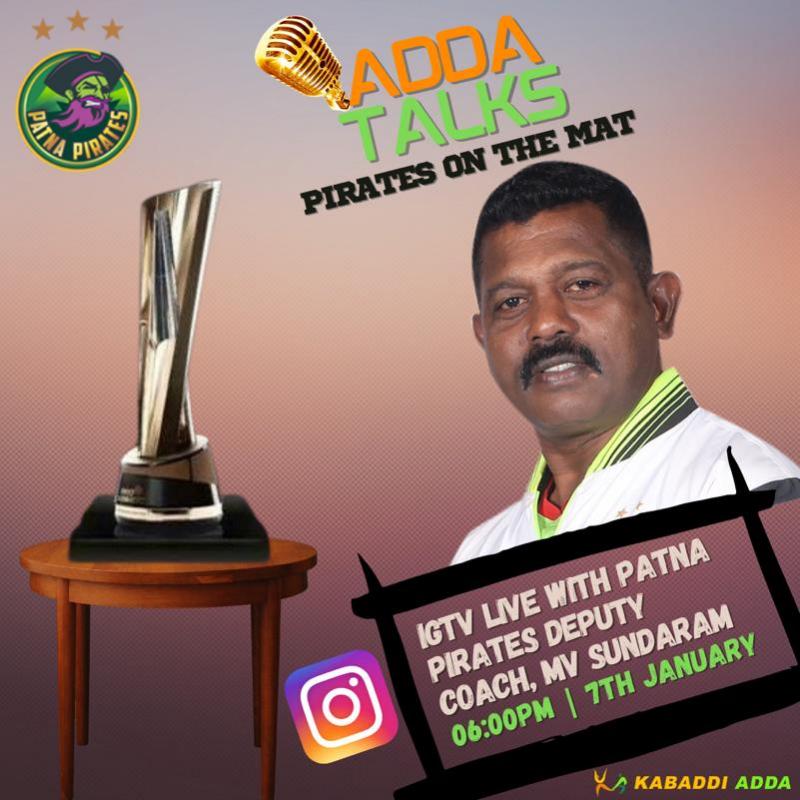 Q: Since our last conversation with Coach Ram Meher Singh two closely contested battles have taken place. Patna has come up on top with a win and draw. How's the mood in the camp?

"The mood in the dressing room is positive. Every team goes into the match with the thought of winning. From the coach, players to every staff member they all prepare to the T. The one who remains cool and calm under pressure takes the right decisions on the mat and wins."

Q: How old is the duo of Ram Meher Singh and MV Sundaram? What bought you guys together?

"I have worked in the army for more than 30 years and Ram used to be in the Air Force - since 1996. I used to play for the Army and, he used to play for the Air Force. While we played for services together, we used to clash a lot on the fields during these tournaments. We have been friends since then. He approached me while I was the chief coach of Army and, he was the chief coach of the Air Force team. He requested me to come along with him, to coach on the same team and, this is how I came on to this platform."

As you talked about your chemistry with Ram Sir who is from Haryana and you from Madras, we have seen teams nowadays having players from different states and countries and yet gelling up pretty quickly? How?

"We have players from different countries and states - Iran, UP, Haryana, Karnataka, Tamil Nadu and, so on. When we go and scout players we, don't restrict ourselves with selecting players from only one state. Our scouts and video analysts go out there to search for the best talent available. Whether it is from the local or the national tournaments we go wherever possible."

Q: What is your working mechanism? How do you both work together?

"We are both flexible when it comes to coaching and giving out advice. During the matches when he goes out to look after the raiding side I go out and talk to the defensive unit. When he comes to the defensive side, I go towards the raiding side and motivate them. We even divide our team during practice sessions. His team vs my team, let's see who wins. It keeps a healthy competition among the players as well."

Q: How do you manage to incorporate the discipline factor in these players?

"Like I said me and Coach Ram, both are from Army and Air Force backgrounds, discipline is in our blood. Anybody who aims to be a professional athlete needs to have discipline. Players from different states and backgrounds come to us. The only way to bring them together is through discipline. Over time you can see the results through it."

Q: This season's biggest question was how will Patna cope without their star Pardeep?  What was your plan for this season?

"Pardeep was the apple of our eye. We wish him luck wherever he goes. But at the end of the day, this is a competition and, the show must go on."

Q: Monu Goyat coming back to Pirates, how was this beneficial?

"All the players who have been with us know we treasure two things the most- one is discipline and the other is team work which Monu knew inside out and him coming back was an easier transition for the team."

Q: You have the most in-form raiding trio. What are your thoughts on having multiple raiders in the team?

"Every player has different strengths and weaknesses and, that is the beauty of it. All three players we have are agile and have brute strength on the mat. We treat them as equals and tell them to lead the team, whoever is feeling good at the moment."

Q: Pirate's defence has been top of the line this season. The covers and corners have been excellent. How did you pick this defence when going into auction?

"We picked players by scouting them extensively. Mohammadreza Shadloui Chiyaneh got picked for his impressive outing in the Kabaddi Masters in Dubai. Sajin played well in Jaisalmer, Sunil has played well for the Haryana outfit past 3 years. We already had Neeraj and we retained him. We thought these 4 would be best suited to each other, so we bought them together. Raiding was always our strong suit hence, we focused more on defence this time and, we have seen the fruits of it so far. "

Q: Patna has been great so far. But, last two matches we saw a few errors that would have cost you the game. How do you motivate your player back from this?

"We always tell them mistakes are part and parcel of the game. There are many games left to play, don't get your morale down. You are the best in your position. Now go and prove them in the next game why that is."

Few raiders are monstrous out there in the league like Naveen and Pawan who are high-scoring raiders. How does the team plan to play against these category of players?

"As you said, these players are agile and technical and are difficult to defend. But we always tell them don't try to match them only with speed, use your brains with your agility and play according to your strengths."

We ended our interview with a little Fun Session where we asked him quick rapid-fire questions.

1 - Who has won more Intra matches? Is it you or Ram sir?

Well I don't remember the exact number but he has won more matches. He has some secrets that he tells his team and they win by that.

2 - How crucial is time out according to the coach?

The intervention of the coach by using time-outs is important. How to play when you are leading and when you are chasing are completely different. What you see from outside as fans and then comment - they should have played like this and that. But the reality on the mat and the pressure is completely different. And that's when the coach needs to come and advise them on what is the best he can do.

3- Pardeep vs Monu, Prashanth, And Sachin. Who will you rate more?

Pardeep will remain in our hearts but, out in the match, I will rate my fantastic trio more.

Fazel has been a great player so far but we haven't coached him but he is a proven player. Shadloui Chiyaneh is new raw talent with the willpower to prove. So I will pick him.

Both are services players but Sunil is on my team so I will pick him.

6 - The current Bio bubble format with no home legs or the old format with 5 home games, which one do you prefer?

In Bubble, we get some break in between that gives the player the recovery time they need. While in the old format you had to play regular games for 5 days straight without any breaks. It took a toll on the players. So I prefer the bio bubble one.

We concluded with a message for upcoming young generations and fans from MV Sundaram "Kindly support our team for the upcoming matches. And to all the youngsters always work hard and believe in yourself. Play hard and rest well. Who knows some day you will be a Patna Pirate player too."