Contrary to the general strategy that Patna used to apply for its previous seasons, the team management decided to go for some lesser known faces and budding players in the auction. Read on for more information.

In comparison to the previous season, wherein the team was only solemnly dependent on their star raider Pardeep Narwal to deliver the majority of raid points, the team managed to form a solid unit of raiders in the squad. The quartet of Sachin Tanwar, Prashant Kumar Rai, Monu Goyat and Guman Singh have been quite successful for the Pirates this time around, also proving that having multiple options at your disposal can also do wonders for the team.

A fixed role has been assigned to each of the raiders. Sachin Tanwar has been assigned with the responsibility of being the strike raider for the team and has scored around 7.45 raid points per game. Monu Goyat brings in the needed balance to the raiding department and while the player has played less number of games, Monu has managed to score at an average of 5.77 raid points per game. Captain Prashant Kumar Rai brings in stability to the unit, contributing around 4.5 raid points per game. This has also ensured the team possesses the variety to have a skilful bunch of players available to raid from both left and right side.

For a team to be successful and to win titles, it is essential that it consists of a strong defensive unit. And Patna Pirates have managed to create a strong unit by making some new and young additions this time. While both MohammedReza Shadloui Chiyaneh and Chandrashekhar Sajin are playing their maiden season of Pro Kabaddi League, Neeraj and Sunil Kumar have been a part of the league.

Though it’s not a unit having any established players, the unit has played their respective roles really well so far. The addition of the Iranian defender has brought in additional strength to the team, with his ability to execute multiple skills playing at the left corner, also playing as a complete all-rounder. Shadloui has scored 3.39 tackle points per game for the team. Neeraj has done a commendable job in terms of heading the unit really well, scoring 2.61 tackle points per game for the Pirates. Patna has benefitted big time by the virtue of its strong defence this season. 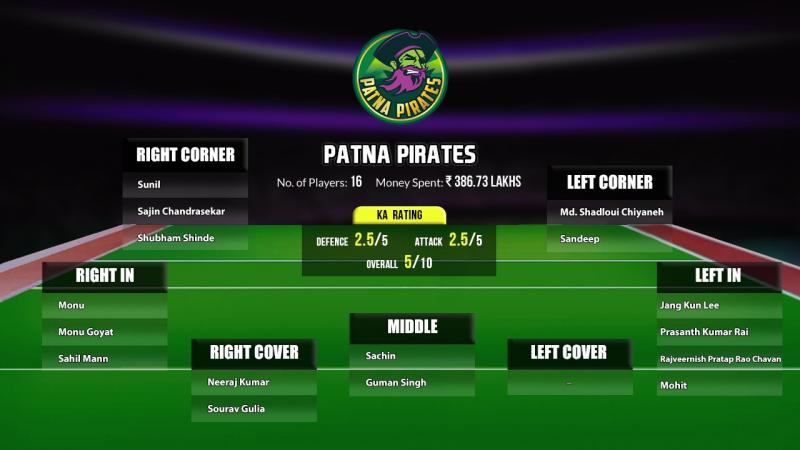 The stats do justify how Patna has been able to dominate this season. The unit till now has managed 290 successful raids, scoring 366 raid points. On the defensive front, the team had a total of 200 successful tackles, scoring 214 tackle points, averaging at around 12 tackle points per game. Patna's defence currently stands at no. 1 with 45% successful tackles. In addition to this, Patna has inflicted the most number of all-outs (30) and also has gone through the least number of all-outs (14). The team has scored an average of 37.5 points per game.

All these factors indicate the dominance Patna has been able to achieve this season, with the help of a solid unit in both raiding and defensive department. Ram Mehar Singh has done a wonderful job in not only bringing together a great unit, but also extracting some great performances from the players. The coach has utilised players really well and rightfully deserves credit for rebuilding the team. Patna Pirates have already qualified for the playoffs for this season, winning 7 consecutive games, and would be aiming at winning the league for the 4th time.