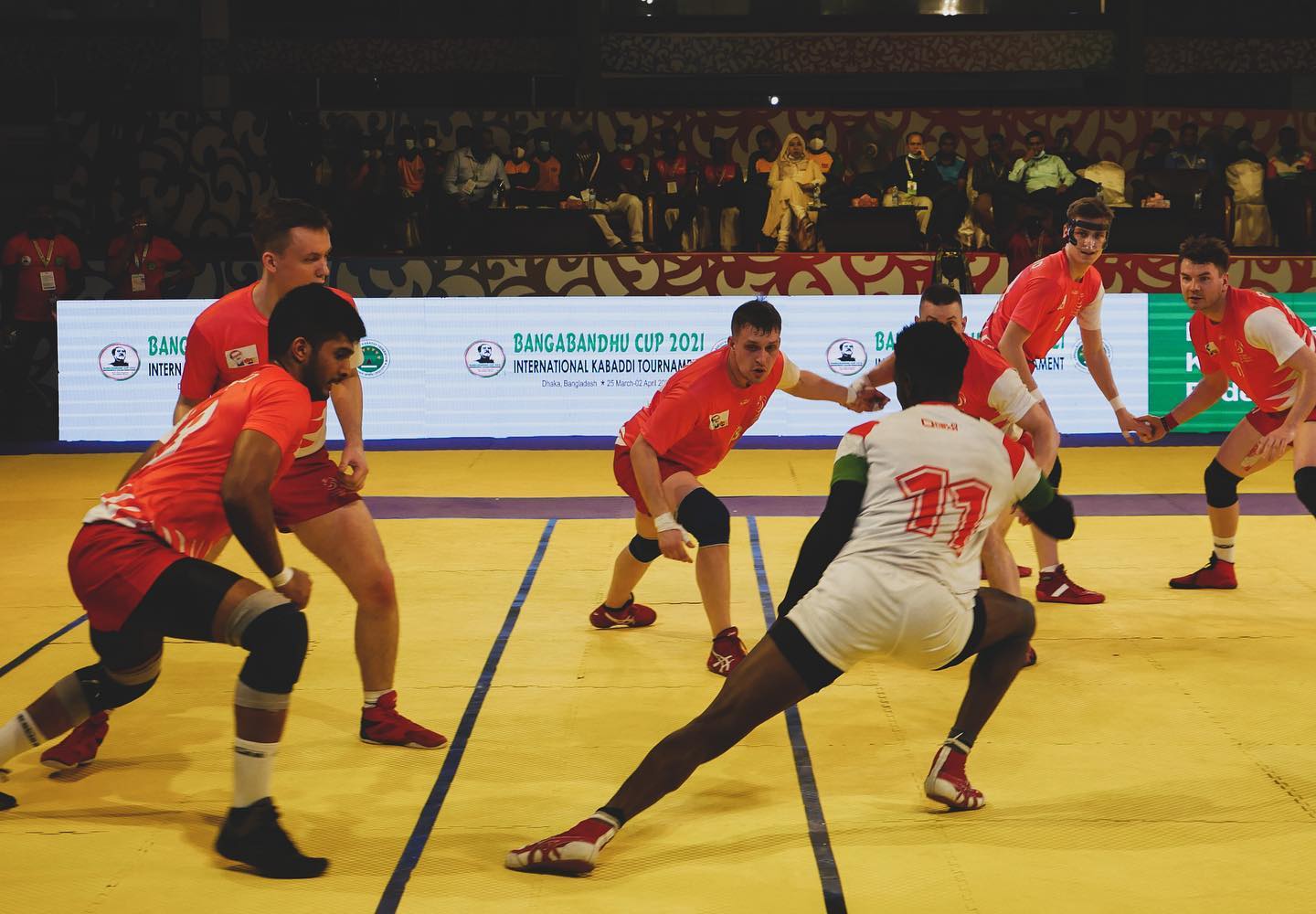 Bangabandhu Cup International Kabaddi tournament is underway in Shahid Noor Hossain National Volleyball Stadium, Dhaka. The Day 5 of the tournament had the final league match where Sri Lanka took on  Nepal which turned out to be the virtual Quarter Final. Later in the day the Qualifier was played between Sri Lanka and Kenya to decide who would face the hosts Bangladesh in the final of Bangabandhu Cup 2021.

The first match of Day 5 happened in the morning session where Sri lanka went head on against Nepal in the last league match of Bangabandhu Cup 2021. Sri Lanka had an upper hand in the game as they just had to tie or win the match to qualify but Nepal had to win convincingly to make it to the qualifiers to face Kenya. The match went ahead with Nepal going ahead with the lead but Sri Lanka always made sure to catch the lead in the next few raids. This kept happening and at one point in the match, Sri Lanka inflicted an all-out and went ahead in the half. At the end of first half the scores read 22-13 in favor of Sri Lanka. The 2nd half began with Sri Lanka on the attack and they kept taking points but Nepal did not give up as they slowly started getting closer to that score of Sri Lanka. The score difference was just six points in the 2nd half. But Sri Lanka made sure Nepal were pushed to another all-out where the game was almost over for Nepal. Sri lanka went on to win the game with scores of 45-28 and made it to the Qualifiers of Bangabandhu Cup 2021.

The Final match of day 5 was the qualifiers between Sri Lanka and Kenya, and this match was one of the anticipated games as both teams looked good through out the tournament. The last time these two teams faced off against each other in the league stages, Sri Lanka got over the line by just two points. The All important match began on a neck to neck note as both teams were at it from the word go. But it was Sri lanka who drew first blood in the form of an all-out on Kenya to take lead in the match with scores of 12-5 in favor of Sri lanka. Then the game shifted towards Kenya as they were back in the game by doing multi-point raids and by the end of first half Kenya went ahead with one point lead and Sri lanka on the verge of an all-out with just 1 player left in the mat- Half time score- 17-16 in favor of Kenya. The 2nd half of the qualifier began with Sri Lanka getting all-out and Kenya on the lead in the game. Sri Lanka were very quick to equalize from there as they got the score to 20 a piece in just 3 raids in the match. The game went ahead with equal scores for quite sometime as the scores read 30-30 and referee announced last 4 minutes of play. Sri Lanka pulled off an all-out on Kenya and went ahead in the game with a 5 point lead in the dying minutes of the match. After which Kenya pulled off something spectacular, in the final 3 minutes of the game Kenya managed to score 7 points and give away just 1 to win the game in style. The last raid of match saw Kenya go into raid with 1 point deficit and the raider came back with two points and the final whistle blew and the celebrations began in the Kenyan camp as they jumped in joy.

Day 5 of the Bangabandhu Cup saw the most interesting match yet in the tournament where Kenya went past Sri Lanka by a whisker, what a tournament it has been for Kenya, they started off the tournament with two close games where they ended up on the wrong side but after that they came back into the tournament with two wins and then this performance in the qualifiers. We are in for cracker of a contest in the finals as confident Kenya will take on the hosts Bangladesh who yet to be beaten in the Bangabandhu Cup 2021. Do not miss the contest- 7pm Live on T-sports Youtube channel and updates on Kabaddi Adda.