Bengaluru Bulls and Dabang Delhi played out a thrilling 39-39 tie at the Sawai Mansingh Stadium on Monday. Delhi were in the lead for most parts of the match but a late comeback by the Bulls, courtesy Pawan Kumar Sehrawat saw both sides settle for a tie from the encounter.

Pawan Sehrawat pulls the match in last minute, settled with Naveen in a tie

The defenses of both the teams looked ready for the challenge posed by best raiders in the league, as they traded blows in the initial minutes. The 19-year-old Naveen Kumar secured eight raid points to clinch an All-Out to give Delhi side a four-point lead. Rohit Kumar's absence due to an injury played a key role in Bulls relatively poor performance in the raiding department, still, the Bulls made a comeback when three Delhi defenders were adjudged out of bounds with under three minutes to half time. The first half ended 22-20 with Delhi on top.

Naveen continued to impress in the second half, securing his Super 10 as Delhi inflicted another All-Out on the Bulls in the 9th minute of the second half to move to a 10-point lead. Bulls standby captain Pawan Sehrawat upped his game and quickly secured an All-Out for the defending champions with under seven minutes left to make it a two-point game. Both Naveen Kumar and Pawan Sehrawat were sent to the bench with less than three minutes left in the match with the scores tied at 36-36. But Delhi sniffed a victory after a tackle and raid point had given them a two-point cushion going into the last minute.

A careless tackle by Vishal Mane, followed by Naveen's failure to cross the white line to complete a legal raid, helped Bulls clinch an unlikely tie from the encounter. Despite the tie, Delhi remained on top of the table.

Table-toppers Dabang Delhi will head into the match as the favorites as they take on the defending champs, who are placed in the top half of the table. This game will see the top raiders of the season clash. Top raider Naveen Kumar of Delhi has been aptly supported by Ravinder Pahal, who has held up the Delhi defense, garnering a total of 44 tackle points. Another performer for the Delhi team has been all-rounder Vijay with a total of 33 points. The defenders will have their task cut out as the league's top raider, Pawan Kumar Sehrawat will be in the opposition rank. 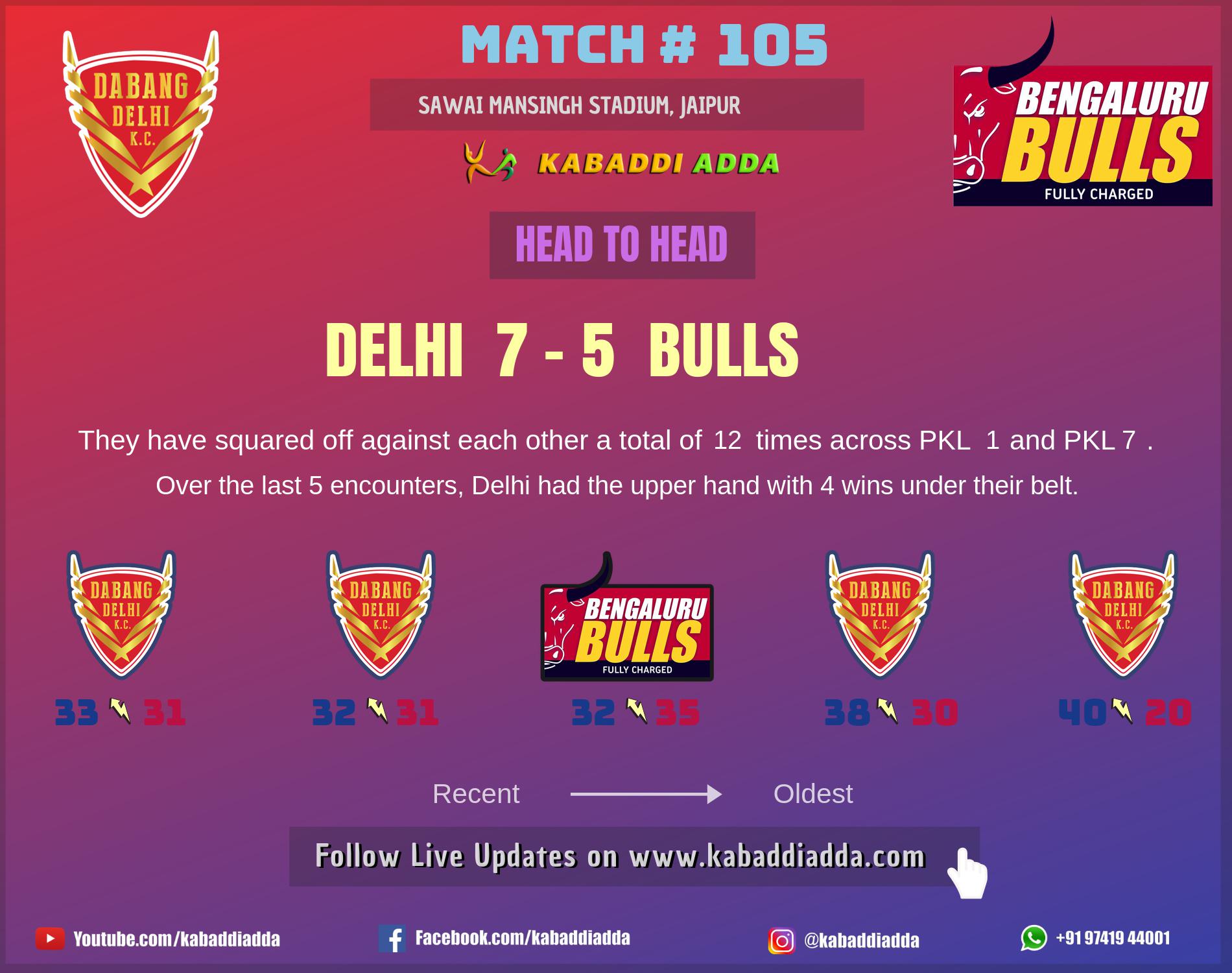