Ajith Kumar scored a Super 10 for the Tamil Thalaivas as the team secured a victory after a long winless streak, in the penultimate match of their campaign. Jaipur, despite having had a good start to the match succumbed to yet another defeat to end their campaign on a sad note. The Season One champions were actually the table-toppers at one point time and the management will be keen to identify what went wrong for the Pink Panthers in the second half of the season.

There was nothing but pride at stake in the match as both the teams had failed to qualify for the playoff stages despite pre-season billing as favourites to reach the top six. While the Thalaivas went through an implosion, with the star players not finding the required cohesion to carry a team, Pink Panthers’ over-reliance on a Deepak Hooda backfired after the seasoned raider had a dip in form due to an illness. Jaipur started the match on the front foot, cheered by their owner Abhishek Bachchan from the stands, and nearly clinched an All-Out in the first ten minutes. But a much-changed Thalaivas had other plans and a Super Tackle on Deepal Narwal by Sagar in the 13th minute inspired a come-back. Ajith Kumar, perhaps the only happy story in Thalaivas’ campaign this season, was at his usual best and the raider’s dominance yielded an All-Out for the Tamil side with under two minutes of play remaining to half time. The half ended with Thalaivas leading 19-14.

Jaipur Pink Panthers got back into the match after the half-time break with their defenders cutting down on easy opportunities for opposition raiders. Amit Hooda was particularly impressive in the left corner for the Pink Panthers, picking up a high 5, as the season one champions reduced Thalaivas’ lead to two points. Both teams traded blows in an evenly-matched mid-section of the second half with both teams failing to convert their momentum into an All-Out. Thalaivas were sitting on a 5-point lead when Jaipur’s Guman Singh produced a 3-point raid to make the scores 31-33 with under 2 minutes remaining. A successful Super Tackle on Ajith Kumar by the Pink Panthers made it an interesting last minute but the Thalaivas’ defense held firm to clinch a victory.

Both the teams are playing for pride, win or loss their won't be any change in position on the points table. Jaipur rested Deepak Hooda. Is it an indication of whom they will retain and whom they will release. Will it be Deepak Niwas Hooda vs Rahul Chaudhari or will that contest be a damp squib. Will Ajay Thakur finally come mat? 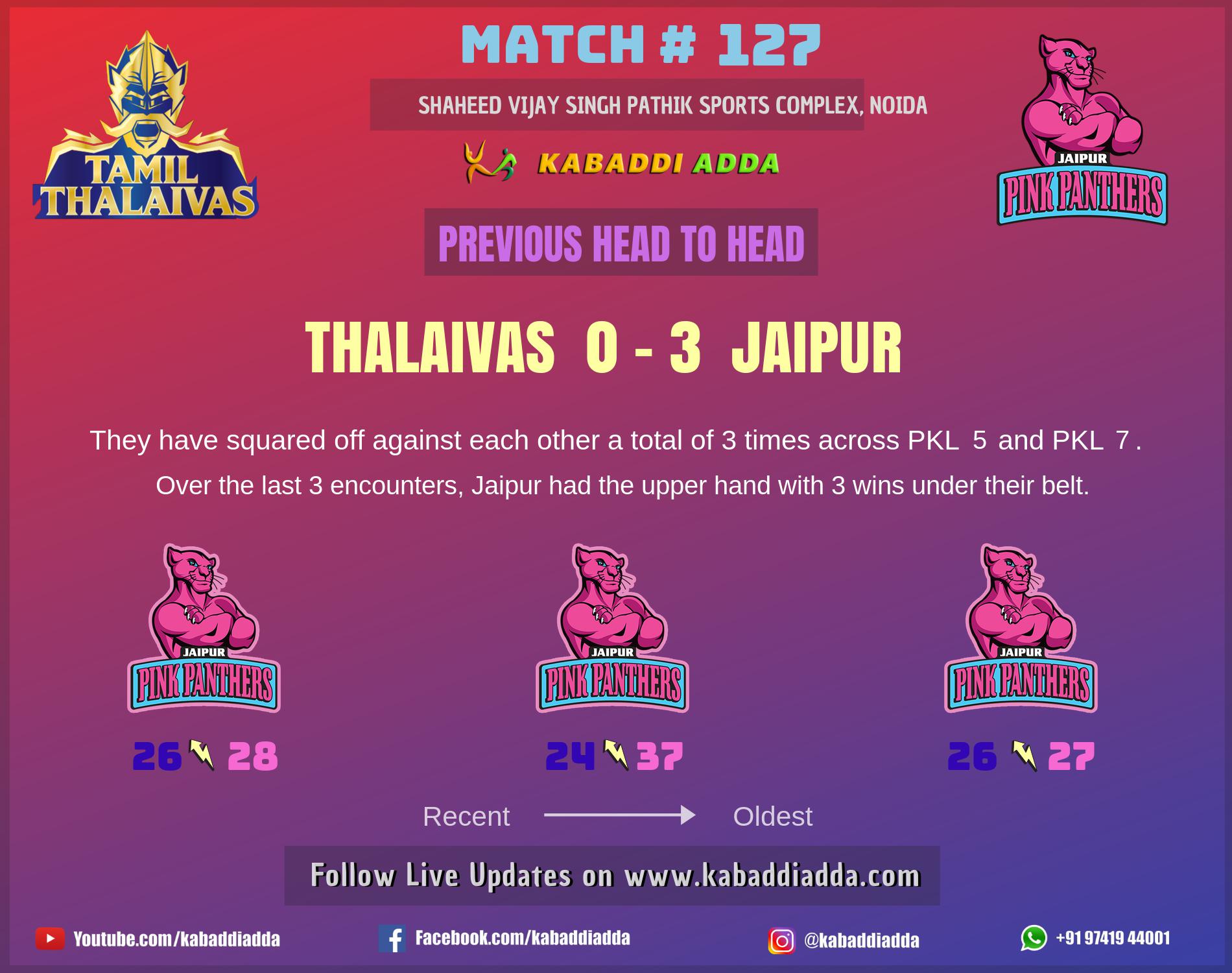