Telugu Titans won the match with the score of 24-21 against table topper Jaipur Pink Panthers. The match was a fairy tale of super tackles with a total of eight. Jaipur claimed five and Titans with three super tackles made it an exciting encounter. There were in total 45 points scored in the match out of which 29 points were scored in tackles making it a nightmare of a day for raiders.

The first half of the match witnessed a parade of super tackles by the Jaipur Pink Panthers. Veteran defender Amit Hooda was replaced by Santhapanaselvam in the right corner, who covered up well with two successful tackles to start with. Top raiders from both teams struggled for points with defense dominating the proceedings. Jaipur Pink Panthers claimed four consecutive super tackles in the first half which gave them a cushioning lead of 3 points going into the second half.

Star raiders in the form of Siddharth Desai and Deepak Niwas Hooda could manage only three and one raid points respectively.

The second half continued the flurry of super tackles, this time lead by the Titans. Eight tackle points for Vishal Bharadwaj ensured the Telugu Titans equal Jaipur Pink Panthers with halfway to go in the match. Abozar Mighani with another super tackle shifted the momentum in favor of the Titans which continued till the last raid of the match.

The last raid of the match was a close one with a super tackle opportunity for the Pink Panthers and a Do or Die raid for Telugu Titans with both teams separated by two points. Farhad Milaghardan just managed to go past the mid-line and defeat Jaipur with a margin of 3 points. Telugu Titans moved up from the bottom of the points table after defeating table-topper Jaipur Pink Panthers 24-21 in an edge of the seat thriller.

Match 57 promises to be a thrilling encounter as Jaipur Pink Panthers have won three of their last four matches while Telugu Titans are coming off a big win against the Haryana Steelers. Corner duo of Abozar Mohajermighani and Vishal Bhardwaj will be up against Deepak Hooda and Nilesh Salunkhe. Also the Bahubali Siddharth Desai will face Sandeep Dhull and Vishal, star defenders for Jaipur. 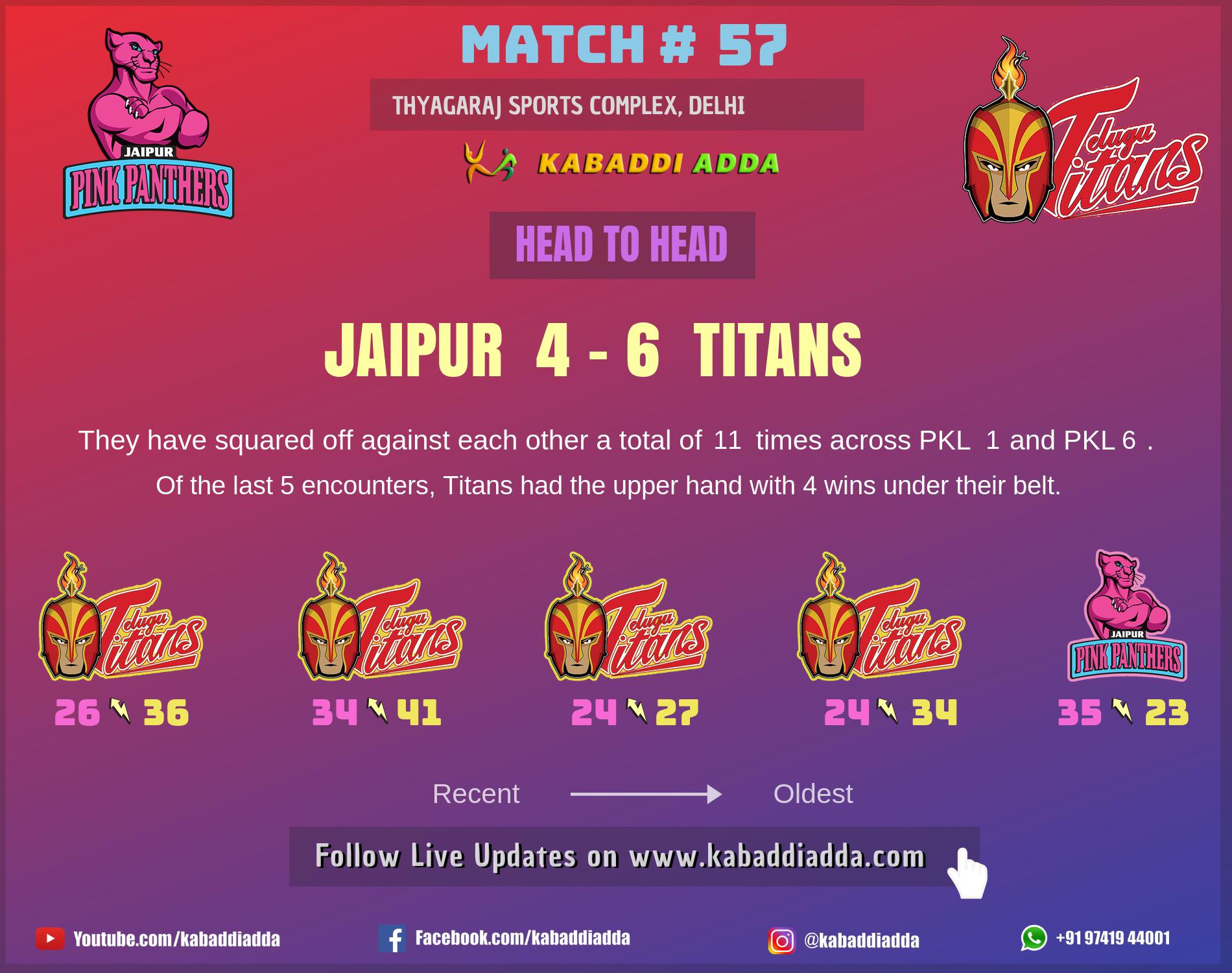