A stunning performance of Super 10 by raider Abhishek Singh and prolific support of High 5s by captain Faizal Atrachali and right corner Harendra Kumar helped U Mumba to register a dominating win over Jaipur Pink Panthers with a scoreline of 47-21. This defeat was Jaipur's third on the trot and biggest in terms of points margin this season.

The first half of the match only sung glories of U Mumba. They made a flying start and gained a 5-0 lead in the initial stage of this half and thus the Panther's side was reduced to two men. Following this, the U Mumba side inflicted an all-out in the 9th minute itself and took a six-point lead against the arch-rivals. U Mumba maintained this dominance over Jaipur and again inflicted an all-out with the help of raider Abhishek Singh and the 'Sultan' of the game Fazel Atrachali. This gave U Mumba a 16 point lead over Panthers, which was one of the largest lead advantages in this season of PKL.

Harendra's Dash on Deepak Narwal followed by Abhishek's Frog Jump over Amit Hooda ensured Jaipur Pink Panthers had just a couple of men left on the mat inside the first two minutes of the second half. Harendra added another point to his teams total and scored a High 5, which enforced another all-out on Jaipur Pink Panthers. Jaipur Pink Panthers defense finally got on the board as Amit Hooda blocked Deshwal giving his team their first tackle point of the night. Then after a couple of super tackles by Jaipur side helped them to cut the deficit of points by 20. It was not too late when star raider Abhishek Singh stepped in and got important points for the team which eventually helped his team to inflict the fourth all-out of the match.

U Mumba power past Jaipur after a dominant performance and moves to the 5th spot.

In the final minute of the match, star raider Abhishek Singh did a wonderful super raid by scoring 4 points and eventually scoring a Super 10. Thus after such a fantabulous performance by U Mumba, they managed to win the battle by a difference of 26 points.

Match Preview: Will Jaipur Pink Panthers be able to get their form back against U Mumba?

Start of phase 2 of the tournament, has the season 1 champions playing the season 2 champions. Jaipur after starting the tournament brightly has now had 3 losses in the last 4 four games. Will both Deepak & Amit Hooda - be back in full form? The last 7 game sequence for U Mumba has been LWLWLWL, will they believe in astrology and win the next game to keep their playoff home alive? Stopping bulls requires that Surinder put some fantastic dashes. Giants don't want to sacrifice points in this game.

Head to Head: U Mumba vs Jaipur Pink Panthers 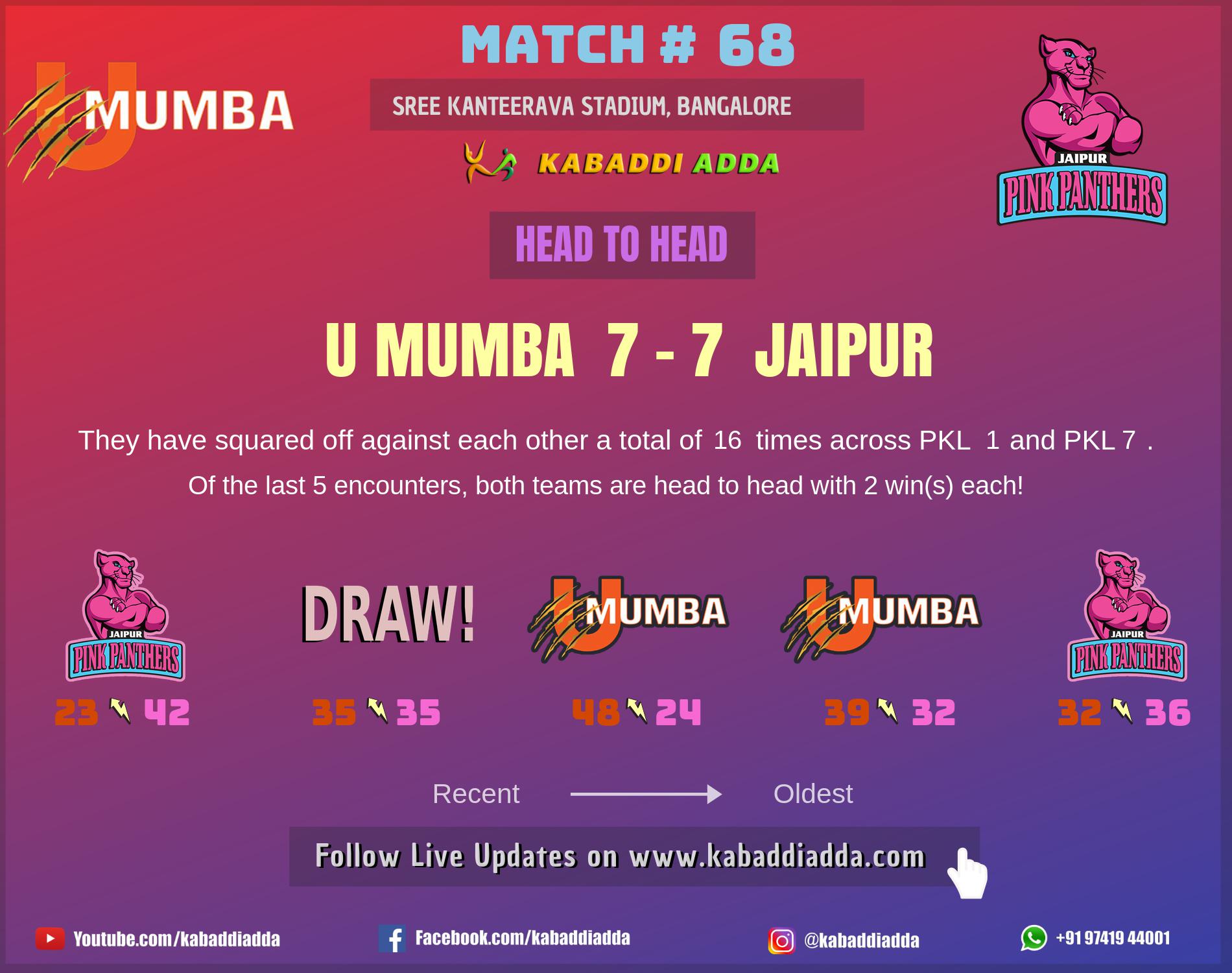