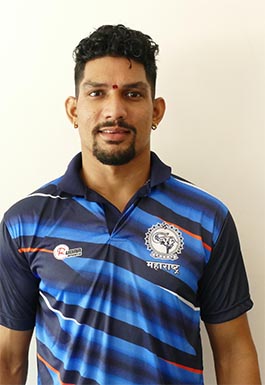 Rishank was born on 3rd February 1994 and brought up in Santa Cruz, Mumbai. Rishank was just three when he lost his father in a drowning accident. It was all left to his mother to take care of him and his sister. She started working in a beauty parlour to provide for the family and gave his father's autorickshaw for hire. Rishank had started playing kabaddi from a young age of seven. His mother always opposed playing kabaddi fearing he would get injured. Being more robust and having a good build compared to his friends, he knew he could excel in kabaddi. Unfortunately, his school didn't have a kabaddi team.
The only other sport he could take up was football, that too, only because he revered Cristiano Ronaldo as his role model. He never had a similar enthusiasm for football as he had for kabaddi and
played the sport half-heartedly.

He finished high school and subsequently joined Chetana Hazarimal Somani College of Commerce for his bachelor's degree and started playing local kabaddi tournaments for the Sagar Krida Mandal kabaddi team. During which, he injured himself, and ended up hospitalised for a few weeks. The dire financial situations at home took the better of him, and he was forced to drop out of college to support his mother. He joined the Leela hotel as a waiter to earn an income and found solitude in kabaddi after work.

Rishank's life took a big left turn when he got selected to Mumbai district kabaddi team. In one of the matches, Coach Pratap Shetty saw his talent and took him under his wing, moulding out the better kabaddi player within him. Rishank, soon being selected to Maharashtra state team, had already become a winner in the mat. The next big leap was when coach Rajesh Padave approached him and offered him Rs.5000 scholarship for joining Dena bank kabaddi team. Joining the team would mean quitting the job and choosing kabaddi as a career. With the responsibility of the family in his hands, he convinced his mother and decided to join the team. He was bestowed with the best player award in his first match and selected to the state team.

Competing in national level tournaments earned him a vocation with Bharath Petroleum and in 2014, and got signed in to the Pro Kabaddi League with U Mumba for Rs 5.25 lakhs.
The team led by Anup Kumar made it to finals of the first season but lost to Jaipur Pink Panthers. In the second season, they turned the tables around winning the finals of the tournament beating Bengaluru Bulls with a 6 point lead. Rishank's performance under pressure as an all-round performer backed U-Mumba to clinch the title, earning him the nickname Mr Do or Die.

Season 3 would become one of his the most successful tournaments in PKL, earning over 106 points from 16 matches. His signature moves the running hand touch, and the escape was lethal to the opposition. In season 4, Rishank could not recreate the stellar performance in season 3. Even though he had a majority of successful raids, compared to the previous seasons, he could not deliver as promised. He scored 70 points from 14 matches.

After a struggling performance in season 6, Rishank could score only 100 points from 23 matches due to an injury which he was recovering from during the season. Rishank is currently playing for the UP Yoddhas for Season 7, hoping to give his all, making up for the setback in the previous season.

PKL Season 7 had been injury-stricken for Rishank and he could not repeat the performances of his previous seasons although he contributed in certain crucial situations. He considers his time under Anup Kumar to be one of his best and where he was moulded into a better raider. Aside from the PKL, he played for Bharath Petroleum in various national tournaments and the consecutive wins of his team, raising his diminished credibility. Rishank signed to UP Yodhas for season 5 of PKL 2017 amidst high hopes. Unlike the last season, he wanted to outperform himself, and he did. His game with the Jaipur Pink Panthers saw him score 28 points in a single match, topping Pardeep Narwal's record. Pardeep would later break the record scoring 34 points against Haryana Steelers. In 2018, the Maharashtra state team led by him won the Senior National  Kabaddi Championship at Gachibowli Stadium, Hyderabad.

The Kabaddi Masters Tournament in Dubai witnessed Rishank's debut as a national player winning gold for the country. He would wear the Indian jersey again for 2018 The Asian Games in Jakarta, but his journey cut short when India was knocked out by Iran in the semi-finals.