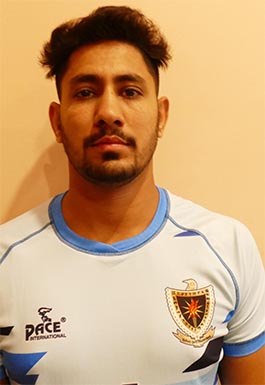 Sandeep Kumar Dhull is an outstanding and well known Left Corner Defender. He was born on the 10th of February 1996 in the district of Kaithai in Haryana and belongs to the Jat family. He is nicknamed as Baachi by his friends, teammates, and loved ones. Sandeep was passionate about Kabaddi from his childhood and stepped into the mat at the tender age of 10. From the very beginning, he was very vigilant and tried to learn as much as he could from his inspiration and icon Joginder Narwal. He was very much fond of Narwal’s ankle hold and found ways to master it and add it to his arsenal.

Sandeep is a graduate from Kurukshetra University. His coach, Shri Rajbir Singh is his greatest strength and has a good relationship with him until today. He was the one who identified Sandeep’s unique potential for swift movement and quick reflexes ideal for a corner defender. He trained him harder to make him the best player and motivated him through tough times like injuries.

His talent and performances at the college level took him to Junior National Indian Camp. From there he, later on, advanced and got selected to the Inter Senior National Indian Camp where he got a platform to showcase his true potential in Kabaddi. Sandeep always stood as the youngest and the best-left corner defender whose performance brought the feeling of exhilaration in the game and also to the fans.

Sandeep made his debut in Pro Kabaddi Season 3 representing Dabang Delhi in a match between Delhi and Jaipur. He debuted with a phenomenal impression through this match and subsequently during the season where he scored 32 points in 10 matches played (which is a pretty successful tally for a young corner defender).

He was the lone warrior in the weak Delhi defense for the season. In season 4, he joined Telugu Titans and partnered with Sandeep Narwal to form an invincible right left corner combination. He bagged his career-best performance from his very first match where he scored 8 tackle points in 9 attempts. He is a quick learner and that gives him the power to defend well against his opponents by learning their moves and acting on instincts.

Sandeep is known to have an aggressive nature on the field and had brought some hardship over the years in his career as due to some problems he went unsold in Season 5 even after an exceptional performance in Season 4 where he scored 35 points from 12 matches. But his passion for Kabaddi retrieved his true potential and kept his name alive as one of the best-left corner defenders who puts his heart and soul into his game.

He returned to Pro Kabaddi Season 6 with Jaipur Pink Panthers. The Pink Panthers bought him for Rs 66 lakhs which was among one of the highest amounts paid till then for a young left corner defender and was retained in Season 7. In season 6, he earned 67 points out of 22 matches played. In Season 7 although he improved his performances and earned 74 points from 22 matches, he could not take the Panthers to the playoff stages.

Sandeep as a player always followed strict disciplinary virtues and avoided many injuries. His unique style in defending makes him a constant threat on the mat. It is no doubt that in the future this prodigy will earn accolades for his teams and get the recognition he deserves. He is truly an asset to the sport of Kabaddi and might be one of the future left corners of Indian team if groomed well.

Sandeep showcased vicious strength through his moves like back hold, chain tackle, and diving knee hold. But his main weapon is his ankle hold through which he gets many fierce raiders out. He has perfected his ankle hold to a degree where he could be called an ankle hold specialist after Surender Nada.

Outside the mat, Sandeep always found his way to tackle the stress by traveling and is very much fond of dancing.