Delhi Dabangs have been in great form. They sit at the top of the table, they have won 5 games and drawn 2. They are still unbeaten so far. And one of the stand-out performers in their team has been the Great Naveen Express. He has scored 126 points with 7 consecutive super 10s in 7 games. No defence seems to have an answer to his fiery raids. 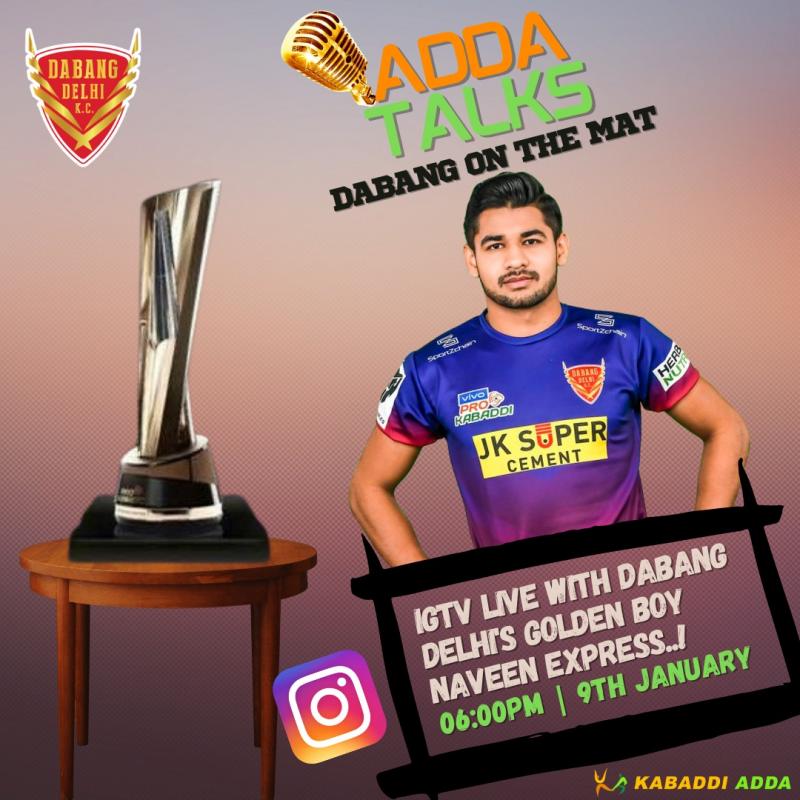 In our exclusive interview with The Naveen Express, we asked him about his journey so far, the plans for the season ahead, moral in the camp and what makes him who he is.

If we talk about your team it consists of 4 super well-known veterans. Manjeet Chhiller, Jeeva Kumar, Ajay Thakur, Joginder sir. And even your coach Hooda sir is a
well-known personality in the Kabaddi circuit. What all have you been able to grasp from them so far?

"Yes, I have learned a lot from them. They have improved my game, you can see the fruits of it this season. They are always communicating with me about what to do, what not to do. Before the game, after the game, they were always there to give me useful tips. Even when to go all-out or when to do a safe raid."

According to you, who among these 4 legends is still young at heart? Who behaves like a kid with you?

"Jeeva sir is surely not one of them, he talks less. But the rest of the 3 are all kids at heart. They joke around and play pranks with the whole team, not just me which is unlike their serious faces during a match."

There are many youngsters like Ashu Malik, Krishan, Rakesh, Meetu, Jaideep who have all stepped from K7 Kabaddi to PKL. According to you how important are such tournaments for these youngsters?

"Tournaments such as these are very important for these youngsters to showcase their talent. These platforms are needed where youngsters can show their metal, talent, and potential. From here on, they will further get scouted by coaches, owners to reach the professional circuit such as PKL."

We have seen a lot of female fans commenting on your posts. Any such memorable incident from a fan that you would like to share?

"No such moments per say, as our coach makes us switch off our phones so that we can focus on our upcoming match. In very rare moments I get to reply to them personally."

Fans have showered you with love from all over. How do you feel about this fame and love that you are receiving from them?

"I would like to thank all the people for the love that they have shown me. Their blessing and their good wishes are all with me. They have made my parents proud, and given them the feeling that their son is well known around India now. "

In the 7 matches that have gone by 50 % of the points have been scored by you? Does this put some kind of extra pressure on you?

"No, not really. If such was the case I would have failed to score so many points. The experienced players have always motivated and backed me up. Because of them I am always relaxed when I am out on the field. "

Like you were tackled a lot in the previous games. So when you go back on the bench, how do you assess those tackles?

"We go back in the dressing room and look back through match videos and look at what went wrong there. Our coach sits with us and tells me step by step, what I did wrong and why I got tackled there."

Is there any defence out there, against whom you think that you will have to do something different because they are tough?

"Every defender thinks of how to stop the raider. At the end of the day, it is a battle and, everybody wants to win it. Someday we win and, on some, we lose. And that's how we move forward."

We were also joined by Suhail Chandhok, who expressed his joy seeing Naveen perform even better this season.

He asked him about how the experienced players in the team make everyone feel equal and break the ice for youngsters to be more at ease.

"Yes, the senior players in the team make sure we all are at ease. They tell us we are all equal in the squad and have one goal  which is to win for the team."

In your first season, you started slow. Were you disappointed at that time?

"In my first season, my first game was against Giants. It was the first time I had seen such a huge crowd. I got nervous and my team members could see that. But my coach told other players to let him be out there on the mat because if we took him out now, he will never be able to play again in this tournament. In the next match, I scored 7 points and, in the next a super 10. The faith they had in me helped me overcome those nerves."

As we talked about young players earlier there is one such player who comes from the same village as you. Mohit Goyat idolizes you and wants to break your records. Do you feel threatened?

"It's a matter of great pride and, I feel happy. When I came in, I use to idolize other players and wanted to break their record. It is the same case for Mohit. He is a young, talented and, skilful lad. And I hope he develops into a great player and breaks my record so more players from our village get inspired to pick up the sport."

Jagbir Sir was both your as well as Mohit Goyat's coach back in your village. From when did you start training under him?

"I started my kabaddi training under Jagbir Sir back in 2010. There was a government scheme under which if you got selected you would get money for training and for your meal. So at first,  I joined it because of the money. It took me some time to get used to the training, as some of the lads were already ahead of me when I joined in. I started under the B team wherein I polished my skills. I used to play as a corner, when i started. But when I reached the A team, I got a chance to play as a raider as well. My coach acknowledged that I got more skills as a raider, so he told me to stick to it. In the National School Games 2017 I won the best raider award. My coach told me it's just the start, and sky is the limit for you."

Last question for the day- Dabang Delhi have been undefeated so far and are at the top. So what are the team discussions these days, is there any pressure to stay on top?

"Our coach doesn't let us take the pressure. He tells us every team is equal for us as opponents, there are many matches still left to play so, we have to keep our focus high."

Naveen told his fans to stay safe and keep their mask on during this covid period and thanked fans for all their support till now. He hopes to see them soon.