After a hiatus of 2 years and 2 months PKL 8 is back bringing with it top-class Kabaddi. U Mumba is one of most consistent and top performing teams in PKL. Last year they were edged out in the semifinals by the eventual champion Bengal Warriors. They are led by the only Iranian captain in the league Fazel Athrachali.

Bengaluru Bulls also made it to the semi-finals in PKL7. Bulls are my favorite to seal the opener of PKL8.

Reason #1 : PAWAN SEHRAWAT. Bulls are significantly more accomplished in their raiding. They are led by the league’s most prolific raider Pawan Sehrawat who scored a massive 359 raid points in PKL7. It was a one-man army in PKL7; but the Bulls have strengthened both their raiding and defense in the PKL8 auctions. They have Chandran Renjith and Deepak Narwal to support Pawan in raiding.

In PKL7 only one team was able to put brakes to Pawan - that was Puneri Paltan led by right cover and captain Surjeet Narwal.

U Mumba defense looks incomplete on paper. Other than captain Fazel Athrachali who was the best defender of PKL7, there are no known names in the squad. With no big names in the right half of their defence, they might prove easy pickings for the Bulls captain. Rinku, U Mumba right corner, we have seen play in the K7 Qualifiers Haryana. But it will be tough to stop Pawan in full charge.

Pawan who is a right raider will come straight at Fazel standing in the left corner. If Fazel is able to take out Pawan consistently, U Mumba can make a match out of this.

Reason #3 : Will Ajit Kumar be a fair replacement for the young services raider Arjun Deshwal?

Ajit Kumar is a super star from Salem TN. This will be his opportunity to raid fearlessly and prove his ability. However, standing in his way will be the time tested Bulls defense. Coach Randhir Singh has carefully groomed the trio of Saurabh Nandal, Amit Sheoran and Mahender.

All in all Bulls look charged to take this game.

Match 1 - U Mumba vs Bengaluru Bulls 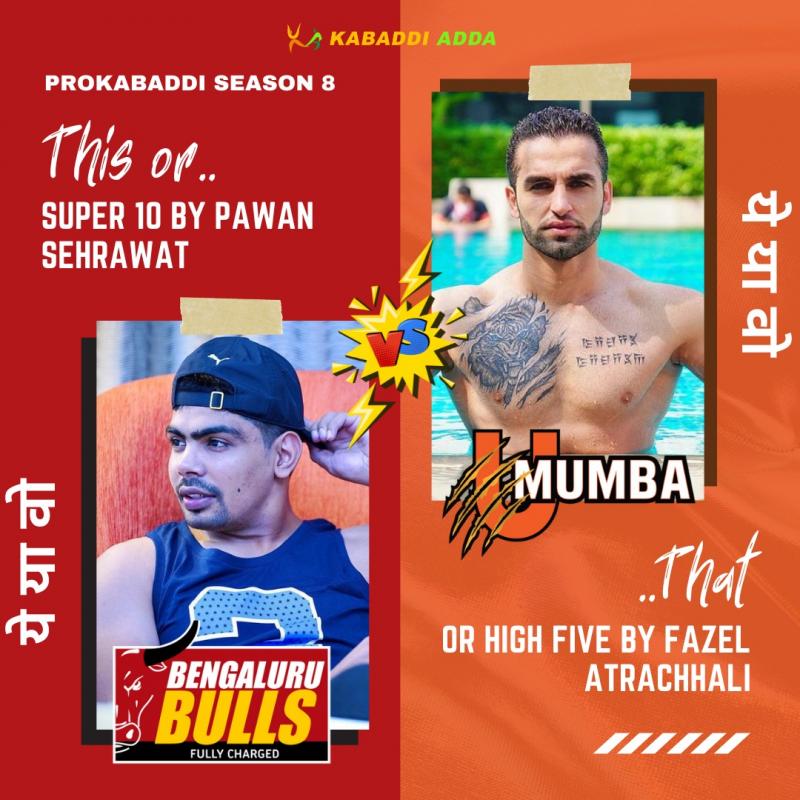 Players to Watch out

We are going with both raiders from the Bulls with Pawan as captain. Ideally, we would have preferred to include either Abhishek Singh or Ajit Kumar - however, that would leave us with a weak defense. Ajinkya Kapre is one of the few all-rounders to be in the starting 7s; so he was the only all-rounder to be included.

When it came to defenders, we have gone with a corner heavy defense - since corners typically get more chances compared to covers in Kabaddi.

It is a no brainer to choose Pawan as captain; he has been delivering consistently in the last 3 seasons. Same with Fazel, who will be the vice captain in our squad.