The load is off the back and now the dragon is ready to fly and spread destruction! Yes, we are talking about Pardeep Narwal, one of the most skilled and gifted raiders the sport of Kabaddi has ever seen. The final match of Day 1 late in the night at 9.30 pm will witness the beast unleashed against the might of a champion team, Bengal Warriors. Both brilliant teams and likely to find themselves in the playoffs in the latter stages of the tournament.

Here are 3 reasons why we believe that UP Yoddha might just hold the edge in this mouth-watering Wednesday clash.

Both Pardeep Narwal and Shrikant Jadhav are left raiders and will attack Bengal’s right corner - fortified by Abozar Mighani. Abozar is a fearsome defender but in his previous season with Titans, he was error prone. With all pressure of captaincy and the pressure of going for a bulk of the raids off Pardeep’s shoulder; he is likely to break free. Shrikant Jadhav the Maha raider from Railways has also proven to be a very consistent raider and the mainstay of the UP squad. Shrikant will deliver in the Do-or-Die raids and Pardeep will have the freedom to go for the high risk raids.

Reason #2 : The young and mature UP corners.

UP Yoddha have found themselves in the playoffs every season. They have stuck to their defense led by right corner Nitesh Kumar. Nitesh is now supported ably by Sumit Kumar in the left corner - both of whom scored 76 points in PKL7. These fearless corners have the willingness to put in 6-8 tackles every match making them a lethal combination. That said, these corners will face the wrath of Maninder Singh, Sukesh and Ravinder Kumavat.

PKL7 saw the likes of Jeeva Kumar and Baldev hold fort for Bengal. Bengal was in for a winner’s curse where most of their defenders became pricey to retain. They have Iranian Abozar Mighani and Vishal Mane manning the right flank - the most sought out by both Pardeep Narwal and Shrikant Jadhav. Nabibaksh’s support is what might change the fortunes for the Warriors.

These reasons make UP Yodhas slight favorites in the final match of the opening day. That said BC Ramesh doesn’t know what losing means and he is here to defend the title for Bengal Warriors.

Match 2 - Bengal Warriors vs UP Yoddha 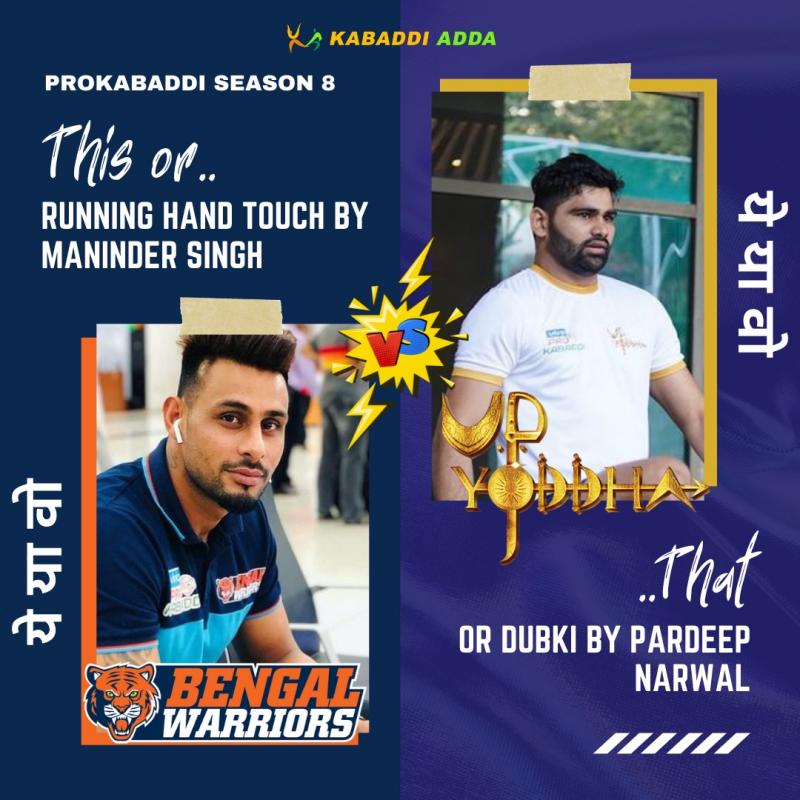 Players to Watch out:

How can one form a squad without Pardeep Narwal or Maninder Singh. We have sacrificed a 3rd raider to get these two superstars in our fantasy squads. They will be our captain and vice captain.

Followed by an all UP Yoddha defense of Nitesh Kumar, Sumit Kumar and Ashu Singh - the trio is likely to score 8-10 points in the match.

We have also managed to squeeze in the all-rounder of the tournament - Md Nabibakhsh. Finally we have included Shubham Kumar who is likely to be the left cover for the Yoddhas.