Bengaluru Bulls registered a 35-33 victory against U Mumba in the match number 109 of the Pro Kabaddi 2019 on the last day of the Jaipur leg. With this win, the Bulls went past U Mumba to be on the fourth position on the Pro Kabaddi Points Table, strengthening their position to make a place in the playoffs. With skipper Rohit Kumar being rested, Pawan Kumar Sehrawat successfully led the Bulls to a win, with him scoring a Super 10 once again.

5 reasons why Jaipur lost the match:

1. U Mumba Captain Fazel Atrachali had a terrible day on the mat, Scored only 2 points

2. High 5 by Saurabh Nandal, An amazing back hold was the moment of the match for him on the way to getting a High 5

3. 13 unsuccessful tackle attempts by the U Mumba defense, All the defensive unit failed to stop Pawan and Banty

4. Pawan Sehrawat's raiding and captaincy, In the absence of Rohit Kumar, Pawan Sehrawat was captaining the Bulls squad. Pawan had a massive Super Raid just on the stroke of half time to get a massive 7 point lead for the Bulls.

Pawan Sehrawat plays raider, captain, corner and coach for Bulls to edge out U Mumba

Raiders from both sides started the match by picking up points and keeping the other team on the toes. The scores were leveled for the most part in the first half of the match. With just four minutes remaining in the first half and scores at 10-10, Sumit Singh made a successful raid while Amit Sheoran tackled Abhishek Singh to give Bengaluru a two-point lead. Pawan Sehrawat got a Super Raid in the 19th minute of the match and got the Bulls a seven-point advantage over the Mumbai based team.

In the second half, the Bengaluru defense took hold of the game as they tackled Athul MS in the very first raid for Mumbai in the second half. Sehrawat also chipped in with his contribution on defense as he got hold of Abhishek Singh. Banty then scored a two-point raid to send Mumbai's top defenders Fazel Atrachali, Surinder Singh on the bench, reducing the team to just three people on the mat. Saurabh Nandal tackled Athul MS and Pawan got two back to back successful raids as the season two champions were handed yet another all-out 27th minute of the match, and the Bulls leading 28-16.

U Mumba fought back as Abhishek Singh went on a successful raiding spree and eventually completing his Super 10. The Mumbai team kept on chasing the Bulls and closed the score gap to four points by inflicting an all out in the 35th minute of the match. However, that did not seem enough as the Bulls never gave away their lead and the last few raids went in Bengaluru raiders wasting their time during the raids. Abhishek Singh and Athul MS scored 10 and 9 points respectively but the effort went in vain.

The Bulls now climbed on the fourth spot in the points table with 58 points while Mumbai in fifth place with 54 points. Both the teams will now be traveling to Panchkula as U Mumba will face Tamil Thalaivas on 30th September and the Bulls playing against Haryana Steelers on 2nd October.

Match Preview: U Mumba look to continue winning run against the Bulls

The 109th match of the Pro Kabaddi 2019 will be played between U Mumba and Bengaluru Bulls at Sawai Mansingh Stadium in Jaipur. The Mumbai based team will be looking to continue their winning run in the league to cement their position for the play-offs. On the other hand, the Bulls have been win less in their last three matches and will be looking to get back to winning ways. The two teams had met each other in Mumbai earlier in July where the Bulls had won the encounter 30-26.

Head to head: U Mumba and Bengaluru Bulls 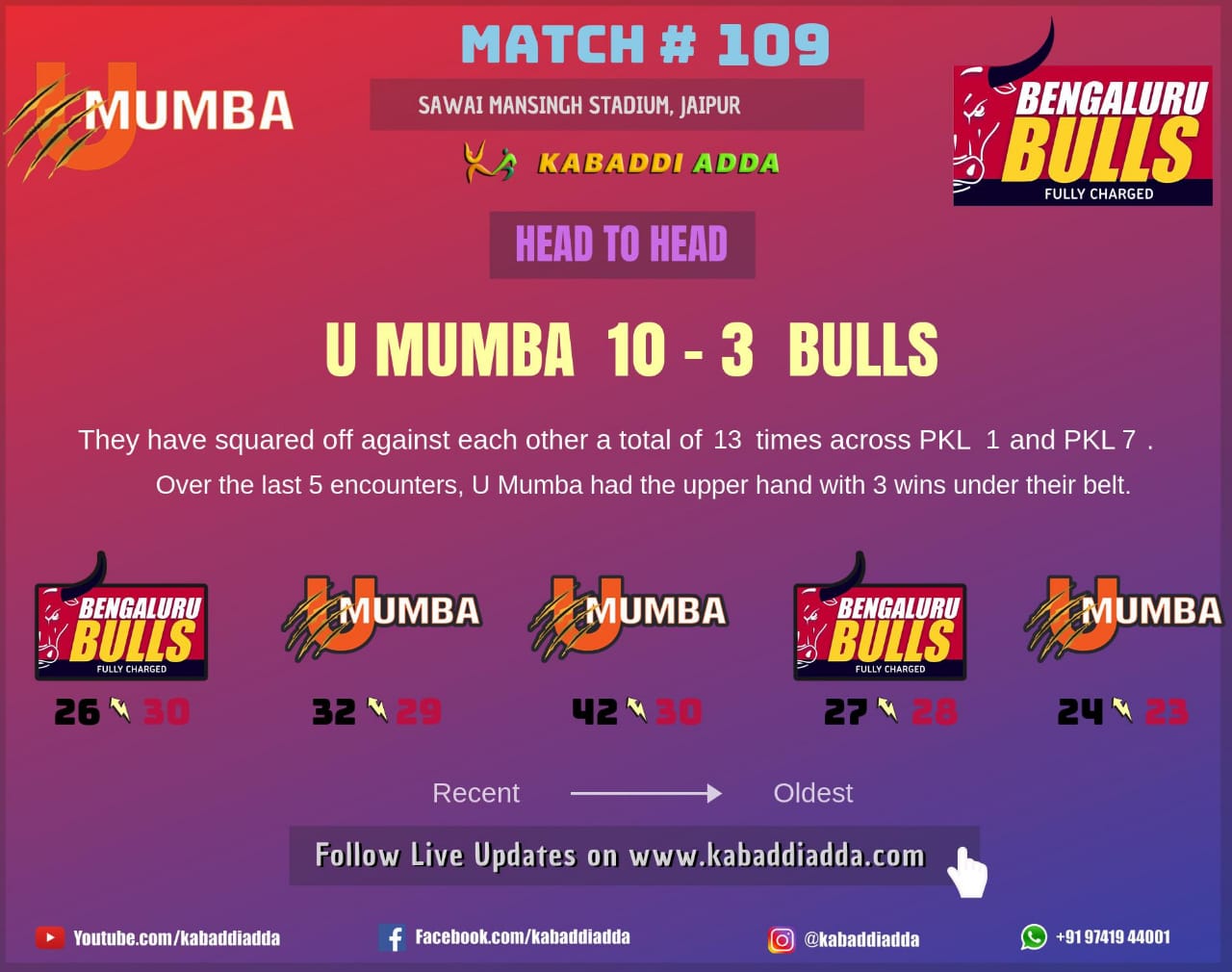