5 reasons why Jaipur lost the match:

1. Nilesh Salunke is showing signs of experience, Pink Panthers have struck Gold with Nilesh Salunke, as he is continuing his good form over the last couple of matches.

2. Rajnish's Super 10, The youngster displayed some brilliant skills as he completed his Super 10 in raid points and also picked up 1 tackle point..

4. Deepak Niwas Hooda led Jaipur Pink Panthers raiding, he led his raiding squad with 13 raid points, as he got support from Deepak Narwal and Nilesh Salunke.

5. Bahubali rose from the ashes to conquer Jaipur, Siddharth Desai has scored 22 points with 16 successful and got out just 2 times in the entire match. With this win after back to back loss Telugu Titans are still alive in the playoff race.

A fiercely contested first half saw both sets of raiders dominating the mat. Telugu Titans started on the front foot with Siddharth Desai looking his unstoppable best. But for the Pink Panthers, the duo of Deepak Hooda and Deepak Narwal were also looking sharp. Sandeep Dhull in the left corner had a horror outing and was sent to the dugout six times by Siddharth Desai. Siddharth spared no defender of Jaipur, as he cruised to 13 points in the first half from his nine raids. The half ended 17-15 with Titans on top.

Jaipur's Nilesh Salunke reached 300 raid points milestone and Sandeep Dhull crossed 200 tackle points but that was the only good news for the home side from the match as they struggled to contain Siddharth Desai for the entire match.

The Titans and Siddharth Desai were in no mood to let the Pink Panthers come back into the game and the raider ensured his team secured their first All-Out of the match in the third minute of the second half. The 'Bahubali' secured another All-Out in the 7th minute of the half to open up a 13-point lead. There was no coming back for Jaipur after another All-Out was inflicted with less three minutes remaining in the match. The Titans' defense ensured there were no slip-ups in the final minutes to secure a win. Deepak Hooda scored 12 raid points but was left wanting from their defensive unit. The bad result at home meant Jaipur's chances of qualifying for the playoffs also significantly reduced.

The Season 1 champions Jaipur Pink Panthers picked up their first home win of the season in their last game and they will be looking to finish their leg with another victory in front of their passionate fans. Telugu Titans, on the other hand, must win this game to keep their bleak playoff hopes intact having won just four matches this season. However, ‘Baahubali’ Siddharth Desai and his teammates will continue to fight till the final game in keeping with their team spirit. Jaipur Pink Panthers target returning to the top 6 in the Vivo Pro Kabaddi Season 7 standings with a win against Telugu Titans. 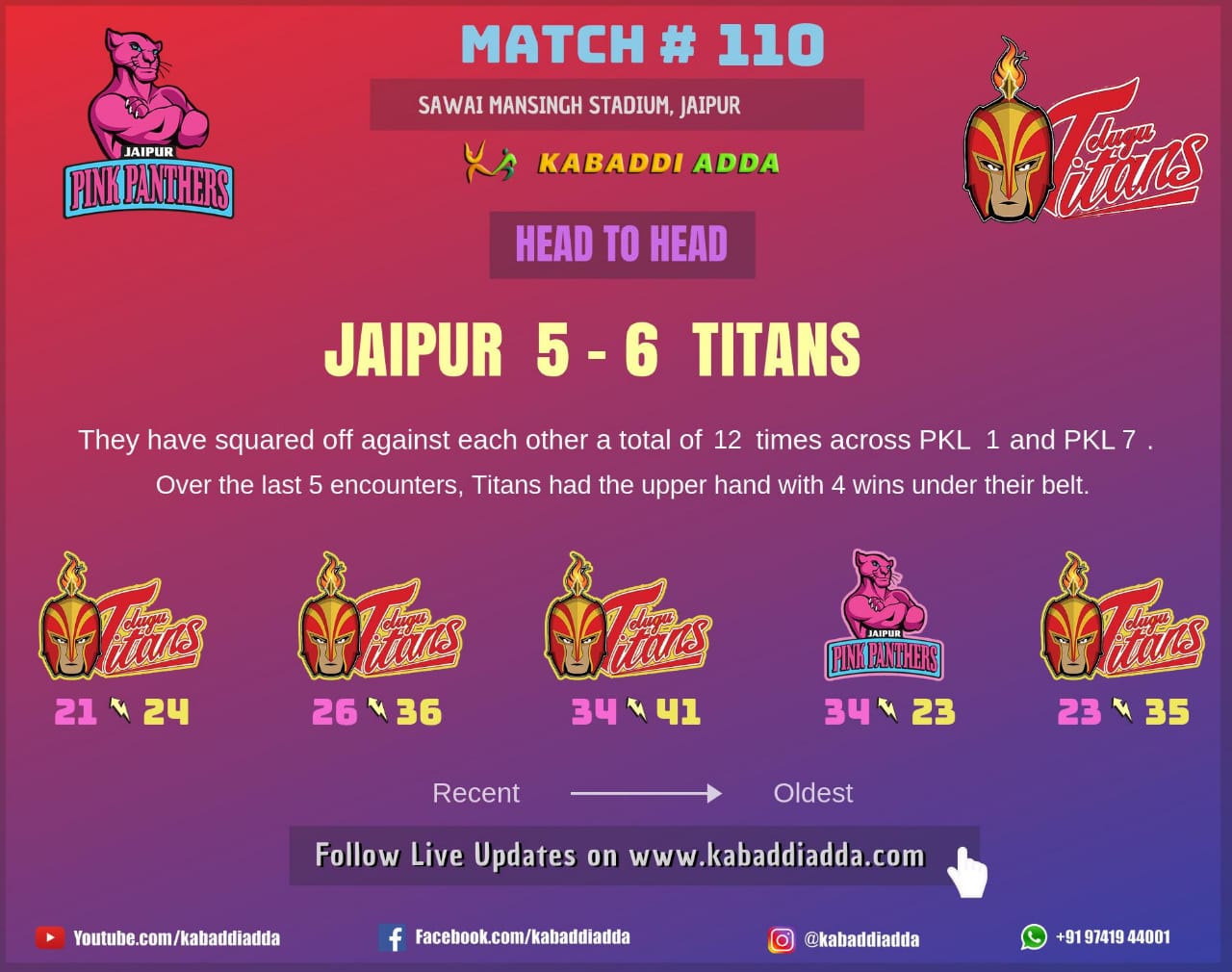