Sukesh Hegde (6 raid points), Mohammad Nabibakhsh (seven points) and Rinku Narwal ( High 5 with 5 tackle points) impressed for the Warriors as they picked up a win to go top of the VIVO Pro Kabaddi League points table. Rahul Chaudhari scored 7 points for the Thalaivas as they finished their woeful campaign with another loss. The star-studded Chennai-based team managed only 4 wins the entire season.

Tamil Thalaivas approached the match with confidence, having beaten Jaipur Pink Panthers in their previous outing, and opened a lead in the early minute's thanks to Ajith Kumar and Rahul Chaudhari’s raids. Rahul moved well on the mat to pick up valuable points but Bengal’s defense got into the game with Mohammad Nabibakhsh impressing. Soon Bengal were in the lead but Thalaivas regrouped well to stay in the match. Bengal, sadly, looked like a side who had their eyes set on the semi-finals clash next week, and their lack of ruthlessness allowed the Tamil side to make a comeback and level the points. The first half ended with the scores 13-13.

The Bengal Warriors stepped up their game in the second half thanks largely to raiders Nabibakhsh and Sukesh Hegde. Though Ran Singh pulled off a Super Tackle in the fifth minute of the half it was just a case of delaying the inevitable with the Warriors picking up their All-Out in the 8th minute to open up a 6-point lead. Thalaivas’ Ajith Kumar was in no mood to be contained though and his raids made it a two-point game soon after the All-Out. But Rinku Narwal produced a Super Tackle with 7 minutes remaining to halt Thalaivas’ domination. Sourabh Tanaji Patil also chipped in with valuable raid points for the Warriors as they once again opened up a 6-point lead with two minutes remaining. The Bengal defense held firm in the final minutes to clinch a victory.

Bengal comes into this game on the back of a record-breaking defeat to Patna Pirates. This was the first defeat for the Warriors after 7 wins in a row. Very exciting 2nd string in Bengal, Tamil need to see if their second trying side can beat the second string warriors. The result today will not affect the table standings for either team. Which players will play starring roles today. Rakesh narwal and Saurabh Patil both scored points against a weak Patna defense. Similarly, V. Ajith Kumar helped the Thalaivas to kill any remaining hope for the Panthers. 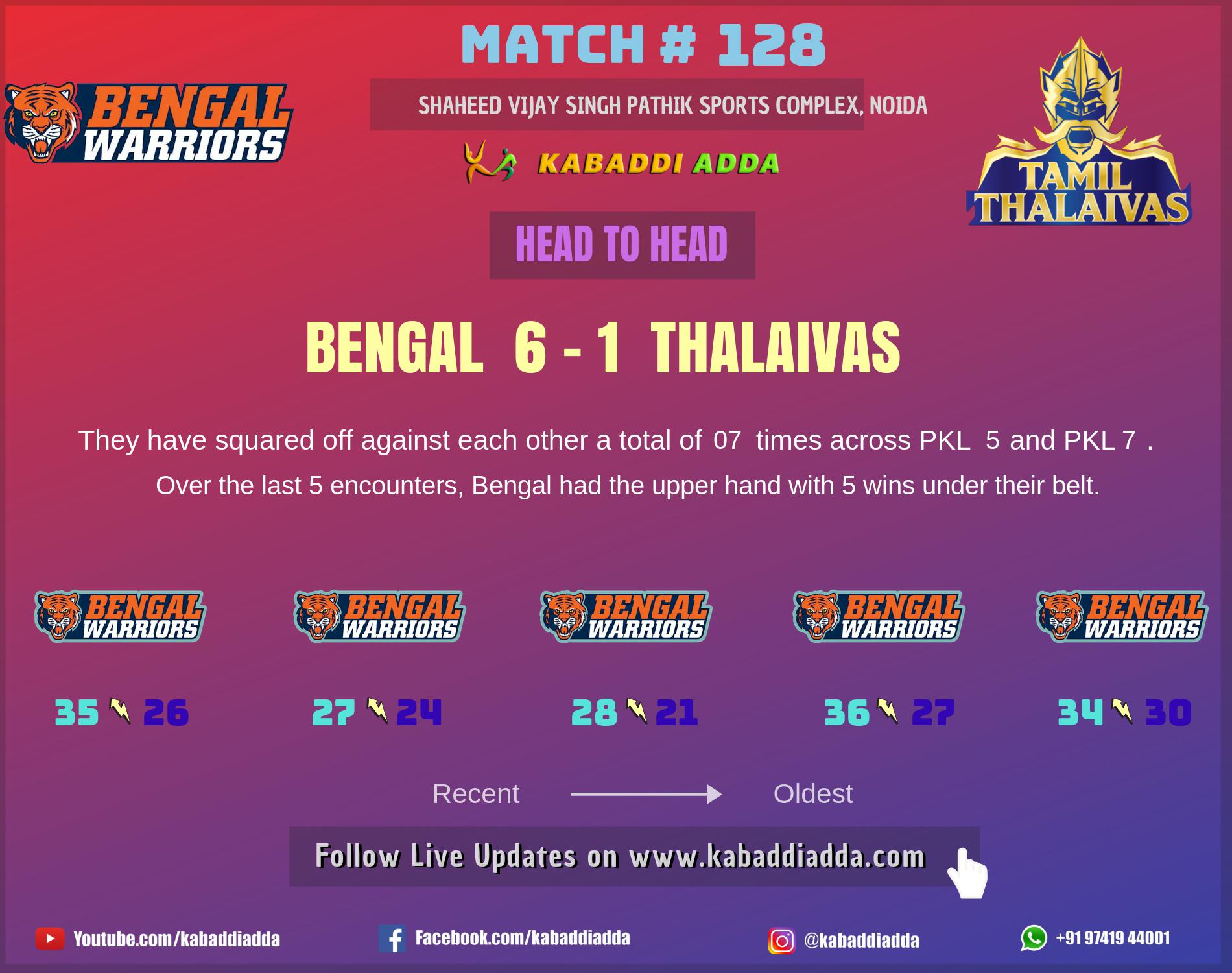