Telugu Titans defeated UP Yoddha 41-36 to end their Pro Kabaddi 2019 campaign with a win at Shaheed Vijay Singh Pathik Sports Complex in Greater Noida. It was also the first defeat for the UP team at their home. Siddharth Desai was the star of the game as he scored his 10th Super 10 of the season to end the tournament on a high note.

The match started with Siddharth Desai picking the first points for Telugu Titans. Krushna Madane tackled Monu Goyat, followed by Desai picking a two-point raid which gave the Titans an early 6-2 lead in the game. The hosts started crawling back into the game as Nitesh sent Siddharth on the bench with a successful tackle and Shrikant Jadhav getting a two-point raid. It was followed by an all-out in the very next raid to give Yoddhas a small lead which they extended as the first half got over.

Coming into the second half and trailing by six points, the Titans were still trying to find the momentum as Rishank Devadiga and Shrikant Jadhav picked up points in successive raids. UP inflicted another all-out on the Titans in the 24th minute to take a 28-17 lead in the game. Desai then went on a rampage as he sent back six of the UP players on the bench in seven raids and completed his Super 10 with an all-out on the home team in the 33rd minute. In the very next raid after the all-out, Desai got a Super Raid as they trailed only by two points.

Substitute Farhad Milaghardan assisted Desai in the raiding and the defending department. First, a touch-point on Aashish Kumar, followed by a two-point raid and a tackle on Monu Goyat meant second all-out on the hosts and Titans leading by two points with three minutes remaining in the match. Madane and C. Arun's successful tackle and Ankit Beniwal's successful raid sealed the game for the visitors as they registered the sixth victory of the season.

Match Preview: Titans take on UP Yoddha in their last match

Telugu Titans will be playing their last match of the Pro Kabaddi 2019 against hosts UP Yoddha at the Shaheed Vijay Singh Pathik Sports Complex in Greater Noida. With just five wins from 21 matches, the Titans will be looking to finish this edition with a win. UP Yoddha have already qualified for the play-offs and a win against the Titans will get them to the third spot in the Pro Kabaddi Points Table. They have also not lost their last two games at home and will be looking to continue to play in the same momentum. The previous encounter between these two teams had ended in a 20-20 tie.

Head to Head: UP Yoddha vs Telugu Titans 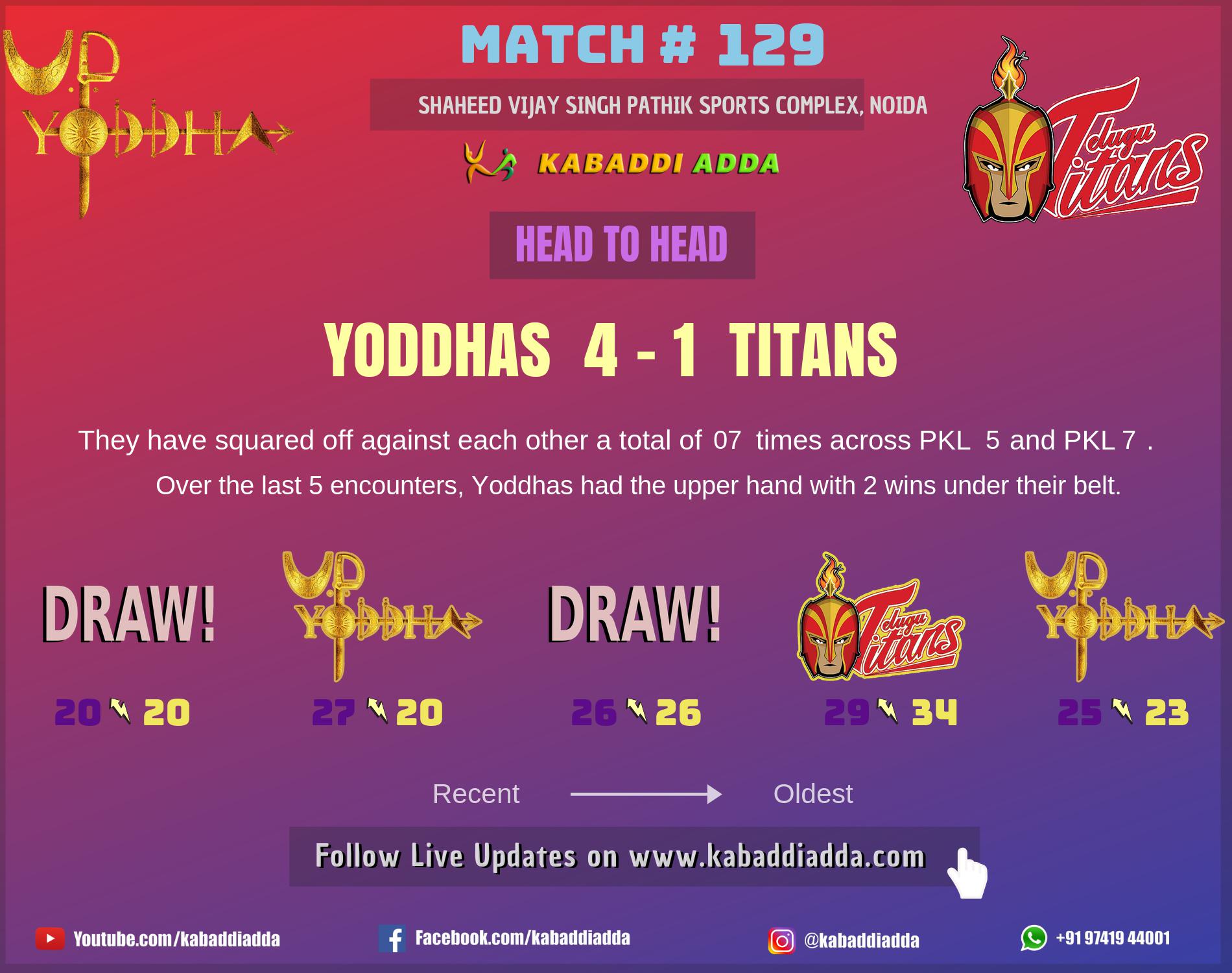