Bengaluru Bulls suffered a 23-32 loss against the Gujarat Fortunegiants in their opening match of the home leg of Pro Kabaddi 2019 at the Sree Kanteerva Stadium in Bengaluru. The Sunil Kumar led side showed an all round performance to notch up an important fifth win from 12 games for their team. Sachin Tanwar's return to the the team after an injury lifted the team spirits to cross the victory line and brought balance to the team that had 7 losses from their previous 8 matches.

The match started with both the teams picking up points in the first raid as Sachin scored a bonus point in very first raid, before being tackled in the same raid. Rohit Kumar then got a successful touch point for Bengaluru in their first raid but there wasn’t much to celebrate for the raiders for too long. With scores tied at 9-9 in the 11th minute of the match, Gujarat picked up pace and tackled Pawan Sehrawat and Sumit Singh to inflict an All Out to take a 14-10 lead. By the end of the first half, the Fortunegiants were leading 18-12.

The second half of the match also followed a similar template but got even harder for the raiders. Mahender Singh's two Super tackles cut down the deficit to just two points and Amit Sheoran tackled G B More in a Do-or-Die raid in the 35th minute of the match, taking the scores to 22-24 in favour of Gujarat. Sachin however crucially then picked up two points in a Do-or-Die raid ensuring a five point lead as the home team was yet again washed off for the second time in the final raid of the match to increase the lead to nine and therefore not give Bengaluru a solitary point either for a loss by seven points or less.

This win completed the double vs the Bulls and gave Gujarat their fifth victory of Pro Kabaddi Season 7, putting them in seventh spot on the points table. They are placed just below the Bulls who have six wins from 12 games. Fortunegiants will face Bengal Warriors in their next game to open the Kolkata leg on Saturday, 7th September while Bulls will play Tamil Thalaivas in a big Southern Derby on Sunday, 1st September.

The Bengaluru leg of the Pro Kabaddi 2019 will start with the home team, Bengaluru Bulls, taking on the Gujarat Fortune Giants in the match number 67. After their dominating win against the Jaipur Pink Panthers, the Bulls will be in high spirits. Both the teams have played each other 5 times and are tied with two wins each and one draw in the past. 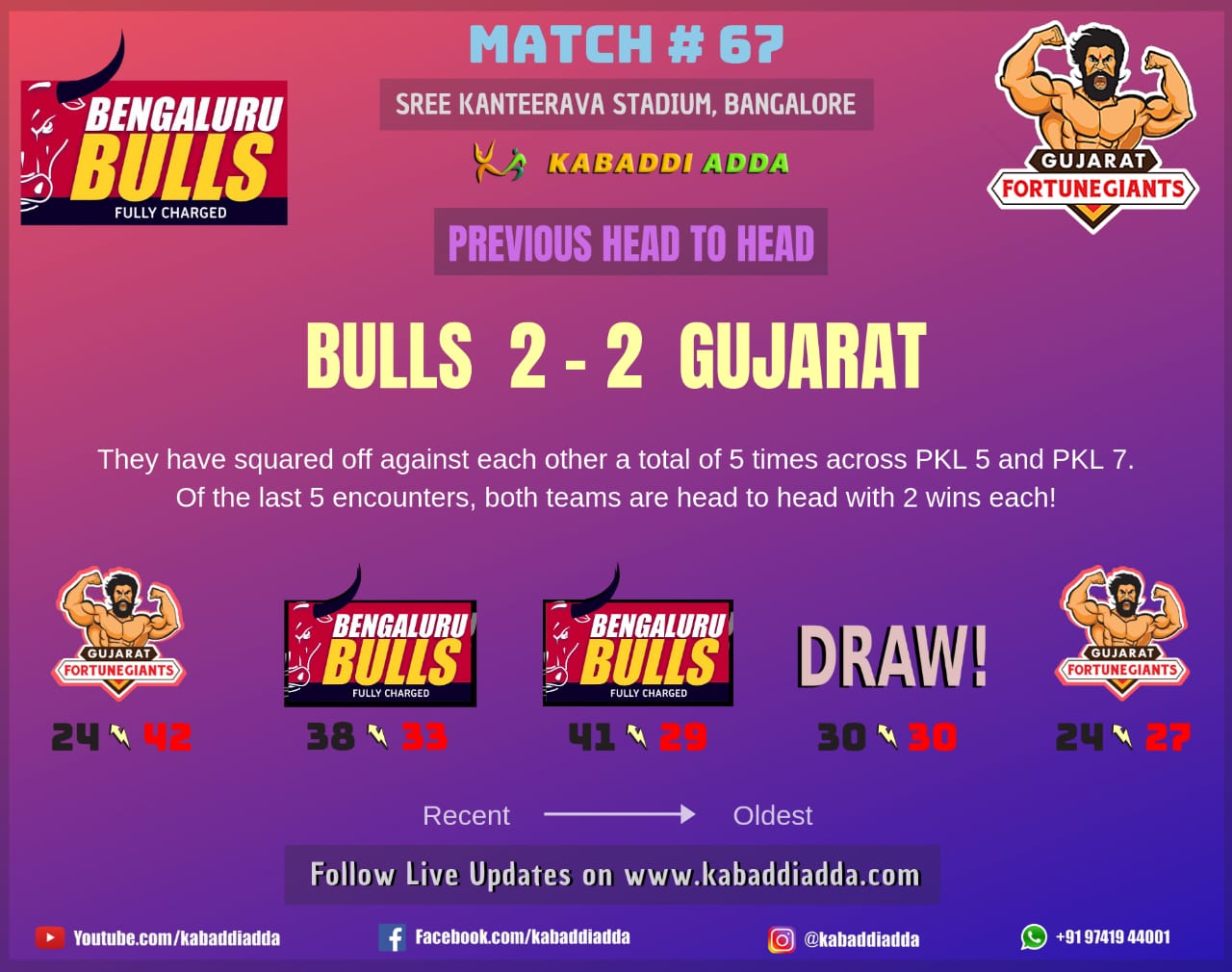