An exemplary all-round performance by the UP Yoddhas ensured they defeat Patna Pirates 41-29 in a one-sided affair at the Sree Kanteerava Stadium in Bengaluru on Friday. Shrikant Jadhav with 10 raid points and the captain Nitesh Kumar with 5 tackle points decimated the Pirates to seize their third victory in a row.

Pardeep Narwal scores 14, but Patna Pirates lose by 12 to UP Yoddhas | News Highlights

The first half was a story of a hard-fought comeback by the Patna Pirates, after trailing for the majority of the half. Yoddhas imposed themselves on the Pirates in both the departments, thereby inflicting an All-Out on Patna just 7 minutes into the match. Patna Pirates' inability to revive their lead raider Pardeep Narwal continued to haunt them throughout the first half. Shrikant with 5 raid points scattered the Patna defense to give UP Yoddhas a cushion of 10 points.

2 super tackles from the Pirates defense and 5 raid points by the Dubki King, Pardeep Narwal embarked an excellent comeback by Patna. The first half ended with a difference of just 2 points between the teams, in favor of the Yoddhas.

No support for Pardeep Narwal from either department, concluded an easy half for the UP Yoddhas handing the 10th defeat of the tournament for the Pirates. Shrikant Jadhav was the pick of the raiders for the Yoddhas with a super 10 under his belt followed by Surender Gill with 7 points.

Match Preview: Patna Pirates will look to end their losing streak against the UP Yoddhas

The Patna Pirates and UP Yoddhas have squared off against each other a total of 7 times across PKL 5-7  and of the last 5 clashes, Pirates have had the upper hand with 3 wins under their belt. Pardeep Narwal has been the sole performer for Patna and will require support from Mohammad Esmaeil Maghsoudlu and Monu to dominate the strong defense of UP Yoddhas. Monu Goyat and Shrikant Jadhav will have to fire in the offense supporting their lead raider Rishank Devadiga. Patna desperately needs a victory to keep their hopes alive in the tournament!

Head to head: Patna Pirates vs UP Yoddhas 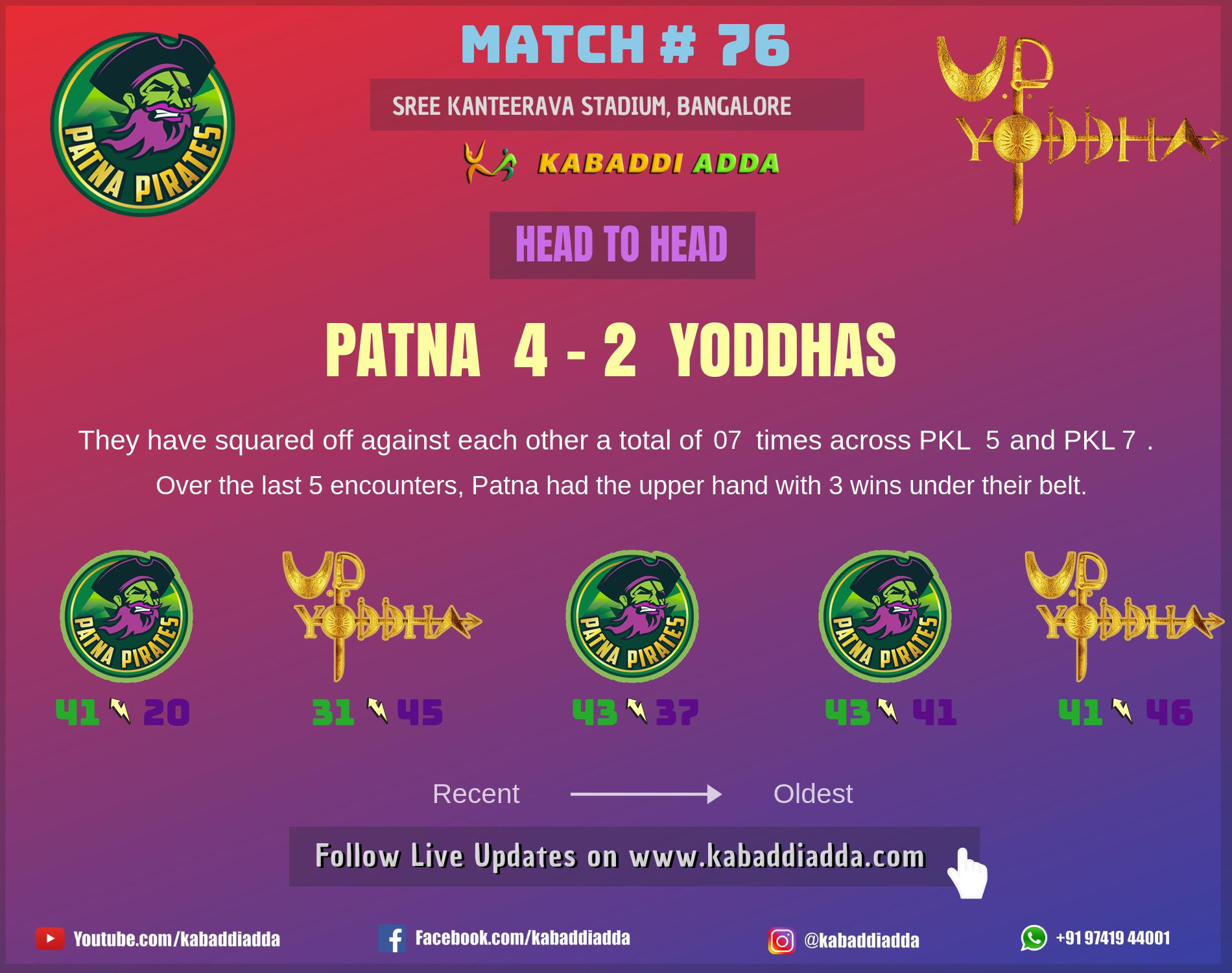