Star raider Pawan Sehrawat was once again the hero for home side Bengaluru Bulls as they beat Telugu Titans in an entertaining final match of the VIVO Pro Kabaddi League’s Bengaluru leg in front of a packed audience at the Sree Kanteerava Stadium.

The raider scored a massive 22 raid points for the Bulls but the defending champions had to struggle for their victory largely due to Siddharth Desai’s raiding prowess at the other end for the Titans. Desai finished with 22 raid points (joint best in Pro Kabaddi history) but a few errors, especially from league’s best defender Vishal Bhardwaj, proved too costly for the Titans against their South Indian rivals. 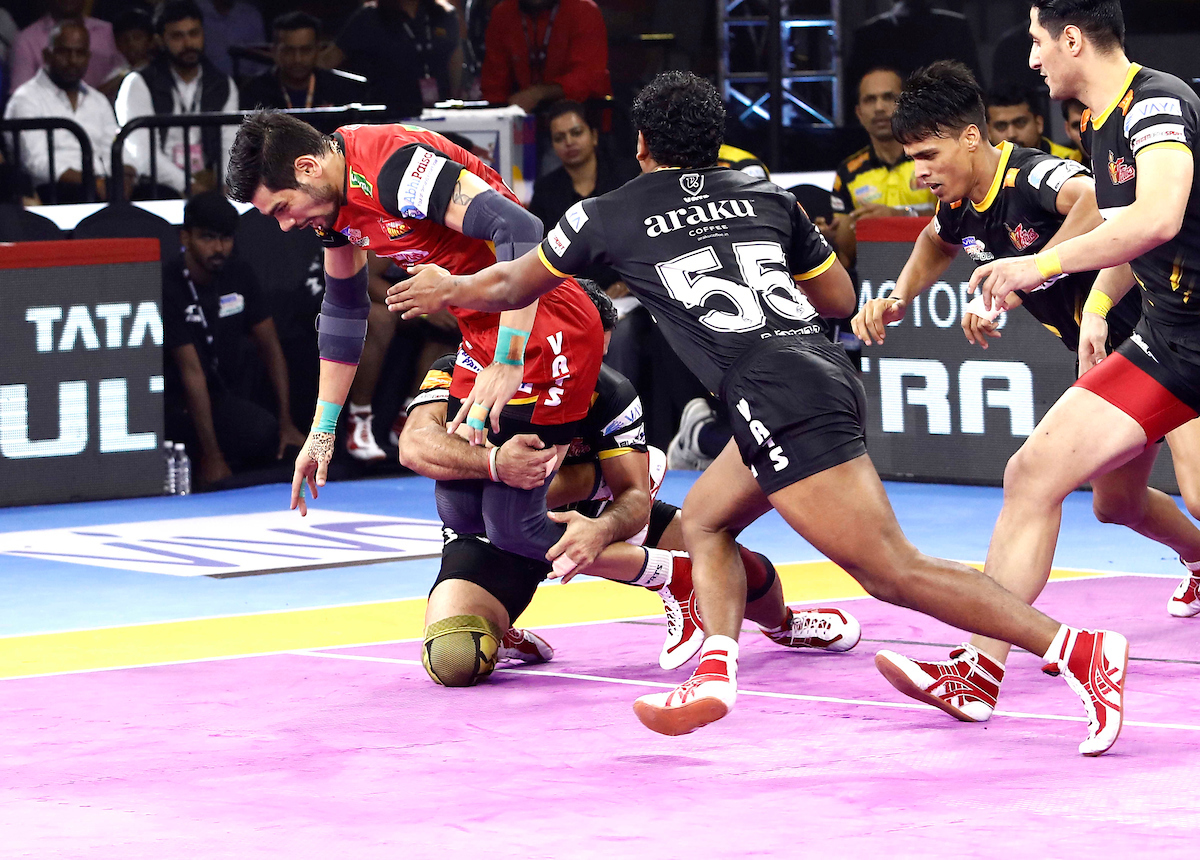 Pawan Sehrawat’s form for the Bengaluru Bulls meant Telugu Titan opted for a defensive approach from the start. Their Iranian coach Gholamreza Mazandarani sacrificed Suraj Desai for Krushna Madane, an extra defender, in the lineup with a clear strategy to of stifling the raiding duo of Pawan and Rohit Kumar. And to a certain extent, the strategy worked in an evenly contested first half that saw both sides trade blow for blow. Siddharth Desai picked up important points for the Titans in the raids while Pawan and Rohit did the same for the defending champions. Titans and Siddharth's strategy to rely on Bonus Points was however slightly bewildering and that allowed Bulls to dominate the latter stages of the first half which ended 15-12 in favour of Bengaluru. More importantly, they had the Titans in a spot of bother with just two remaining on the mat and facing an All-Out. 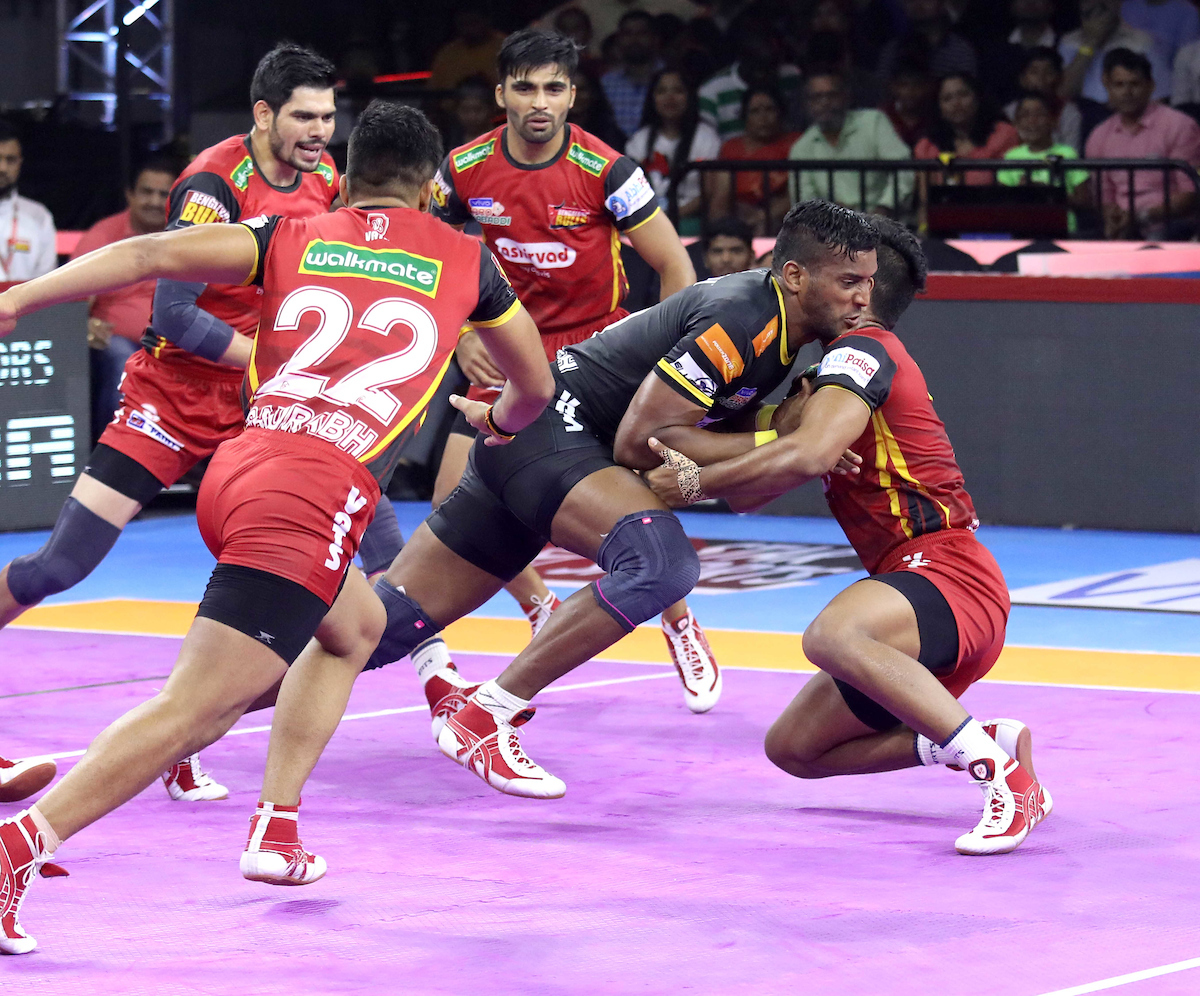 The Bulls got their first All-Out in the second minute after the restart but Telugu Titans dominated the minutes that followed with Siddharth Desai picking up some crucial points. But the Titans’ brief period of dominance ended when Pawan Sehwarat produced a Super Raid to clinch three points for the Bulls and most importantly sending the defensive trio of Vishal Bhardwaj, Abozar Mighani, and Krushna Madane to the bench. The move was followed by a tackle on Siddharth Desai as the Bulls took charge of the game once again. The home side inflicted another All-Out with seven minutes remaining to move to a nine-point lead. 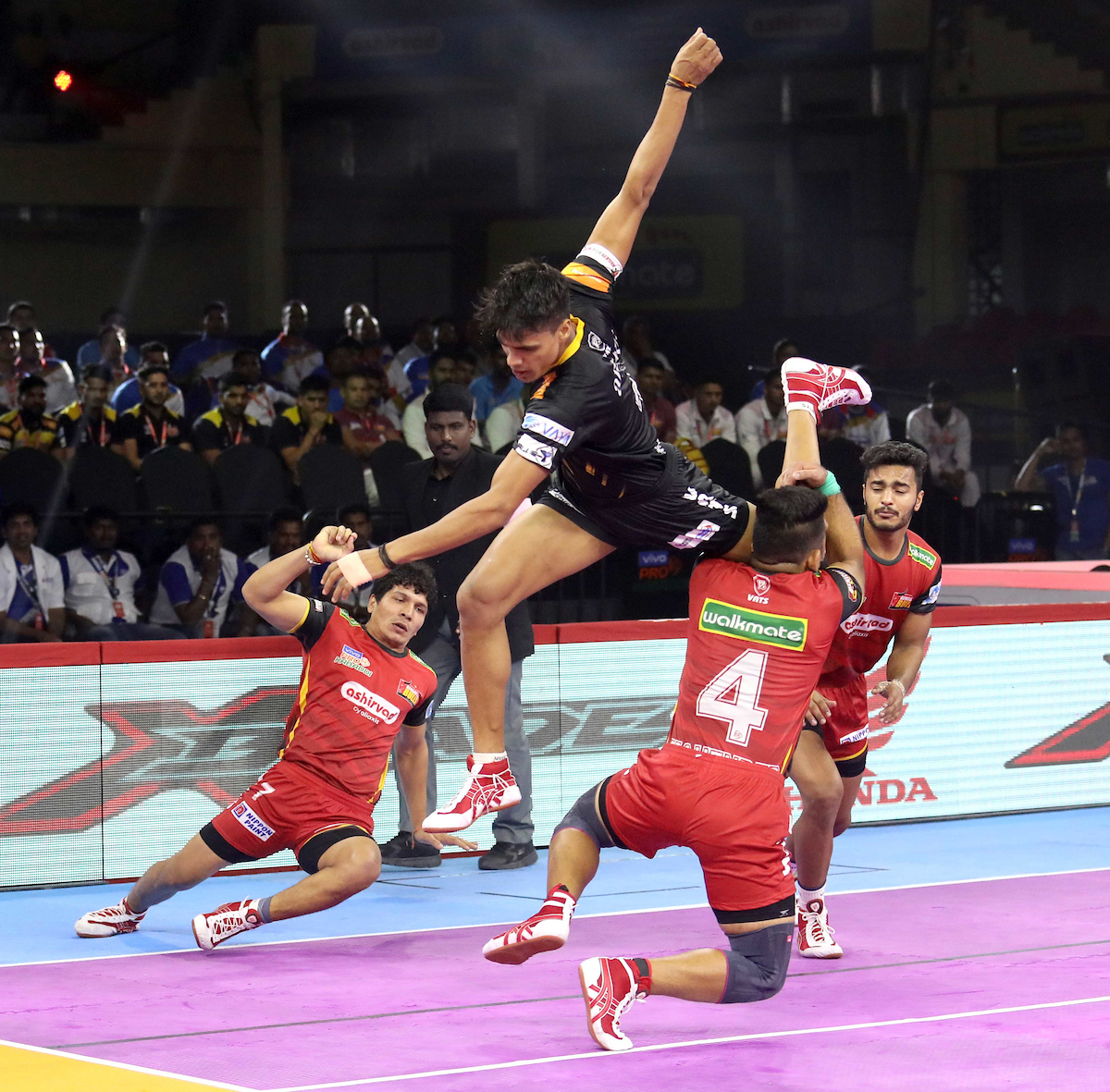 A late surge, championed by Siddharath Desai’s Baahubali-like six-point raid (taking out Mohit Sehrawat, Mahender Singh, Rohit Kumar, and Saurabh Nandal), forced an All-Out on the Bulls with under four minutes remaining. Another three-point raid by the Siddharth levelled the scores but Pawan Sehrawat rose up to the challenge, matching raid for raid in what turned out to be raiding masterclass by the sport’s very best. With the scores level at 38-38, Pawan produced an acrobatic two-point raid in the penultimate raid of the match while Siddharth Desai was not allowed to venture forward in the last move as the Bulls sacrificed a player to clinch the match.