Pawan Sehrawat was once again the chief orchestrator of attacks for Bengaluru Bulls as they defeated U Mumba 35-33 in a VIVO Pro Kabaddi League match at the Sawai Mansingh Stadium in Jaipur on Friday.

‘High Flyer’ Pawan Sehrawat scored 10 raid points for the Bulls are they produced a composed performance to clinch the fourth place in the points table and improve their chances of qualifying for their playoffs. U Mumba did have moments in the match where they looked capable of staging a comeback but unfortunately fell short by two points in a tightly contested affair.

The first half was evenly contested as expected with both teams opting a rather cautious approach due to the implications of a bad result on their playoff chances. Both teams were also hampered by injuries, with Rohit Kumar absent from the Bull’s lineup and young Arjun Deshwal missing from U Mumba’s raiding department. As expected, the Mumbai defence took an offensive approach against Bulls’ standby captain and chief raider Pawan Sehrawat and sent him to the dugout multiple times in the early minutes. But the Mumbai side could not take advantage due to the lack of quality of raiders in their ranks. And that eventually came to haunt them in the final minute of the first half where Pawan Sehrawat secured a Super Raid in a five-point move that secured the Bulls an All-Out and helped them pull clear of Mumbai. The first half ended 17-11 with the Bulls on top. 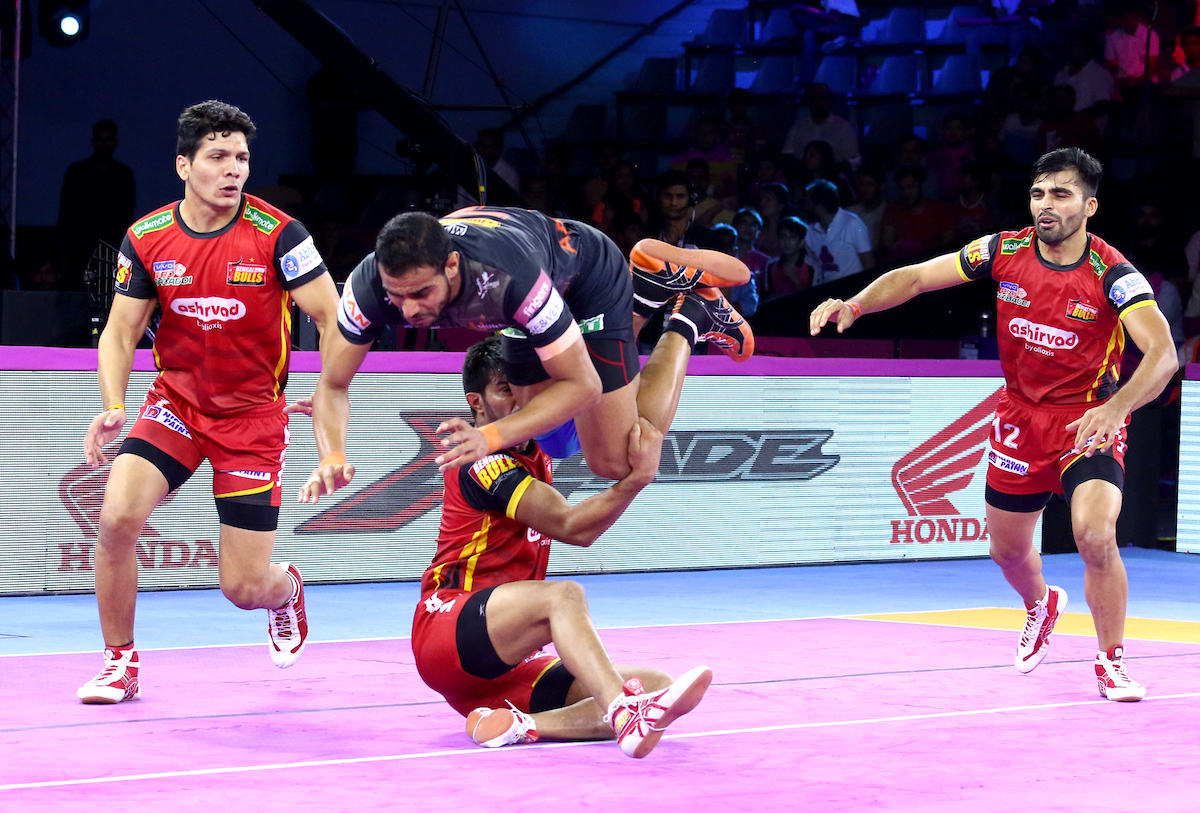 The All-Out certainly pumped up the defending champions as they started the second half on a high. Pawan Sehrawat continued his good work with the raids but it was the Bulls’ defence, particularly Saraubh Nandal, who impressed as the Bulls inflicted another All-Out on U Mumbai in the 7th minute of the half to open up a 12-point lead. Saraubh Nandal secured his High 5 as Bulls looked to sit on the lead. But cautious approaches seldom work in Kabaddi, and U Mumba stormed their way back into the match through some direct raiding by Abhishek Singh and clinched an All-Out with five minutes left in the match to make it a 4-point game. But the Bulls’ defence held firm in the dying minutes to clinch an important victory.