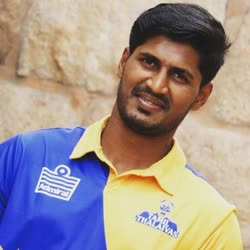 K. Prapanjan comes from the bloodline of talented kabaddi players in Tamil Nadu. Born on 29 May 1993 in a small town called Sankagiri in Salem district of Tamil Nadu, Prapanjan saw himself surrounded by Kabaddi from childhood. His father, Kumaravel, was a district-level kabaddi player which led to Prapanjan taking up the sport as a raider along with his brother and sister.

During his school-days, he showed an interest in volleyball, but it didn’t last long. After Prapanjan graduated from PSN Engineering College of Technology, Tirunelveli, he shifted on to his career path of achieving his true passion and moved to Chennai to join the Sports Authority of India.

As he kept getting better at the game, he was selected to teams playing for national-level competitions. He got a chance to train in the national camp where he met players like Anup Kumar and Ajay Thakur and got an opportunity to train with them. As a growing player, Prapanjan showed enthusiasm to learn and watched other players closely to improve his skills and master their tactics. At the camp, he was trained by Kasinathan Baskaran. Prapanjan has very good reflexes that are required by a skillful raider and his coach trained him well to make use of his capabilities to become a better raider.

Prapanjan was selected by U Mumba for the Pro Kabaddi Season 2 but the 21-year-old just played four matches and scored a total of seven points. He was mostly kept on the bench due to the brimming talent in the team and hardly got a chance to make it to the playing seven. The same story followed in the next year as well when he played four matches and scored only two points.

In PKL Season 4, he joined Telugu Titans and earned 12 raid points out of 11 matches played. He was mostly used as a substitute or an impact raider in do or die situations.

The following season, Tamil Thalaivas picked up Prapanjan and was appointed as the deputy to Ajay Thakur. He played 22 matches in the season and scored 123 raid points which made him stand out in the top raiders of the tournament. He made a name for himself as a Do-or-Die specialist and always rescued his team when required. He scored 34 points during do-or-die raids, the most by anyone from Tamil Thalaivas that season.

Prapanjan got picked up by Gujarat Fortune Giants in the PKL Season 6 auction for a hefty sum of Rs. 38 lakh after a heavy bidding war with Bengaluru Bulls. He was the costliest player bought by the team and was also appointed as the vice-captain of the team. His stellar performance continued with Gujarat as he finished with 122 points from 22 matches, the second highest after Sachin Tanwar from the Ahmedabad based franchise.

Before the start of PKL Season 7, Prapanjan was again in the auction pool and was a favorite to pick for a number of teams. He was listed at a base price of Rs. 20 lakh. While Bengal Warriors swiftly jumped in and showed their interest in the player, they got competition from Prapanjan's first team of PKL, U Mumba.

Tamil Thalaivas then jumped in as the price went up to Rs. 25 lakh. However, soon Jaipur Pink Panthers also joined in and so did Puneri Paltan with a price tag of Rs. 30 lakh. This was followed by a eavy bidding action from Paltan and the Warriors with the latter winning the war and getting the raider for a price of Rs. 55.5 lakh.

Prapanjan joined the Bengal Warriors as one of the experienced players along with Maninder Singh, and Sukesh Hegde. He was one of the major contributors for Bengal Warriors' winning run at PKL 2019 and scored 105 points from 20 matches. He was the second-highest points scorer for the PKL winners and proved helpful in dire situations.