Khelo India University games kicked off their second edition in Bangalore a few days back. The event is being hosted by Jain University. It was supposed to be held in 2021 but got postponed in the wake of Covid-19. The venue for the main events will showcase the School of Engineering and Technology campus and The Sports School campus at Kanakapura Road.

Doors opened for the Kabaddi players today morning, as per the tournament’s schedule. A total of 8 teams will be featured in the men’s and women’s format. The teams will be divided into two pools of four and will compete at the league stage. Out of them, only 4 will reach the semi-finals and the winners of the semis will clash at the finals.

Now let’s look at the action that took place on Day 1.

The inaugural match featured the Chaudhary Bansilal University vs. V.B. S Purvanchal University. The first of the game was filled with action as the score ended 20 - 18. But the second half of the game became one-sided as the players of CB university dominated the game since the first half with a score of 25 - 09. The final whistle ended 45 -27 helping CB university bag their first win.

The second match of the day featured Lovely Professional university vs. Mahatma Gandhi university. With a score of 38 - 22, the latter defeated their opponents after the final whistle. Mahatma Gandhi University players dominated the game from the beginning, leaving no space for error.

The third fixture of the boys' format was between Mahashree Dayanand University vs. Kota university. Kota boys clinched victory over their opponents as the final whistle ended with a score of 48 - 28.

The last battle of the day featured Gurunank Dev University vs. C. V. Raman University. The former team dominated their opponents with a game-winning score of 59 - 46. 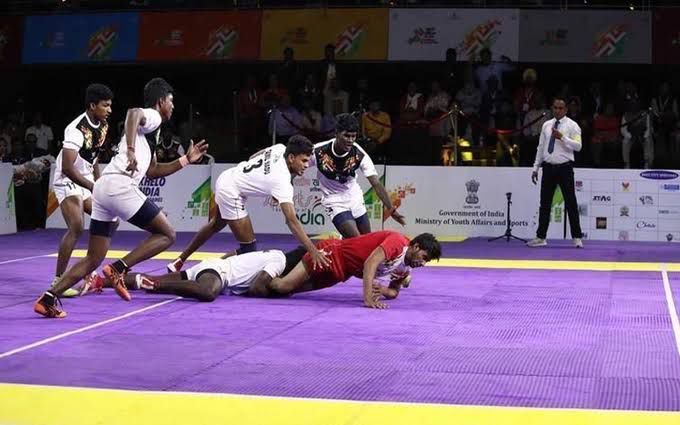 The women's format featured Mother Teresa University suffering from a last-minute defeat against Bharati Vidyapeeth University as the final whistle ended with 42 -41. After a perfect first half, fans expected their team to win the game. But with a poor performance in the second half, the result had to change.