A staggering second-half display that saw them outscore Tamil Thalaivas by 21 points gave UP Yoddha a 42-22 victory over Tamil Thalaivas at the Sawai Mansingh Stadium in Jaipur on Saturday. Up Yoddhas outplayed Tamil Thaliavas in the second half and hence scored 22 points against them, while the Tamil team could only score 8 points. Hence after winning the match, Up Yoddhas climbed onto the fourth spot in PKL table rankings.

Raiders Rahul Chaudhari and V Ajith Kumar gave Tamil Thalaivas the perfect start by helping them build a 6-2 lead inside five minutes in the first half. Hence this helped Thalaivas to reduce the UP team to three men and then after the Tamil team inflicted the first all-out of the match inside 10 minutes itself. Ajith and Chaudhari continued to add points to their teams' scores, but U.P. Yoddha managed to match them point-for-point to ensure that Tamil Thalaivas stay within touching distance on the scoreboard. With the score at 14-9 in Tamil Thalaivas favor, U.P. Yoddha raider Shrikant Jadhav went in for the final raid of the half and delivered a four-point Super Raid that not only cut his teams deficit but also reduced Tamil Thalaivas team to one man.

In the second half, U.P. Yoddhas defense tackled down Manjeet Chhillar to inflict an all-out and take a 16-15 lead in the contest. With momentum on their side, U.P. Yoddha scored six further unanswered points and gained a humungous lead in the match. After this UP team made another all-out and gained a lead of 10 points. U.P. Yoddha continued their points scoring a long run and scored nine of the next 11 points of the contest, inflicting a third all-out in under 13 minutes to take a 17-point lead.

Ran Singh and Abisheks tackle points, split by Ajiths successful raid in the last moments of the contest, not only cut the deficit to 19 but also saw the first time in the half where Tamil Thalaivas managed to score three points on the trot. Substitute Gurdeeps tackle on Ajith in the buzzer raid was the final point scored in the contest, as UP Yoddha emerged victorious by a margin of 20 points.

Match Preview: UP Yoddhas take on Tamil Thalaivas to go back to winning ways.

Both the teams have squared off against each other a total of 7 times across Season 5 to Season 7. Over the last 5 encounters, Yoddhas had the upper hand with 2 wins under their belt. Will UP Yoddhas gain winning momentum in this match?

Head to head: UP Yoddhas vs Tamil Thalaivas 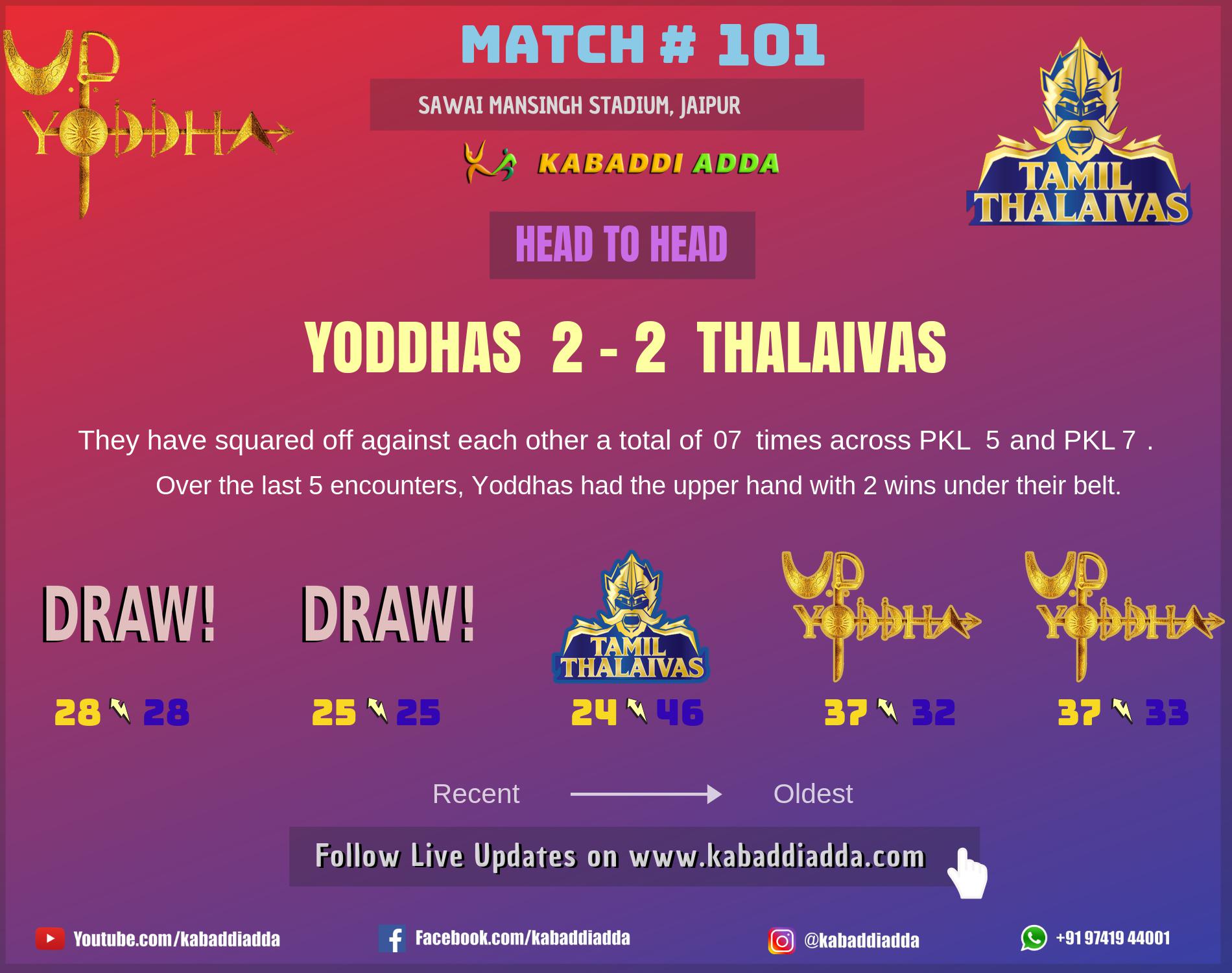