Bengaluru Bulls finished their home leg with a 40-39 win over Telugu Titans at the Sree Kanteerava Stadium in Bengaluru on Friday. It was an adrenaline riser game as both Pawan Sherawat and Siddharth Desai scored 22 raid points in the match. Bengaluru Bulls just managed to win this battle of high intensity by a score difference of one point.

In the first half of the match, both the teams were quite alert about their defense. It was not too late when 'Hi-Flyer' Pawan Sherawat stepped in and deforested the formidable-looking defense of Titans in the first half itself. Also, Siddharth Desai looked fluent in this half as he scored four raid points. But Bengaluru Bulls just managed to have the upper hand in this half as they reduced the Titans side to two men and thus the scoreline up till the first half was 15-12.

At the start of the second half, Bengaluru Bulls managed to inflict the first all-out of the match, which helped them gain a lead of seven crucial points in the match. However, some excellent defending and decisive raiding by Siddharth helped Telugu Titans reduce the deficit to three points at one stage. A Super Raid by Sehrawat though changed the complexion of the contest and seemed to take the stuffing out of Telugu Titans. With confidence now flowing through his veins, Sehrawat went about his business intelligently against Telugu Titans defense and guided his team as the hosts inflicted another to extend their lead to 32-23.

Bengaluru Bulls end their home leg on a winning note.

Siddharth then shocked and silenced the home crowd with a four-point Super Raid that enforced an all-out on Bengaluru Bulls and reduced the host's lead to 35-33. Another Super Raid by Siddharth with a little over one minute to play then tied the score at 36-36. With the match on a knifes edge, Sehrawat produced a two-point raid in the final raid of the match and Bengaluru Bulls were then happy to concede a point on the buzzer raid to secure a hard-fought battle by a difference of one point on the scoreboard.

Match Preview:  Bengaluru side takes on Telugu Titans in their last home leg

Bengaluru Bulls has faced  Telugu Titans for a total of 16 times across all seasons. Looking on to last 5 encounters Bulls have the upper hand over Titans. This clash will be the final encounter of the Bengaluru leg at  Sree Kanteerava stadium. The challenge for Bengaluru will not have clear paths as they take on the confident and formidable Telugu Titans. 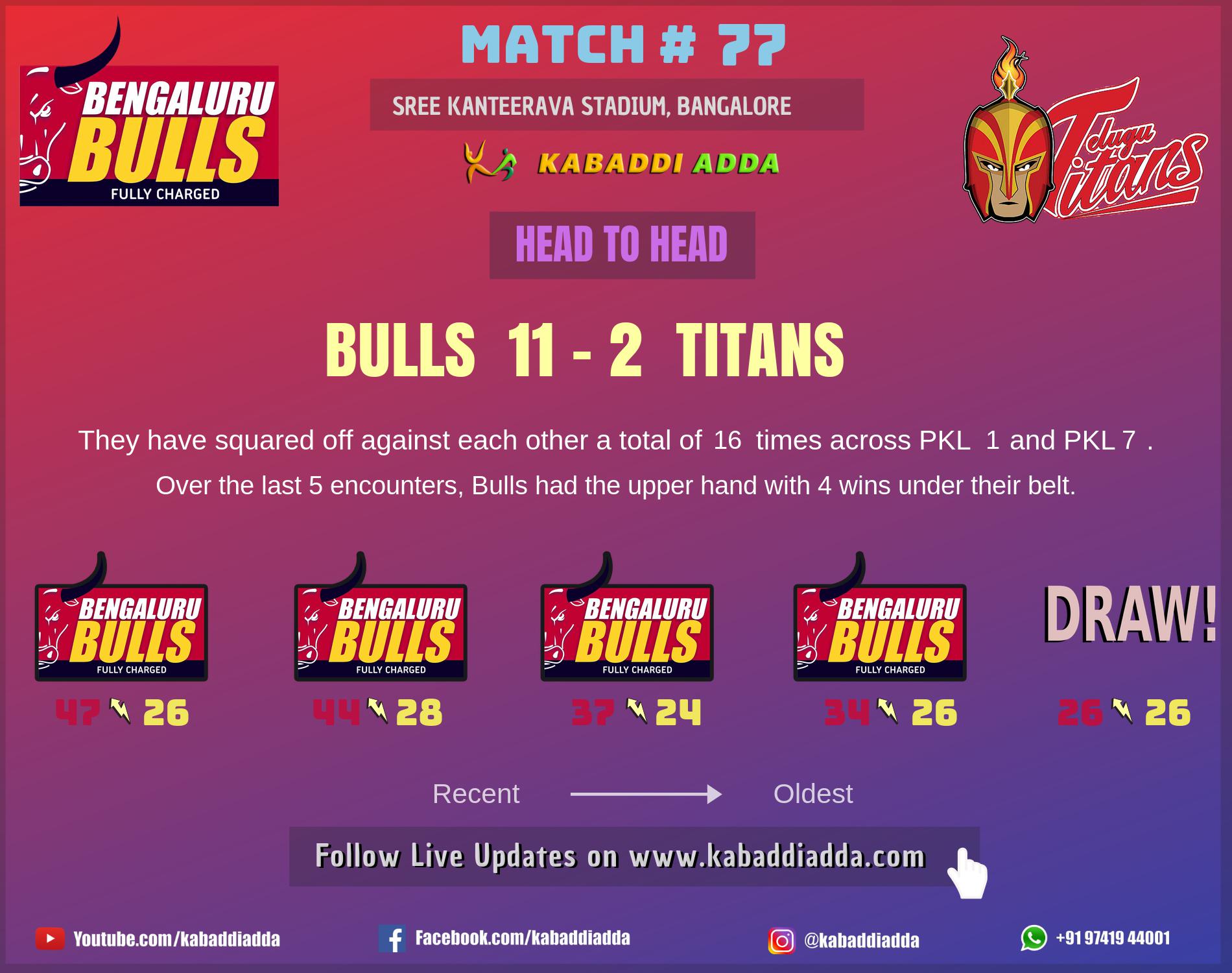