A fantastic all-round display by U Mumba helped them defeat UP Yoddhas 39-36 at the Shree Shiv Chhatrapati Sports Complex in Pune. Surinder Singh secured 6 tackle points and Fazel Atrachali with 3 tackle points were the heroes in Mumbai's defense, while Abhishek Singh led the raiding department with 11 raid points, as U Mumba displaced UP Yoddha in the fifth place of the points table.

The first half saw UP Yoddha start on the front foot, where both teams played a high line of defense and were in no mood to let the raiders have an easy day. UP clinched their first All-Out in the 9th minute and opened up a 9-point lead but U Mumba's defenders got them back into the game after the All-Out, preventing the raiders of UP to fetch points in their half. Mumbai team imposed an All-Out on the Yoddhas under two minutes remaining to half time and ended the first half with scores 16-15 in favor of the UP side.

The second half was like a pendulum where both teams were getting the lead and the other overcoming the lead till the last minute of the half. A two-point raid by Arjun Deshwal gave U Mumba the lead for the first time in the fourth minute of the half, but UP Yoddhas immediately clawed back with a Super Tackle. Defenders stepped up their game with both sides kept pushing it to the extremes in the dying minutes.

A three-point raid in the dying minutes by Rishank Devadiga made it a nervous ending for U Mumba but they managed to hold on to their nerves to secure an important win. Rishank Devadiga and Shrikant Jadhav were star performers for the Yoddhas, with 9 and 8 raid points respectively.

Last encounter - U Mumba and UP Yoddhas in season 7: UP Yoddha seal their first win

The last time these two teams met, UP Yoddhas had still not won a single game in the league, and U Mumba were at 2 wins. UP got their first win of the season, and from than these two teams have been neck and neck in terms of their fight for a qualification spot. Although Yoddhas are ahead on the points table they have a huge score difference against them. So expect a tight result or a runaway win for U Mumba. Srikanth Jadhav has sustained his form of the last few games. Surender Gill  & Rishank also were both playing like top-notch support raiders yesterday and Monu Goyat is still on the bench. U Mumba defense needs to bring their A-game to the table, else UP may just run away with the game. U Mumba have the defense to take out the right raiders of the Yoddhas. The defense might flounder though against raiders in Rishank. U Mumba have managed to extract the most from their raiders and will be looking for another performance for he left raiders. Taking UP to all-out quickly is the key to beating them and U Mumba have the raiders who can push them all out. Can Sumit who announced himself to the league the first time these two teams met spoil the U Mumba party again?

Head to head: U Mumba vs UP Yoddhas 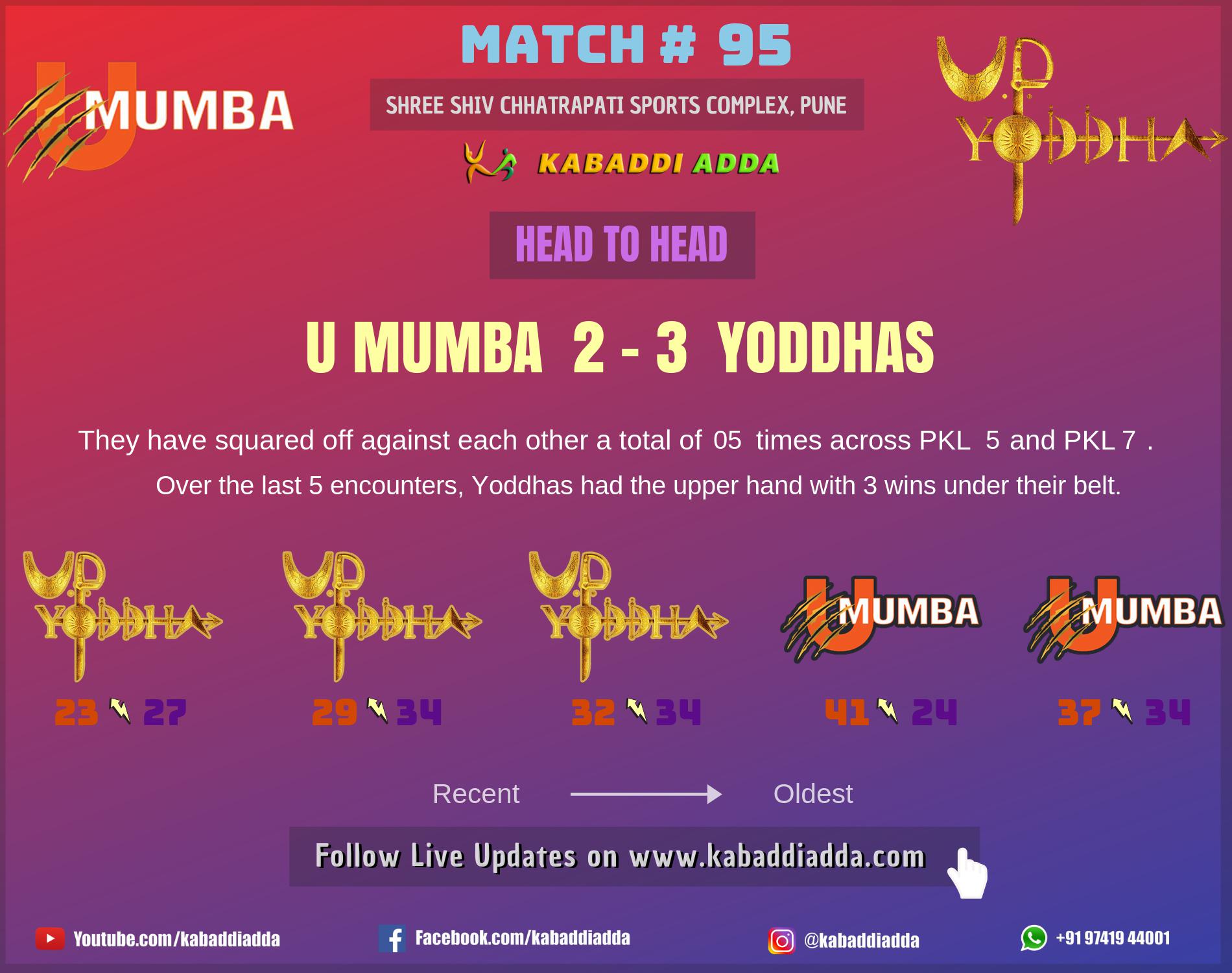