We would be taking a look at Dabang Delhi, who had a wonderful run this season, as the team went on to win the 8th season of PKL. Read on for more information.

Coming into this season as the runners-up of the previous edition, Delhi wanted to leave a mark this season. The team came quite close to winning the PKL 7, but were defeated by Bengal Warriors in the final. And quite supposedly, the team had a dream start to the season, remaining unbeaten in the first 7 games of the season. But the team was dealt with a few injuries caused to their key players like Ajay Thakur and Naveen Kumar during their campaign, which affected the team to a certain degree.

But the team managed to come back on track after a few games. Delhi finished the league stage winning 12 out of their 22 games, to end up on 75 points, finishing just behind Patna Pirates in the standings. Dabang Delhi became the 2nd team after Patna to qualify for the playoffs. Delhi then went on to defeat Bengaluru in the 2nd semi-final, and then also managed to emerge victorious in the final against Patna Pirates to win the tournament. 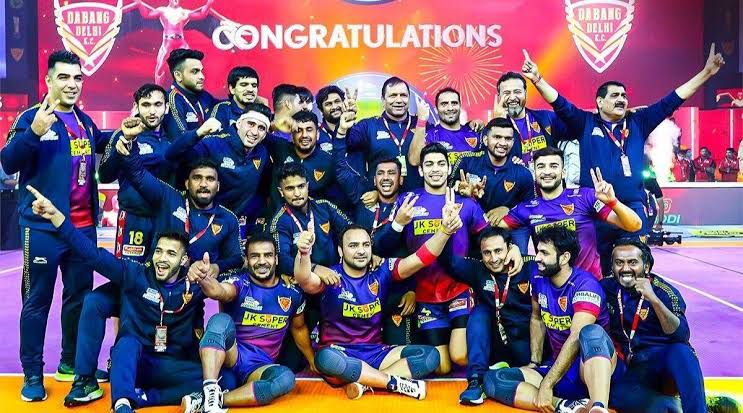 For Dabang Delhi, Naveen Kumar proved to be the most successful raider this season. In this season of PKL, Naveen scored a total of 207 raid points, at an average strike rate of 57.6%. Despite starting in a limited no of outings, Naveen spent an average of 65.19% on the mat. Among the defenders, Manjeet Chillar was the most successful defender for the team. Manjeet made a total of 130 tackles this season, scoring 52 tackle points. The defender spent an average time of 81.28% on the mat, with an average success assists of 23%.

Overall, it was a great performance from the team, excelling in both the departments, and also performing really well in the big games. Despite a campaign that witnessed injuries to a few players, Delhi managed to deliver well throughout the league, and were the deserving winners of the Pro Kabaddi League this season, winning the league for the 1st time.