UP Yoddha produced some great performances throughout the season in the league stage, also qualifying for the semi-finals. but the team lost out on the finals berth to Patna Pirates. Read on for more information.

After a good campaign last time around, UP Yoddha wanted to bolster the squad with new additions in the team. The franchise managed to buy Pardeep Narwal for a whopping 1.65 crs in the auction, adding the much needed experienced pro to the squad. UP retained Nitesh Kumar, Surender Gill, Sumit and Ashu Singh for this season.

UP Yoddha didn't have the best of starts to the 8th season, winning only 4 games in the 1st half of the season. Even in the beginning phase of the 2nd half, the team seemed to struggle in terms of winning the games. But UP made a fantastic comeback towards the end phase, winning 5 of their last 6 games. The team ended the league stage on 68 points, winning 10 of their 22 games, also becoming the 3rd team to qualify for the playoffs after Patna and Delhi. In the playoffs, UP defeated Puneri Paltan in the eliminator, but suffered a defeat at the hands of Patna Pirates in the 1st semi final, failing to qualify for the finals. 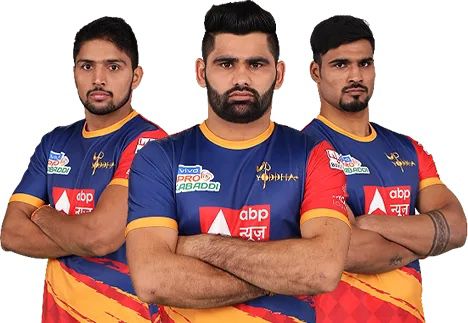 Overall, UP Yoddha had a good season, excelling in both the departments big time. UP was ranked 2nd in terms of the raid points scored and 4th in terms of the total tackle points. Coach Jasveer Singh would be satisfied with the way UP has performed in this season, as the  team would look forward to compete for the title in the next season, with what is surely a mighty unit.